How should I add lighting to a low ceiling basement?

I have a basement ceiling that's around 6'6" high and currently the lights are standard bulb outlets that are attached to the beams so they sit down at eye level in the room. This means when you're walking around you tend to accidentally back up into exposed lightbulbs often.

I'd like to put some sort of recessed lighting between the beams out of the headroom. I can't seem to find a recessed lighting can that fits within a 6inch beam depth and looks appealing (most are supposed to be burred in the ceiling with trim put on after). I'd like to avoid using long florescent bulbs and stick with standard outlets or some sort of LED bulb. I will be using CFL's or LED bulbs so heat isn't going to be an issue next to the wood. 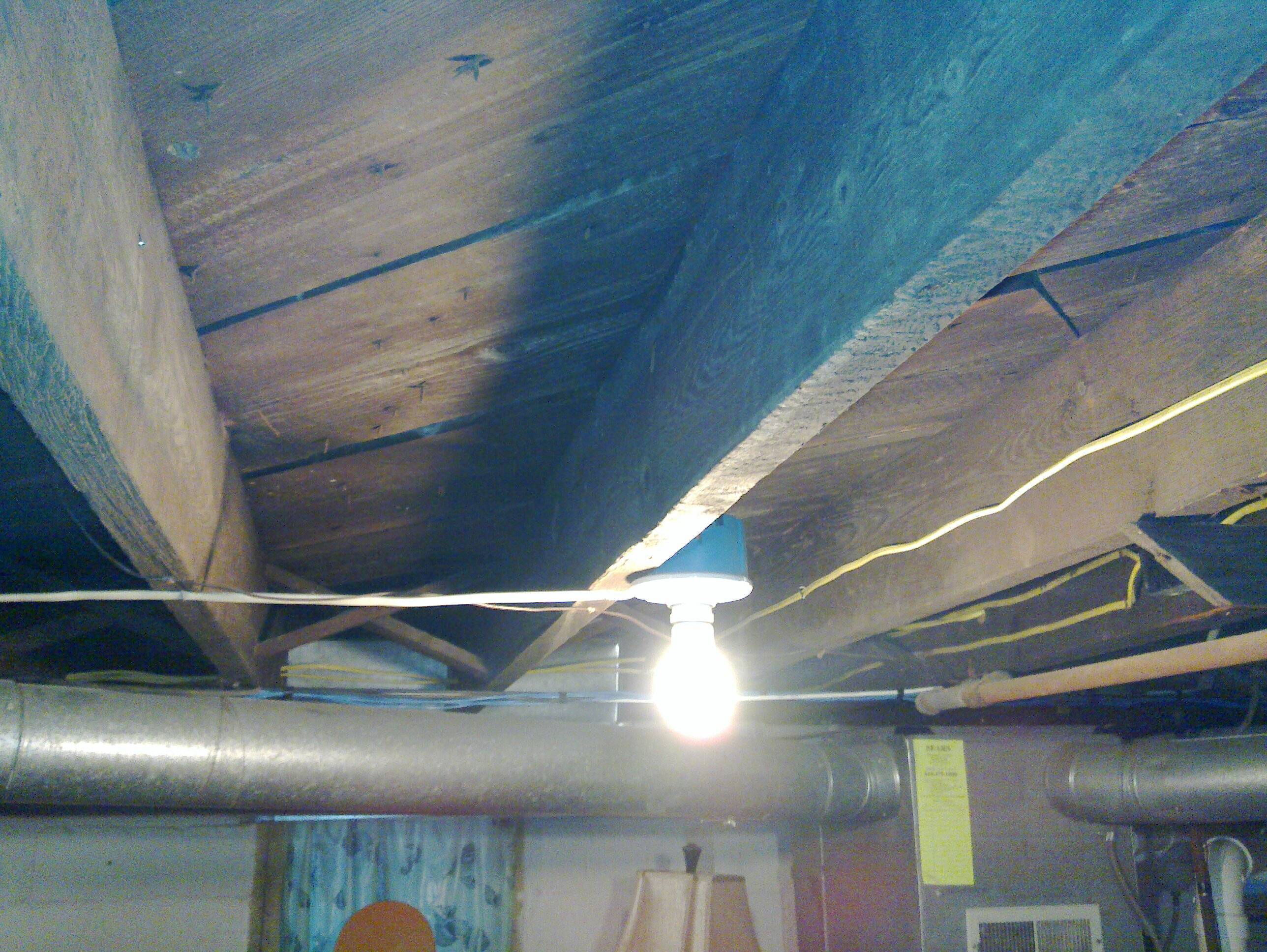 *Updated with a picture -As you can see the current light sockets are placed below the beams. My original thought was to just move them higher up, add more, and put in smaller CFL bulbs. I'm trying to find a more aesthetic looking idea for the basement.

I would say pull the fixture off the beam itself and attach it in between the beams. Then you could get some track lighting that would hang down low enough to provide sufficient light, yet not drop below the beam line. Something like the picture here would work: 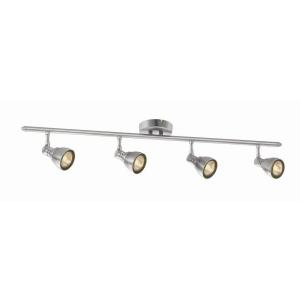 Does the lighting have to be on the ceiling? I'm thinking you might want to go with wall sconces.

I have fluorescent tube lights in my crawlspace (talk about low headroom..). There's two fixtures each with two bulbs, which adequately light an area about 20' x 10' (and 4' high). They're mounted so they are centered between joists, and the middle of the bulb is right at the bottom of the joist (so the bulb hangs down about 1/2" below).

One of these was already there when I bought the place, it is hung using chains from hooks screwed into the subfloor above. I actually just put the other one up on the weekend, and I just cut a couple pieces of 2x4 to span between the joists, mounted them at the correct height, then just screwed the fixture to them (they're placed at both ends). 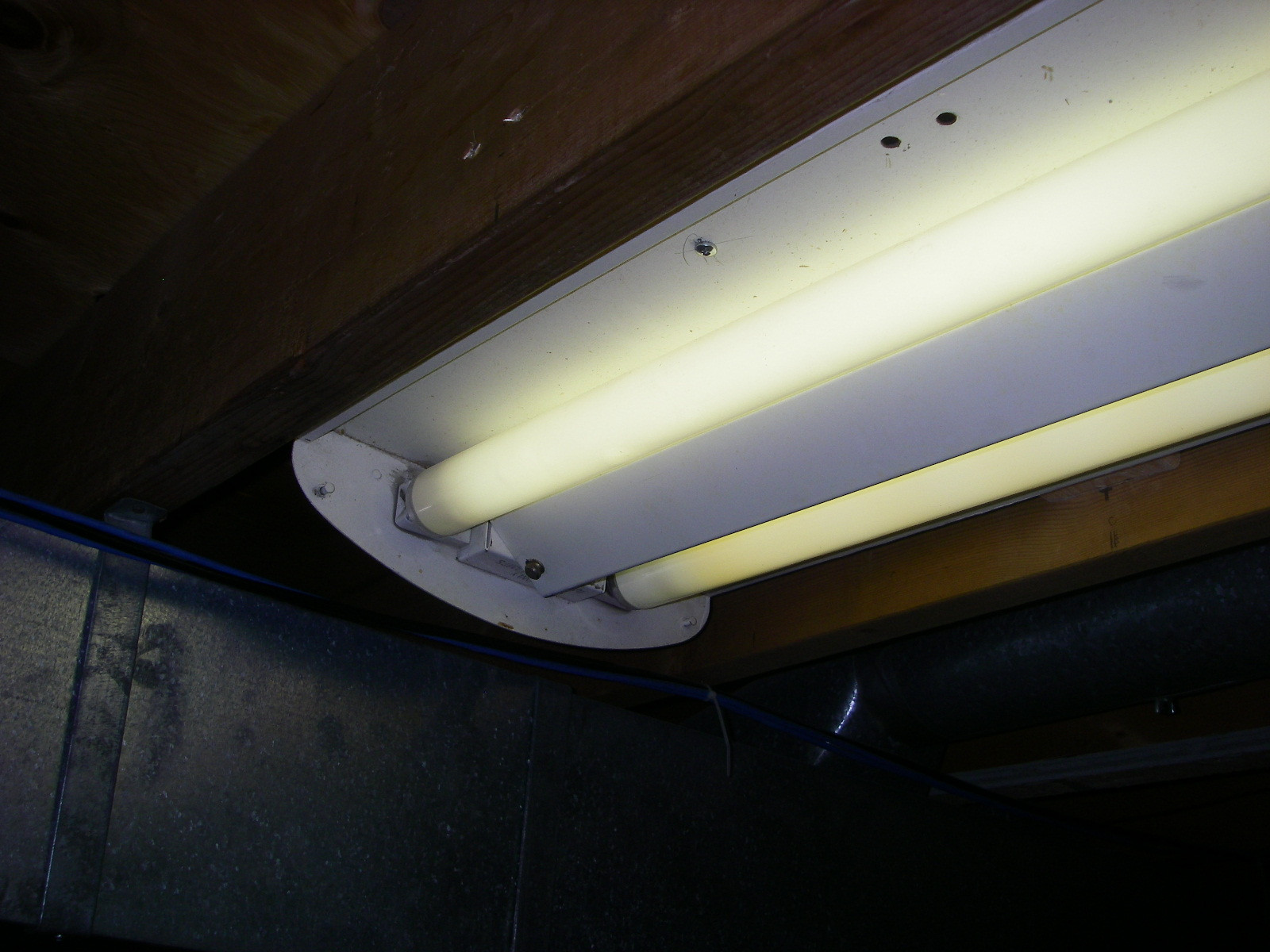 I should also point out, I had an electrical inspection done after I moved in (for insurance because of aluminum wiring). The existing fixture had an extension cord end on it, so it plugged into a socket. The inspector told me that wasn't allowed, as a permanent fixture couldn't have a plug - so I had to hardwire it (there was another switched screw-in type bulb in another part of the crawlspace, so it just went to there). The new one I just put in is obviously also hardwired to that.

I don't know if this fits your exact situation.

The solutions to lighting rooms with low ceilings is often to use indirect lighting around the periphery of the room. There are many types of wall lighting available. Perhaps indirect lighting bounced off light-colored walls… or maybe lighting placed along the upper-most walls pointing upward to provide diffused, ambient lighting. 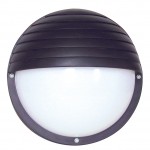 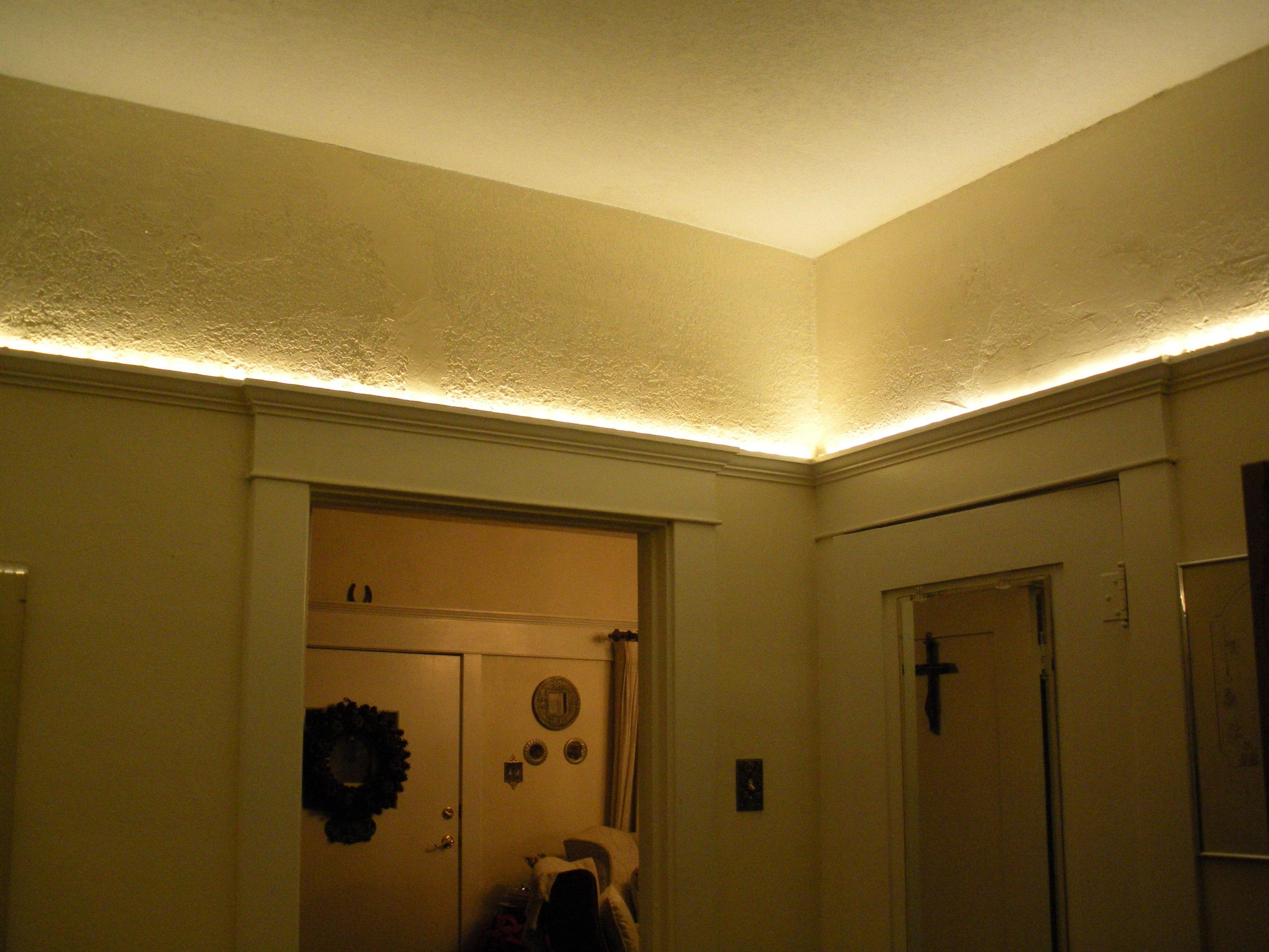 I'm not sure how big an area you're trying to cover, and how much light you need, but you might look into rope lights or LED ribbon lights to see if they'll do for what you need.

You could buy drop ceiling that doesn't stick out into the room. I believe it's called Ceiling Max. It nails to the inside of the ceiling rafters, so its flush and doesnt stick out at all. That's what I'm planning on installing in my basement.

I have a similar situation in my basement, and one of the things that I thought of doing was to install track lighting on the side of the floor joists, close to the bottom so that the lights would be just out of the way, but still low enough that I wouldn't have heavy shadows cast from neighboring joists (I have some fluorescent strip lights mounted between joists; the contrast between the lighted area directly underneath and the shadowed area just a little to either side makes it difficult to see).

I've also thought about finishing the ceiling with drywall, or installing a drop ceiling; either of those two ways, I'd be using can lights recessed into the ceiling.

I would try to find some recessed can lighting that could fit in the dept between the joices and put a trim ring on the outside. I think that would look OK.

If you use track lighting, make sure you cross the beams of light instead of pointing the track to the nearest wall. This way you will get more even lighting across the whole area. It can make a big difference if you are trying to light a larger space.

Not the answer you're looking for? Browse other questions tagged lighting basement recessed-lighting or ask your own question.

2
Better life span for halogen bulbs in ceiling lighting?
6
What recessed lighting technology is recommended for LED?
4
How can I convert my under cabinet lighting from halogen to LED?
5
What can I do to avoid incandescent bulbs for my 3-bulb ceiling fan, yet maintain brightness?
2
Using 3" (or 4") recessed lights with GU10 bulbs for ambient (not accent) lighting
0
How to cover the metal showing in recessed lighting?
2
Convert this can to a "standard" light socket?
0
How to add grounded junction boxes when installing recessed lighting?
0
LED 12v Not at Full Brightness