I have two sections of 3x12" wood that have been out in the weather for a few years and are now bowed across the 12" width of the wood. The dip is pretty severe, maybe 1/2 an inch? It seems like sanding would take way too long.

What would be the easiest way to flatten them out again? Is there a tool designed to do something like this?

The power tool you would use to take the board down would be a thickness planer: 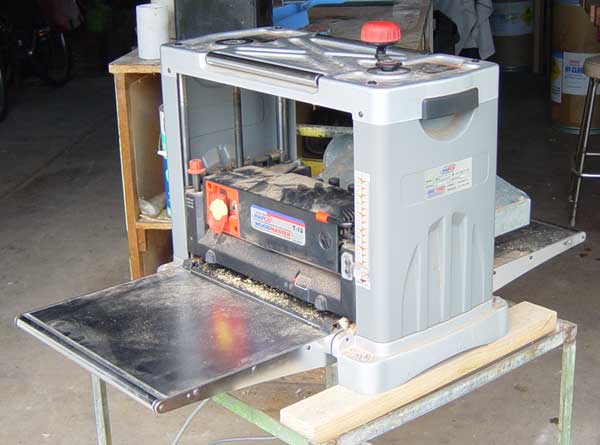 It has an adjustable cutting head and you run the board through it in successive passes to shave off the surface.

However, unless you do a lot of rough lumbar milling or are into fine woodworking, it would probably be silly to buy one. Maybe you can rent / borrow?

Note that a thickness planer is good at making 2 faces parallel, but it won't be much help if the wood is also twisted or bent along its length. The twist will just follow through the planer and you will end up with a twisted board with 2 parallel (but not planar) faces.

Edit about the suitability of thickness planer:

Several people have pointed out that to use a thickness planer you are "supposed" to have one face flat already. I guess that's optimal but I have used a thickness planer many times to "save" cupped boards. If you have a great piece of wood, you might as well try something, right?

You can use a tool called a Jointer to fix imperfections in lumber. The jointer has an infeed and outfeed table that are slightly different in height. The cutter removes a small amount of wood from one of the faces/edges of the board until the board is flat.

If you only have a planer and you don't want to buy a jointer you could try a planer sled.

You can bend the boards over hot steam or fire until they are not warped anymore, then use a plane to flatten them. This requires some practicing, so if you have a shop nearby with heavy machinery, ask them to fix the boards (if they are worth it).

The distortions come from moisture and uneven drying, and can be fixed by using moisture, drying and physical force.

I have a book called The Furniture Doctor which has been in print for a long time so your library is likely to have a copy. In it, the author describes treating this sort of warpage by laying the wood out on the grass in the early morning with some rocks or concrete blocks on it. Apparently the morning dew will moisten one side and allow some of the cupping to be alleviated.At that point you could plane it and lose less wood.

I have not tried it so I can't speak for its effectiveness.

The surface planer, BTW, is something that a serious woodworker might own and most woodworking clubs will have one.

I have however dealt with wood that has been in the weather as you describe and it has generally not been worth trying to plane and use for anything. The sun and rain cause a lot of deterioration. However that will depend on how long it's been outside and how thick the wood is and several other factors that i"m probably forgetting. If you like the weathered look than it's great.

You would need to get them machined.

You could try to do it yourself with a electric planer. But would be a pain.

You could maybe turn them around, put them on 2 stands with some weight in the centre an leave them a few days.

Not the answer you're looking for? Browse other questions tagged wood woodworking or ask your own question.

4
How do I remove paint from a wood floor?
3
How do I remove multiple layers of paint from wooden entrance ledge?
2
Does thining wood filler make it crack when drying?
0
Using wood filler on garden furniture
2
What can I do about 2x4 wood expansion joints that are above the surface of the concrete?
4
How to fix wood stain drips?
0
'Flatten' satin sheen on wood stain
1
How to remove about 1/4" of wood from in-place beam?
0
How to correct blotchy brush marks on stained wood?
0
Refinishing Outdoor Wood Table