What kind of damp do we have?

We have a damp problem in a 1920s semi-detached house we moved into 8 weeks ago. We are not sure if it's a condensation problem, or penetration from the outside, or even rising damp on the ground floor. I have taken pictures of the affected areas: 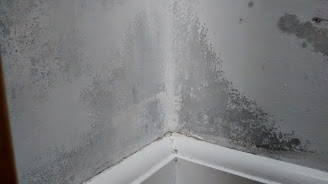 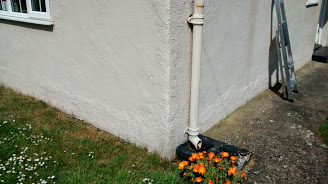 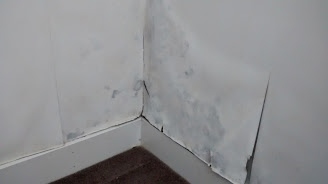 The full set can be found here:

The windows are all PVC which looks completely sealed - there don't appear to be any trickle vents. We do notice occasional condensation on the windows in the morning. We need to get the windows replaced with wooden-framed windows again (in accordance with local building preservation-area regulations - originally, this house had wooden-framed windows). Would doing this help? Is there anything we should look out for? Can we get trickle vents on wooden frames?

The walls do not have a cavity. I think there is just two layers of brick, with an external render. The external walls are often quite cold to the touch.

We tried to clean the affected areas with Auro Mould Eliminator a few weeks ago, but it's either been ineffective or it's just the stains that remain. We are going to repaint anyway, but before that, we want to take some preventative measures so that the problem doesn't come back and are looking for advice.

We have been suggested to get the external render of the house looked at in case there are cracks that water is coming in through and get it patched up. Searching around online, people advise getting dehumidifiers to help with condensation. Are there any other measures we can take?

I would suggest you have someone come in with an infrared scanner and make a sweep of the building to determine areas where moisture may be coming from. If the water is coming in from outside through the roof, floor etc., infrared should be able to see it. knowing where the sources of moisture are will help you in making decisions on how to mitigate it.

If this problem is internal condensation, you may need to install some sort of ventilation system. Dehumidifiers certainly would help, but depending on the areas in the house creating the problem may be addressed with better ventilation. Bathrooms, laundry are prime areas for excess moisture.

Since this condition is creating mildew and mold (seen in pics) , I think you should have some professional evaluation before the mold situation becomes a serious health issue.

Note: my answer demonstrates an advanced beginner level of knowledge of building science. I know just enough to think I know far more than I most likely really do, so take this answer with a grain of salt and consult a professional as well!

Rand and Shirlock are probably onto something. Let me offer an alternative or perhaps more general hypothesis. Your external walls are made out of porous masonry--brick and stucco (our word for "rendering" here in the 'states). These materials are "reservoir walls" capable of holding a lot of water when they get wet. Since you're in the UK, it's a wet, rainy climate, so the exterior walls can be expected to get wet a lot. Stop the presses!

Such walls have historically worked well because water that enters the wall is able to dry to both the outside and the inside. Outside, sunlight will warm up the wall and dry off the surface, while simultaneously driving water toward the inside in a phenomenon known as "inward solar vapor drive." And heat generated from interior heating appliances dried off the inside of the wall. So where did the water go? It was mostly vaporized and became water vapor.

Now, in old houses, the entire building envelope was really leaky. So excess water in the air could easily leave the house in windy, drafty weather through the myriad cracks and holes in the building envelope. In modern times, we now know that sealing up air leaks improves a building's performance. This may have been done to your house, which I suspect since you mentioned that the historical wood windows have been replaced with modern vinyl ones. However, if we do this to a house with masonry walls and no insulation (you said "The external walls are often quite cold to the touch"), suddenly the humidity in the interior air has nowhere to go. What happens to warm, humid interior air? It condenses into water on the first cold surface it hits. And if your exterior walls are un-insulated and cold to the touch from the interior, that's where the water is going to appear.

What can you do about this? Well, you have a few options:

I am by no means knowledgeable in these matters in the least, so take this for what it's worth, but there is something I’ve heard recently and it may pertain to your situation. Modern exterior wall construction has a vapor barrier that is on the living space side of the wall, which prevents the moisture from our bodies, cooking, bathing, houseplants etc. to penetrate and condensate inside the wall when it’s colder outside.

In the 1920’s masonry walls like you describe wouldn’t have a vapor barrier and would instead rely on the wall’s ability to naturally evaporate this moisture through the brick and/or stucco to the atmosphere. In the case of stucco, if you needed to spruce up the outside of your home you’d hire a mason and they’d apply a fresh thin coat of cement, which I think is called whitewashing.

Then came along modern, plasticized, exterior paints, which now puts a vapor barrier on these old masonry walls where none was before, and not on the inside of the wall where it should be, but on the outside. Now the wall can saturate, because it can no longer release the moisture to the atmosphere.

What you probably need to do is hire a company that can coordinate sandblasting off the paint and restore the exterior to a 1920’s era condition, while replacing the windows to the wooden ones. And then maybe someone can come up with a creative process to speed up the drying out on the inside, so that the interior walls can be repaired and restored. After that anyway that you can form an interior vapor barrier would help, several coats of a high quality latex paint, vinyl wallpaper and so on.

3
What are my options for replacing or upgrading my window screens?
2
Appearance of damp after dpc injection - can "good enough" plaster go soft?
3
A/C Air Handler Leaking Water Everywhere
1
So much humidity in home over the winter
9
Is there a way to remove condensation and clean inside a double pane window?
3
If it is important to humidify the air in winter for one's health, how then do you prevent condensation from forming on the inside of windows?