Is there an easy way to make a square hole in plaster/brick to put an electrical outlet box in?

I am about to fix a few new sockets, I can run the cables down the back of some built in cupboards, but would rather not use surface mounted sockets. 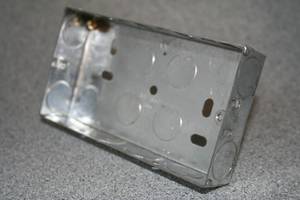 I do not have a SDS drill, just a standard hammer drill.

A Fein Multimaster tool (or some knockoffs) work great for this type of work. You have the ability to use a blade where you can 'stab' the wall and get nice clean lines and corners.

I would make sure they can handle brick though. I believe they can with a good blade.

If you are going to decorate after, it may be easiest to just use a chisel and hammer to cut out a bit more than needed, fit the box, then re-plaster around the outlet box. Not elegant, but fast and easy.

Standard hammer drill here too, and I don't quite understand the fuss about SDS drills: mine already goes into plaster and brick like a knife into butter (not a hot knife, mind you). Some bricks randomly need more persuasion than most.

I just drill a grid of holes - spaced maybe 2cm apart - and then whack out the remainder with chisel and hammer. Since I'm chasing into the wall anyway, I normally also make cuts with my angle grinder, but that's less effective that it might at first sound, because it doesn't help me get the corners out, which I find the hardest part of the job. Perhaps a 115mm grinder would work better (mine's a 230mm model), as it could get closer to the corner. But could it make the depth?

When I hit a "hard" brick, sometimes I just give up on that hole and move on to the next - it isn't necessary to drill every single hole, or to drill them in any particular place (except the edges I suppose): the point is just to weaken the material to be removed, relative to the rest of the wall. (I'm pretty sure that hammering too hard can cause nearby plaster to detach, so I try to get through the plaster and the first of the brick with only "light" blows.)

In one wall, I took the opportunity to install two outlets in one session: directly opposite each other. That let me just drill as far as the bit would go from each side, and then whack out the middle without mercy. That worked quite well, but depends on wanting an outlet on the other side of the wall.

Judging by your pictured outlet box, I would recommend hearty use of the angle grinder trick (4x4 inch boxes are more usual here): make cuts along the length of the box, and then drive the chisel between the remaining slices of wall: one of them will break out. Then clean up the corners. That's if you can stomach the dust, and it assumes you have an angle grinder.

Not the answer you're looking for? Browse other questions tagged electrical walls plaster or ask your own question.

11
What is this drill guide/template used when fixing electrical sockets called and where do I buy one?

15
How do I run ethernet, speaker wire, and coax through a wall into a crawlspace?
1
How do I cut an access panel in an inside wall?
3
Is this a valid way to add an electrical outlet?
2
Is there a way to cover a hole for cables that does not require a wall box?
3
A gentler way to chase electrical sockets
0
Can I run NM 12 ga circuits on a running board or MultiCable Staples across floor joists use in a basement with an unfinished ceiling?
3
Is it OK in the UK for mains sockets to be mounted upside-down?
0
Adding 240v (NEMA 14-50) outlet right behind breaker panel