How do I mount a ceiling box in 4" thick ceiling?

I'm trying to install a ceiling light in two rooms that didn't previously have hard-wired lighting. After cutting a 4" hole for a circular ceiling box (using a hole saw attached to my drill) I'm finding that the ceiling box I've got might not fit: 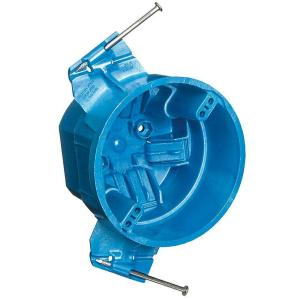 The problem is that the ceiling is too thick. There is the original plaster & lath ceiling, and below that another layer of strapping and a fiberboard ceiling. All together, the thickness is 3 or 4". If I set the ceiling box in the hole from the attic, it sits very far from the ceiling surface you'd see from the room below. Because of the distance, I don't think it would be possible to mount a light fixture there.

So, how do I mount a ceiling box in this deep/thick ceiling? Is there a special box (or extension?) for situations like this? Do I need to somehow remove some of the upper layer of old ceiling in order to reduce the depth? Any special concerns for supporting the box?

I agree with answer #1 with the following exception: Do not use longer screws to attach the fixture. Find a suitable box with extensions as needed to make the box opening flush with the ceiling surface. You do not want a gap between the box and fixture the could allow heat and spark from a fault in the box to escape. Here are products that I would use in your situation. These may not be available at home improvement store but are available at electrical suppliers who service contractors.

This combination gives you a box 5 3/4" deep. Adjust the support on the attic studs to make this flush with ceiling.

Remember that it is important to not leave a gap that could cause a smoldering fire in the voids of the ceiling structure. This is the reason that most electrical codes require that box faces be flush with the finished surface.

I'd recommend a braced box. You can mount a 2x4 on the inside of the joist to change the size from 26" to 24" inches. Matter of fact, you may want to put one on both joists. Make sure you give some length to the 2x4 to balance the potential use of a fan.

If the ceiling is really 3" to 4" thick, then you'll want to get the deepest box you can find and then buy some longer screws to mount the light. You need to check your local regulations, but I would guess that as long as the plaster and lath portion is covered by the box (since the wood is flamable, but the sheet rock is not), you should be ok.

Check your regs to be sure!

Not the answer you're looking for? Browse other questions tagged electrical ceiling or ask your own question.

5
Are there octagonal box extenders that are slimmer than 1 1/2" deep?
9
How can I install a recessed light container in an abnormally thick ceiling?
0
How do I fill holes around a newly fitted ceiling light socket?
9
How to hang modern fixture over old square recessed box?
1
No Junction Box for Ceiling Light
1
Repair Ceiling Hole for Round old work ceiling box
3
How can I mount a light to a square junction box?
1
Any way to mount a ceiling fan using a rectangular "wall" box?
1
How should I wire / connect a new ceiling light to this ceiling junction box?
1
Installing a ceiling fan onto an old pancake box