Outside water pipe covered in ice

A month ago my house's sprinkler pipe formed a hole and exploded due to pressure. This was caused by the fact that I had forgotten to shut the water off to my sprinkler system before it got too cold. I then shut the water off to the sprinkler system from inside my house. Today, I walked outside and there is a pipe that is completely covered in ice outside my house. It's located next to the sprinkler pipe. I'm not sure what I should do about this. Any thoughts? 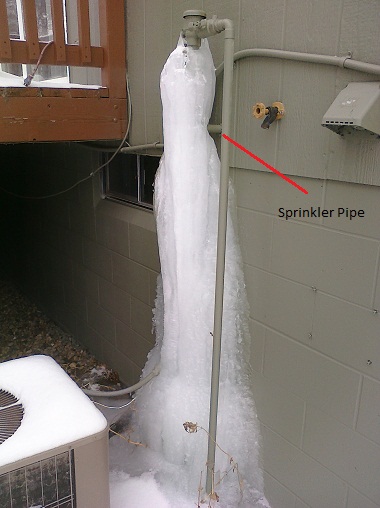 It looks to me like it's still the sprinkler pipe, they're attached at the top? So that line that's covered in ice is probably the supply that comes from inside your house, and the line going down goes out to the sprinkler system, and there is a backflow preventer at the very top where they connect.

When you shut it off, there was still water in the line going outside, and it's likely that it burst. The pattern of ice looks like there was water flowing from the backflow preventer. There's a lot of water there though, I don't think the water in the lines would be enough to make that much ice. You should double-check that you shut that line off. You should be able to see where that comes into the house, and there should be a valve on it. If that line isn't shut off, and has also burst, then as soon as the ice melts it will start leaking/spraying again, and as it gets cold freeze again, etc.

I'd say you have another shutoff that you missed (eg, did you shut off the sillcock (outside tap) next to the sprinkler instead of this line?). In the spring, you'll have to replace part of that pipe or the backflow preventer, depending on what broke.

How many turns does your shutoff switch take to close? If it is more than half a turn, it's a gate valve and not a ball valve. Gate valves are inferior to ball valves and rarely do they fully close. If this is the case, you still have pressure in your sprinkler system (though the flow-rate will be vastly decreased.) Once a ball valve is in place, the sprinklers will be completely shut off.

As far as the broken piece of pipe goes, it looks like a vacuum breaker. (See: http://en.wikipedia.org/wiki/File:AVB-1.JPG ) When the system is drained, this allows air in to get rid of the vacuum that will form within the pipes, which might collapse them (or create a siphon effect and drain the sprinkler system's water back into the public water system.) If I'm correct in thinking that this is a vbreaker for the sprinkler system, I'm going to guess that when you shut the system off, the pipe connecting the vbreaker to the sprinkler system was already frozen. Even if your shutoff valve was in good working order, the loss of the vbreaker would have prevented the system from draining quickly.

At any rate, I'd suggest replacing the shutoff gate valve with a ball valve, and fixing up this vbreaker. I'm not a professional plumber, but that's my $0.02.

Not the answer you're looking for? Browse other questions tagged plumbing pipe ice or ask your own question.

0
How to shut off water valve to outside faucet?
3
How can I tell where water is leaking from?
3
How can I isolate an indoor water pipe to prevent freezing?
3
What is this pipe coming up out of our driveway?
2
Why might my water (hot and cold) be discolored/brown
2
Concerns about a pipe that keeps freezing
0
Water hammer for all faucets
4
Inserting a Tee In 1" Pipe for an Air Compressor?
0
Correcting Navien Tankless Hot Water Heater Installation