What can I fill a trench around my house with to avoid creating a drainage issue?

I am planning out my footing insulation job. Right now it's a pretty standard floating slab-on-grade with footings extending down a few feet, and the footings are uninsulated. A ring of concrete was, at some later point, poured around the original slab to ring the house with a walkway type thing. It's annoying me because it let termites enter the house unseen at some point. A "snow test" revealed that the house leaks a lot of energy from the original slab through the external one. So it's going to be history!

Here's a cross-section of the current state of affairs: 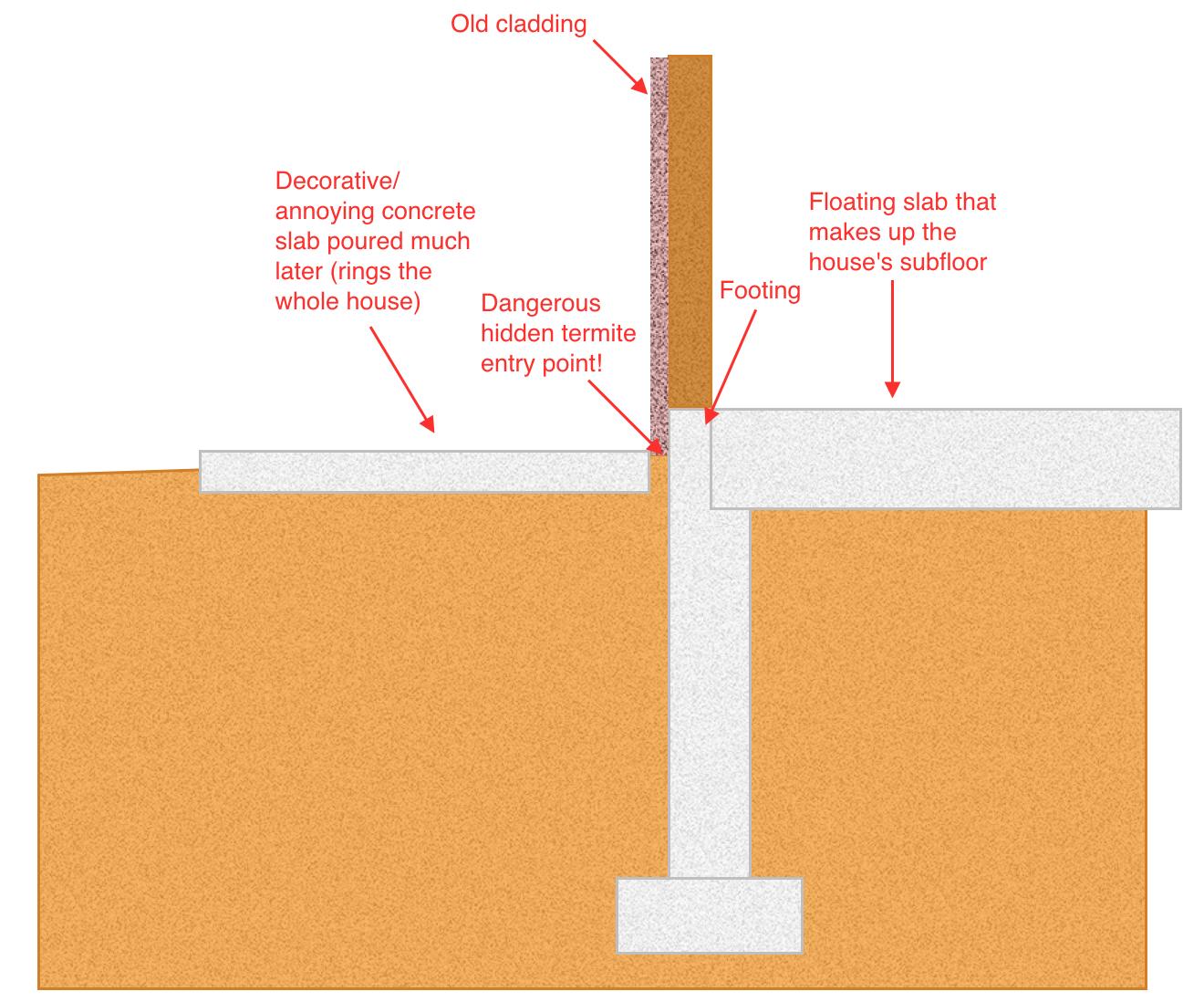 My plan is to remove the exterior concrete and dig a trench around the house to expose the footings. Then I'll attach 6" of EPS insulation foam boards right up against it, and metal flashing for drainage and termite control/tube visibility will be attached over that: 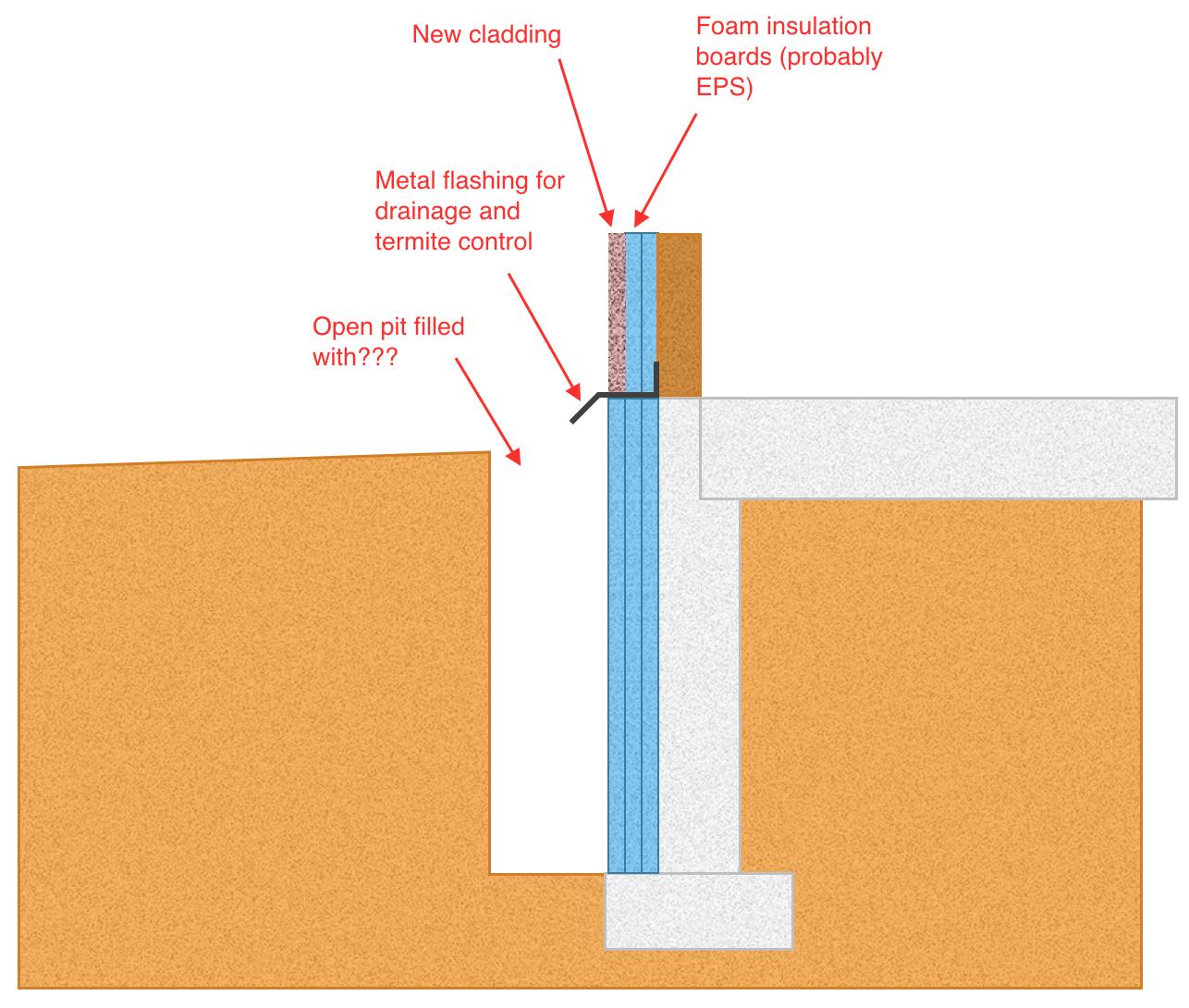 This leaves the question of what to do about the trench. I don't want to create any drainage or water control issues as a part of this project, because right now the house has none. I assume that simply filling it back in with dirt would be safe, but I want to fill it with other things instead, for the following reasons:

I should mention that this house is in the Albuquerque, NM area and receives less than 12" of rain a year. So this isn't as important as if the house were in Seattle, but I still want to get it right.

P.S. I know that EPS foam is white, not blue, but white didn't look right in the diagram!

Below grade you should not be using EPS foam - that should be XPS (pink or blue, normally) - above grade EPS is fine. EPS is not waterproof, XPS is. You can also increase your subgrade insulation a bit by setting a sheet (or portion of a sheet) going flat or angled slightly downwards away from the house at the top of the footing. 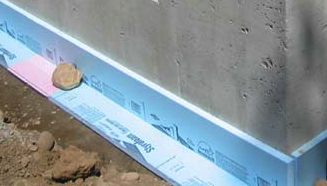 If drainage is a concern (or even if it's not much of one) and you have the trench around the house dug, dig a trench away from the house to a lower point and place drainage tile (not usually actual tile these days - 3-4" perforated plastic pipe - the holes go down) around the footing and out to the lower point, and you'll have a solid drainage system in place. It's one of those things that should be done before the foundation is backfilled in the first place, as there will never be a cheaper time to do it, but rarely is. If filling with 16 grit sand, place filter fabric over the pipe to help keep the sand in place. Filter fabric is a good idea in general, but kind of critical with a sand fill. Pipe is already buried below the insulation, beside the footing, in the picture.

Unless it's going to be noticed by the authorities and cause you hassle for "illegally diverting rain water" (evidently happens in some areas) you might want to drain your foundation drains (and gutters, if any - otherwise it will mostly end up in the foundation drains) to a big buried tank (cistern) so you can use any water collected during the rest of the year, and only drain away the overflow, if any.

Filling back in with dirt is fine, and maintains where the frost line currently is and doesn't affect drainage. you can then top it with a decorative soil of you choosing.

It is also much cheaper as you can reuse the dirt that you had to shovel out when digging the trench. (that will be a lot of dirt)

Not the answer you're looking for? Browse other questions tagged insulation drainage footings termite or ask your own question.

1
How to insulate slab that's been extended?
5
What to do first in a house with poor thermal performance and high energy bills
3
What's the right approach for insulating the slab & footings underneath a masonry fireplace/heater?
2
what is the right drainage system around a floating crawlspace foundation?
0
How can I fasten 6" XPS tight against concrete slab?
0
How to frame and insulate a "cold" room
4
Cost effective insulation for a 100 year old home?
3
How to drain grey water in clay ground in safe and secured manner