Why is water from the dispenser slow after replacing the water filter on my refrigerator?

At one of our rental properties, we have a GE GSH25JFXN WW Refrigerator. Our tenant changed out the water filter because of the recommended time to change it. He said that before he changed the filter there was good water flow at the water dispenser. After changing the filter, water flow at the dispenser was slow. Here's his e-mail before I went out there yesterday

"Thanks for the email. I changed out the filter because it had been on for longer than 6 months. When I took the old filter off, that's when I noticed there might be a potential leak (where the filter is attached). I installed the new filter and the water would barely come out. I've changed out the filter before and never had this issue. I gave the reservoir time to fill and I also held down the water dispensing mechanism for 5 minutes (at the request of GE customer service to make sure any air was pushed out of the tubing). Was still slow coming out. GE recommended trying another filter in case the one I got was defective. I bought the official GE MWF water filter each time and am still having the same problem. My rough estimation is that it's taking 7 seconds to fill about 1 ounce."

Here's a picture of the point of connection for the water dispenser. Also when you take out the water filter, it kind of leaks at the connection and it stops when I press on a little white button on the right. 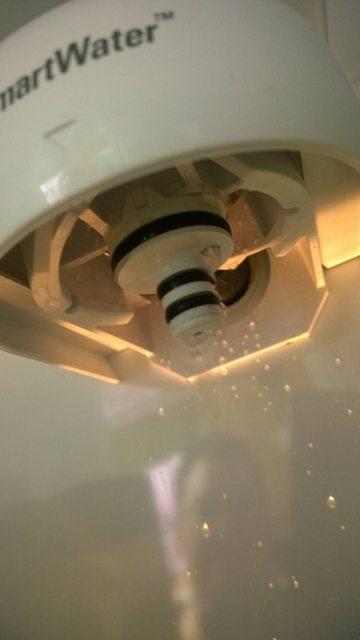 I went there yesterday to try some things:

So I noticed that he turned off the icemaker. I asked him to turn on the icemaker to see if any ice were to be made. This was around 5:30pm yesterday. I followed up with them today (12 noon) and he said the following:

"Just looked actually. Ice was made but not very much at all. The ice was also thin and even hollow in some spots so it's not getting very much water to make the ice."

I wanted to see if it's the main water supply to refrigerator or something that is just affecting just the water dispenser. I have attached pictures of the water filters for reference. There is a slight difference in the both of them. The old one is on the right. 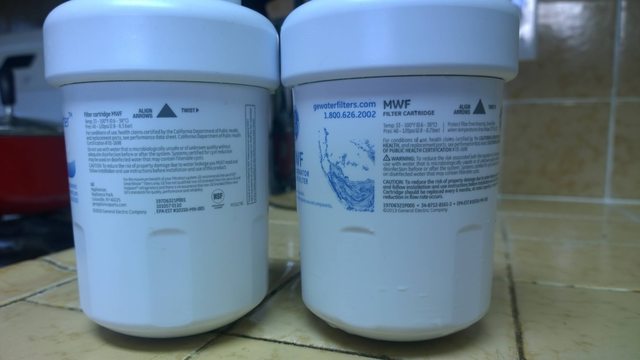 Yes, air will have that effect.

Other things to consider... If there is a valve that feeds the fridge, make sure it is all the way open (even if there is no need to shut it off to change the filtrr... The tenant may have done so and then not turned it all the way back on).

Also, for my fridge at least, not all filters are the same. The whiz bang filter model that includes carbon flows much more slowly than the cheap filter.

Last, I've never seen a fridge with its own water pump. They just use line pressure, hence my advice to make sure all feed valves are all the way open.

I've just ran into the exact same issue with our GE water dispenser. I'm suspecting the water pump since the water pressure at the filter hookup is good. It will fill a bit, then pump a bit out and then slow down to a crawl. Every other time I've replaced the filter, the water shot out like crazy.

When I had the same issue I just bypassed the filter by connecting the water source directly to the water inlet.

This showed me that there was an issue somewhere between the water filter and the water inlet.

The problem is the filter. After years of experiencing slow water (directly after changing filter) I took the filter out and inserted the bypass. Now a glass that took 3 mins to fill takes 3 seconds. I read somewhere that the problem can be solved by putting a dime sized washer over the head will also fix it. Apparently the filter is obstructing the water flow.

Well I took a look at the new filter and it had an o-ring in side the filter, and I took this out, re-installed the filter and water flows like it did when new. So it appears the filter have evolved. I figured since the valve already had two O-rings I would be safe. Water flow good and no leaks

scottscott
1
1
Add a comment  |
Highly active question. Earn 10 reputation (not counting the association bonus) in order to answer this question. The reputation requirement helps protect this question from spam and non-answer activity.

Not the answer you're looking for? Browse other questions tagged appliances refrigerator water-filtration or ask your own question.

2
What can I do about slow running water in my Whirlpool refrigerator?