What to do about different rooms in the house being a completely different temperature?

I moved into a 30 year old home last December. There is a problem with the HVAC.

I have included a very crude drawing of the floor plan 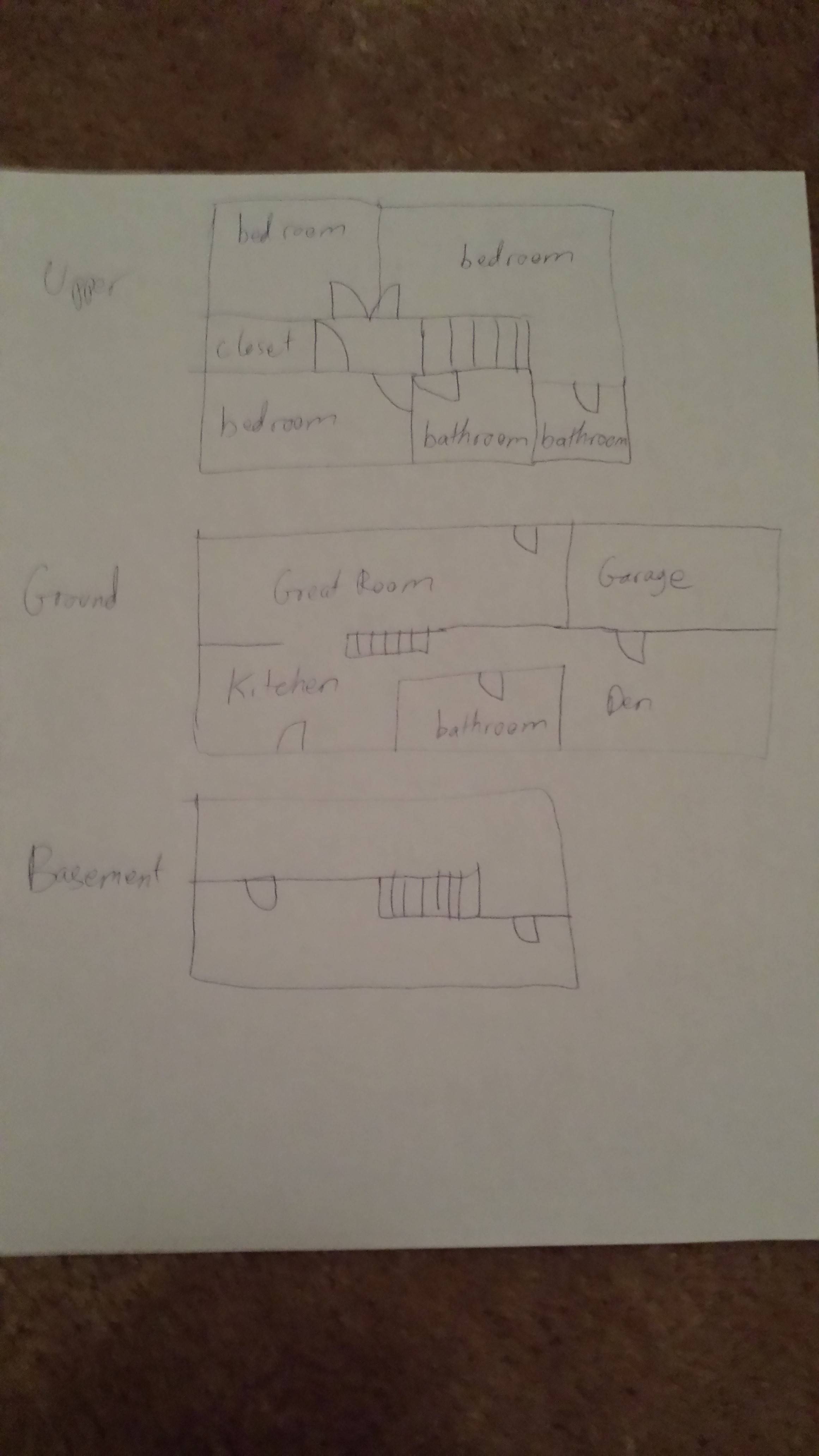 The problem is that I can't maintain a comfortable temperature in the different rooms of the house. I don't really care about the basement because I seldom use it. The thermostat is located in the great room. It is not in direct sunlight.

Suppose for the sake of discussion that I want the temperature to be 70 degrees.

It gets late at night and the bedrooms upstairs are too hot, so I turn the thermostat down to 65 to compensate. The air-conditioner kicks on and the temperature in the bedrooms is now about 70 (which is what I wanted), but it gets very cold downstairs.

When it is warm outside, I still have the problem that it is much warmer upstairs than downstairs.

It's a balancing problem, fairly typical for a one-zone heating system spanning an entire house.

Mind you, I'm a bit concerned with a setup that kicks on the A/C in heating season - being from a primarily heating climate, we typically have a "winter/summer" or "heating/off/cooling" mode switch either on the system/boiler/furnace or on the thermostat to prevent that sort of foolishness. If it's REALLY so hot in winter or cold in in summer that we want to change the mode, WE choose to change the mode, rather than leaving it up to a machine to decide.

Presumably you have forced air heat, since the same system is cooling. One approach to improve balance is to run the fan more to distribute air around the house and balance temperatures even when heat is not being delivered. A more basic step is adjusting the airflow to different parts of the system for heat delivery that more closely keeps things even - but if the same system is cooling this may be difficult to get balanced in a manner that works well for both, since heat rises and cold air sinks, left to itself.

The system may be oversized (so it quickly heats or cools the location of the thermostat, and then shuts off the fan, rather than running a large percentage of the time when it's cold out), but all systems are prone to being somewhat oversized much of the year in order to be large enough to heat on the coldest days and cool on the warmest days.

A good HVAC professional may well be worth talking to in order to tune your system as best it can be tuned. Moving to continuous circulation (perhaps at a lower fan speed) seems like it might be needed in this house to reduce stratification, at a guess. The only major downside if your system is not too noisy will be the electric bill for running the fan.

As a quick stopgap, examine your thermostat to see if it has a "fan" switch, typically with two positions - Auto (blows only to heat/cool) and "on" or "Continuous" - if the switch exists and is wired correctly, that should put the fan in continuous circulation mode - but you may want to alter the system to make that quieter and/or more efficient with a lower speed or even an entirely different fan/blower. And it may still need to be balanced to work better.

If you only have a single thermostat / HVAC zone it will be difficult to maintain a precisely uniform temperature across many rooms, but it sounds like your system needs to be balanced.

Balancing is the process of adjusting dampers and valves so that the rooms heat and cool evenly. An unbalanced room will blow too much cold (or hot) air into one room and not enough in another.

Since you mention AC I assume you have forced air heat and central air, in which case the balancing process involves adjusting dampers at each register and/or in the ducts. You can hire a company to do it, or buy 5 or 10 thermometers and do it yourself.

You also need to make sure that air is circulating properly throughout the house. There should be at least one large "return" vent that collects air to return to the HVAC. When the system is on you can hold a piece of paper up to a vent to see which direction the air is going (your hand is surprisingly bad at telling airflow direction). There may be one return register per floor, or possibly even one in every room. In any event, you need to make sure not only that the conditioned air is reaching each room but that it can get back to the HVAC unit. Closing doors makes this worse, obviously.

You may need to know where your incoming and return vents are located. In my house both incoming and return vents are located on the walls but near floor level. So for a/c, the cold air comes out the registers and before it has a chance to rise and cool the the floor it is returned for another pass. If my system was inefficient maybe the cool air would fill enough of the floor, but it is ironically so efficient that it massively pulls the cool air back down to the basement where the air handler is and recools the air leaving the basement cold while the main level stays warm.

I have added an addition return vent at the ceiling level, but this has not improved things that much. Humidity has been reduced, but not temperature. I think I will try to block some return vents, thereby making my system more inefficient and hope that that causes the cool air to stay on the main floor a little longer before being sucked back into the basement.

Check the balancing damper in the basement, or the damper at the register in the room in question... if it is all the way open, close it, if another of them is closed, consider opening it....

Not the answer you're looking for? Browse other questions tagged hvac heating air-conditioning central-heating central-air or ask your own question.

4
Is it cost effective to close some heating vents?
1
Why is one bedroom colder than the rest of the house?
0
Bedroom 10 degrees colder than rest of floor!
2
Help with oversized furnace causing short cycle
1
Why do my rooms heat to different temperatures?
0
Upstairs Story Not Cooling Despite Working AC?
3
Thermostat settings two hvac units older house
0
Equalizing upstairs and downstairs temperatures when A/C is on