How can I meet the height requirements for a door in a basement with a low ceiling?

To meet code we need a minimum 6'6" clearance through all doors. The ceiling height in most of the basement is 6'8", but the clearance through the exterior door is much less than that. On the inside of the door is a concrete step - we could remove that, giving enough ceiling height up to the door threshold, but then the door opening would still not be high enough, and also the step up would be over 8". One option we've been considering is to somehow raise the ceiling just around the door, then raise the door lintel. We'd need to raise it 4 - 5 inches. The ceiling is popcorn with a 2 x 10 joist above. We don't want to lower the ground outside the door to create a well, as it's the only path from the front to the back of the house and it's narrow, so having a big well in it would be a real pain.

Any clever ideas? Anyone done this kind of 'raising the ceiling' framing or know of a link to pictures of someone doing it?

Ask your Local Authority Having Jurisdiction -- eg, your town's building inspector. You may have a grandfathered situation. Or, if this door is not considered an essential exit from a living space (if it's an unfinished basement, for example, or if sufficient other exits exist), the headroom requirement may not apply -- you may be able to argue that requirements are already met and this opening does not have to comply and get a written variance. It's really going to be a question of the inspector's judgement.

You could double up the joists or add a double LVL just beyond the swing of the door on one or both sides if necessary, then set a double header to allow a smaller framing material to span the space that is over the door. It is a lot of work, but it appears to be the only option.... This will limit the opening capacity, with a structural engineers help, it could be expanded upon. Using an engineer is the only way this should be designed anyways, since this is not your typical situation. 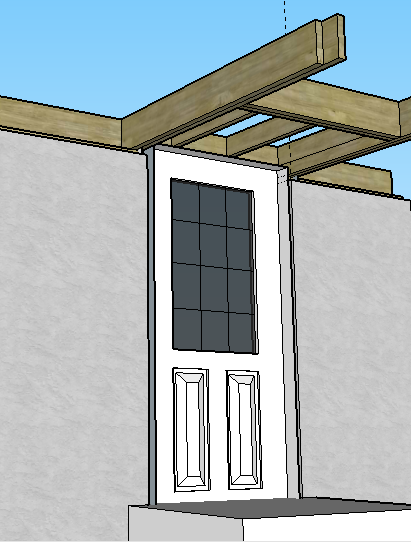 Not the answer you're looking for? Browse other questions tagged basement ceiling framing egress or ask your own question.

7
How should I build a raised subfloor for my basement bathroom?
3
Can i leave existing drywall alone when adding two small walls to a finished basement?
5
Supporting a fan in second (fake) ceiling
4
Header requirements for basement egress window
1
Basement framing low pipe ceiling
0
Framing basement ceiling with concrete slab
1
Flooring Options for Basement with Uneven Concrete Slab
2
How do I meet the 7 foot ceiling requirements in my basement when the bottom of my joists are only 81 inches above the floor (3 inches too much)?