Found hole with water under house

Today, while in the crawl space under the house, I found a large hole that has water in it. Now I'm trying to figure out what to do about it.

I had noticed a depressed area under the house in the past, possibly starting four or five years ago. Since I rarely go under the house, I didn't pay much attention to it; but, over the last year I'd noticed it was larger.

Today, I thought I would fill it in with some old concrete block pieces. That's when I realized how big a hole it is. It's about 4' wide. And, it about 3' deep.

I hooked up a light and took a picture (below) and discovered that there are spiral steel/iron rings in the hole. The rings appear to be three or four feet in diameter. The water is cloudy, but there's no smell. And, there is no perceptible movement of the water. The photo doesn't show the water; but, it's maybe 3' deep.

I think this must have been a drainage pipe built before our subdivision was constructed in the 1980's.

Anyway, it's clear that about 3 cubic feet of soil has washed away so far. So, I have to do something.

Should I phone the local county storm drainage folks and ask them to check it out? Or, is this a problem I'll need to hire a contractor for? If so, what type of contractor?

Will appreciate advice from someone with knowledge of this type of problem. 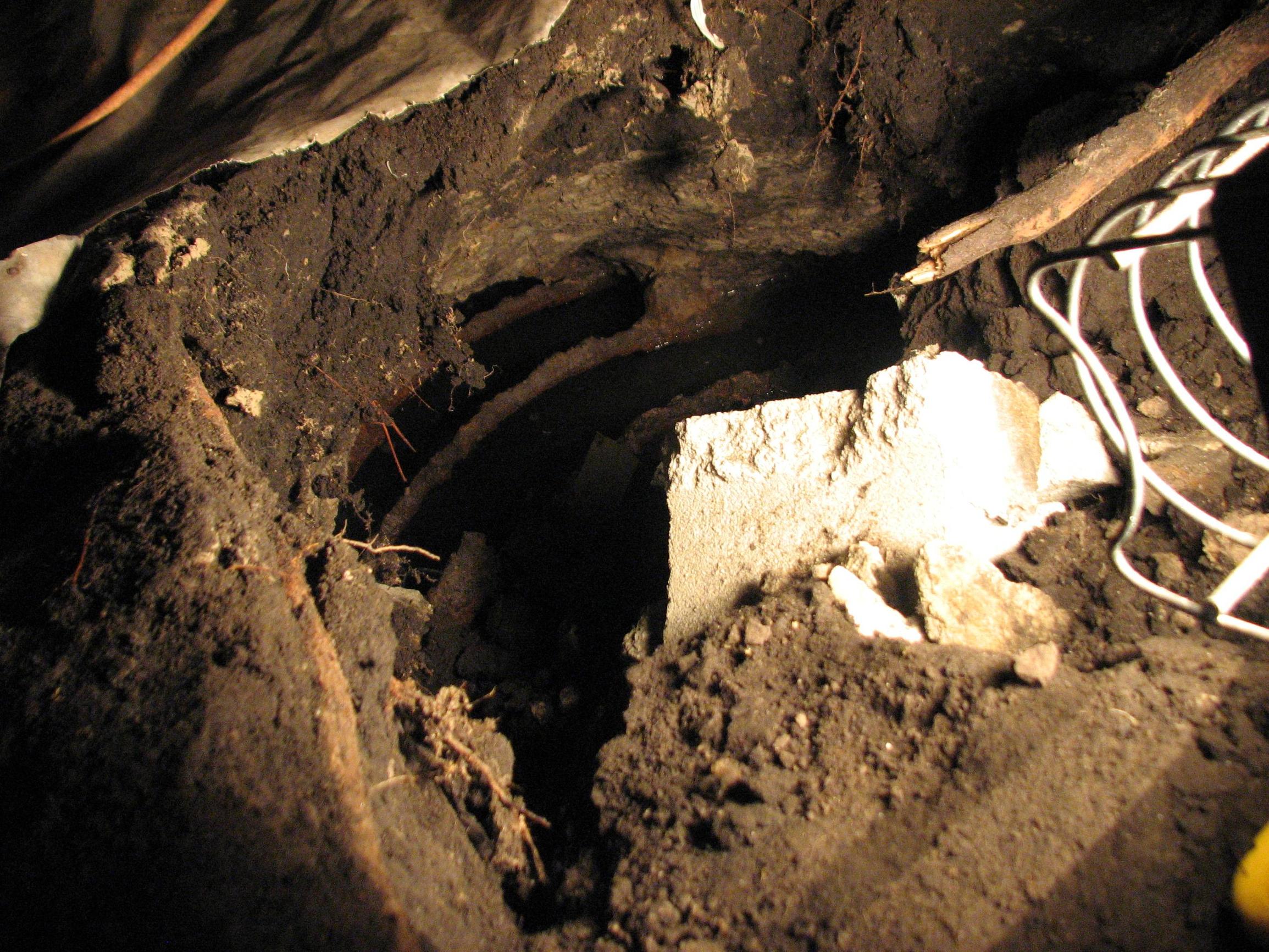 Update 4/24/14: Received sump pump today and used it to pump out a lot of water: my guess is about 90 gallons. And, not done yet. Further, while running the water hose for the pump over to a vent another hole appeared. It's smaller, but right next to a pier. And, shining a light down in this hole, similar spiral metal coils with water below were visible. The spirals rings are on line with those in the first hole, about 15 feet away.

What I'm planning on doing is: keep pumping the water out of the first hole; move pump to second hole and repeat; dig outside the crawlspace and try to locate the water tunnel and pump it dry there too. After all water is removed, wait a few weeks to see if water returns, and from which direction. Finally, after stopping the source of the water, fill the complete tunnel with dirt. But, if anyone has any better ideas I'm flexible.

Wow! What a surprise. I don't think it's related to any county storm drainage system. Wouldn't hurt to contact them though. My best guess is someone acquired some spiral reinforcing somewhere and used it to construct a dry sump for some purpose. It was then forgotten until the cover collapsed and you noticed something amiss. The water probably means you have a shallow water table.

If my assumptions are correct, you just need to fill it in. If there is no nearby foundation structure, you just need some manual labor to haul in fill material. If it is near a foundation, at least some of the fill may need to be compacted. Depending on access, this can be difficult. You could probably hire any general contractor willing to take on the job.

Your description of the "reinforced hole" matches that of an old well or cistern, perhaps from when the land was agricultural anywhere from the late 1930s through the 1970s.

To confirm, ask your local land use bureau, historical society, or equivalent who can produce survey maps from the mid 20th century—or any time before your house was built. Topographic and survey maps usually show wellheads and building structures if they are prominent enough.

If they do indeed confirm a well or cistern, then simply filling it in is almost certainly good enough. If the map shows a spring, you might want to install a liner and a drainage system.

If you have a sump it is probably there for a reason - if you fill it in, then the water that is in it will instead be all over the floor of your currently dry basement. Get someone who knows about basement drainage to take a look. It's very common in Canada to have a sump in the basement, usually with a pump, hooked up to the storm drain. Google basement sump.

That hole is a sump. Install a sump pump in it and pump the water out from house.

Not the answer you're looking for? Browse other questions tagged crawlspace or ask your own question.

5
Curtain drain in the crawl space - Part 3
5
Sump with no pump!
3
Crawlspace Drainage
0
Do I need to install a sump pump?
1
Sealing crawl space vents in Pacific Northwest?
1
How can I effectively drain foundation water along the sump pail location?
1
How low should I drill holes in my sump pump basin? Should I drill them at the bottom?
1
HVAC Condensate draining into crawlspace
1
Fix Hole in Foundation