What would cause excess CO2 in cellar

Question Update: We now know that the problem is Carbon Dioxide; any suggestions on what could be consuming oxygen and producing Carbon Dioxide would be great!

We rent an old farm house that has recently been renovated, the cellar has been tanked, it would be perfect as an office, but I'm out of breath just typing this question.

It seems that either a build up of some other gas is excluding the oxygen. Does anyone have any ideas? It doesn't seem normal!!

I'm guessing it's oxygen (or lack of) as I'm unable to even light a match in the cellar.

It does seem to be worse when it's wet weather.

There is NO obvious source of gasses, as the house has electric heating, cooking and hot water

We've had the Environment Health monitoring the Cellar and the rest of the house for some weeks now. They have now served a prohibition order preventing us from using the cellar. They recorded levels approaching 10%, today we have had a surveyor at the house appointed by the landlord and they initially speculate the source could be soot used in the foundations. Any thoughts?

An insepector from the local council has installed a data-logger, whilst he was in the basement he took a reading that I've attached below. When this reading was taken the air felt poor, but by no means the worst it's been, a candle wouldn't stay alight. An breathing during conversation seemed laboured. It looks like the assumption of displacement doesn't look correct, there's more to it. Here's the readings: 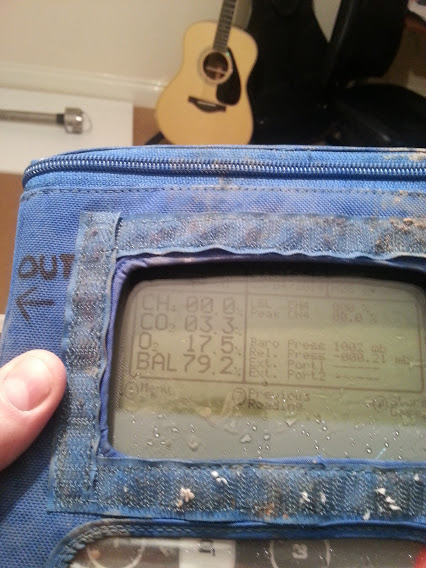 If you're feeling lightheaded/out of breath in the basement, I'd stay out of there until it's well ventilated and never enter the area without someone on the outside to monitor you and call for help if needed (but that person should not enter the area). If it were my basement, I'd call the fire department to check for Carbon Monoxide and/or combustible gas and assist with ventilation.

One possibility is that Carbon Monoxide has accumulated in the basement, perhaps due to a faulty heating appliance and poor ventilation, or gasoline powered equipment in or near the house. This is extremely hazardous and potentially fatal -- it can cause you to become incapacitated and unable to leave the space.

Some signs of CO exposure include:

A rapid or irregular heartbeat

Another, less likely possibility is Carbon Dioxide (CO2). CO2 is heavier than air and can pool in low areas such as unventilated basements. It would take a fairly high concentration of CO2 to prevent a match from igniting. It is less dangerous than CO in that the CO2 doesn't bind to your blood like CO, but overexposure to CO2 can incapacitate you, preventing you from leaving the area.

CO2 can be generated by a combustion appliance like a natural gas or propane fueled dryer or heater with a faulty exhaust vent. Other sources could be something that uses CO2 gas directly like gas from MIG welder, home brewing equipment, home water carbonator, etc.

You could have a natural gas/propane leak. I'd avoid any open flame or anything else that serve as an ignition source (wuch as turning on a switch or even a flashlight) just in case the problem is caused by a combustable gas. Propane is also heavier than air and can pool in lower areas (Natural gas is lighter than air and tends to dissipate, except when the gas is cooler than air and more dense, so it can pool). It is possible for the odorant used in natural gas and propane to fade, so lack of distinctive gas odor doesn't necessarily mean that no gas is present.

A bit of Environmental Health & Safety perspective: Normal air has 21% oxygen, and anything below 19.5% is considered IDLH ("Immediately Dangerous to Life or Health"). The real danger is not that you would immediately pass out, but rather that your thinking is impaired and you may not be capable of removing yourself from the area. A match will burn well below 19%, probably down to 15% or less, so it cannot be used to judge your safety.

There are a number of possibilities. The air may be unusually high in carbon dioxide (unusual) or nitrogen (even more unusual), presenting no more than the usual asphyxiation danger. It may be high in carbon monoxide, in which case it is far more dangerous, being able to actively strip oxygen from the hemoglobin in your blood. (In extreme cases there can be so much CO compared to O2 that the effective oxygen concentration is negative.) Finally, there might be a combustible gas like methane (CH4) and hydrogen sulfide (H2S). In that case you have an explosion hazard in addition to asphyxiation.

There are three possible cases for combustible gases. First, there may be trace amounts, below the LEL. In that case the gas will not spontaneously combust and the primary danger is oxygen deficiency. Second, you may be above the LEL such that even a spark could set off an explosion. This is an extremely dangerous situation. Professionals usually leave the area and call the fire department if they are above one-tenth of the LEL because of the danger of a local buildup. Finally, the concentration could be so high (above the UEL) that the gas has displaced enough oxygen such that it can't even burn readily. In that case not only is there far too little to breathe but the surrounding area will be above the LEL and liable to explode. (Technically, deflagration is more likely than explosion but let's not quibble here.)

What can you do? First of all, take the situation seriously—unless you have metering equipment to verify oxygen levels, don't suppose they're high enough. Start by ventilating the area, and avoid sparks until the air has been exchanged at least a dozen times (20+ hours). I would let it ventilate passively for a day then take a fan to it. Second, you should get a CO meter (from your hardware store, about $30). Carbon monoxide doesn't stay around long, so if that was the problem it's likely being produced by one of your appliances (usually the furnace). Third, if you find yourself in the same situation again, leave the area immediately and leave investigation for later.

Carbon dioxide is only a possibility, you should take in account there are other various gases that could prevent the match to ignite. In fact maybe there many gases that contribute to the lack of oxygen in your cellar. You should first do a qualitative analysis before performing a quantitative analysis. Here I have wrote a little list of gasses with the related method to detect them, and the sources:

Maybe there are some spot test (methods that use chemists to have a qualitative or quantitative esteem of a specific substance) that you can do at home cheaply, but I would reccomend you to call specialized commpanies or organizations.

How about testing for Radon? High level of Radon will make you choke and it will make you feel like there is no oxygen. It can also causes lung cancer. Please check because not a lot of people are aware of this especially if you are living in an old house. Radon gas is very dangerous.

Not the answer you're looking for? Browse other questions tagged air-quality or ask your own question.

0
Should I ventilate my basement?

1
How would you vent my basement bathroom fan?
1
I just had my driveway sealed, and the fumes are making my house uninhabitable. What can I do?
1
What materials should be used to seal a square sump pit
0
What affects air quality indoors after home improvement?
7
What are the downsides of a pressurized room?
0
I need a stronger fan for this CO2 scrubber
1
Since moving into a new house we are constantly ill including both my dogs. Is this house the cause?
2
What are the options for filtering fresh air entering a building (especially outdoor air with wildfire smoke)?
0
When would you want/have/need to put in a post filter in an electrostatic air filter system?
0
Artificially lowering CO2 concentration