I got a PVC pipe cutter a year or two ago, and used it once. Now I need to use it again and I am finding it extremely difficult to get it to cut the pipe. This cutter is of the style where there is a sharp disc on the outer edge and two black rollers on the inner edge with a screw-like mechanism to move the inner edge towards the outer one; one rotates the cutter around the pipe (or vice versa) while gradually tightening the screw.

The first problem that I had (when I first used the device) was that I seemed to have to turn the screw an insane amount to get the pipe completely cut, to the point where the pipe itself is showing visible deformation (bowing). If the cut in the middle of the pipe this doesn't seem to be a problem (I'm using 3/4" schedule 40 PVC), but if I need to cut a short length of pipe (under 2-4 inches) this can damage the pipe.

The second problem I only encountered now after not using the cutter for a year or so. The problem that I am having now is that, before I have tightened the cutter enough to cut all the way through the pipe, I am seeing some kind of black mark being made on the pipe itself. Since the rollers are black I can only suspect that the force between the pipe and the roller is causing part of the roller surface to come off. Obviously I don't want a black film compromising the integrity of the bond; I have tried sanding it but it doesn't completely come off. I wound up using a pocket knife to finish cutting the pipe but that is rather sloppy and the edges requires a lot of sanding.

Is this just a crappy tool (my searches for "PVC pipe cutter" yield hardly any images similar to the type I am using, but it's what the hardware store had) or did I just get unlucky? I haven't really used it that much so I wouldn't think the problem would be the disc blade getting dull. I assume I probably need to throw away this cutter and get a new one, or is there some trick like applying oil to the roller or something?

It sounds like you're using a crappy copper pipe cutter. To cut PVC, you want one of these instead: 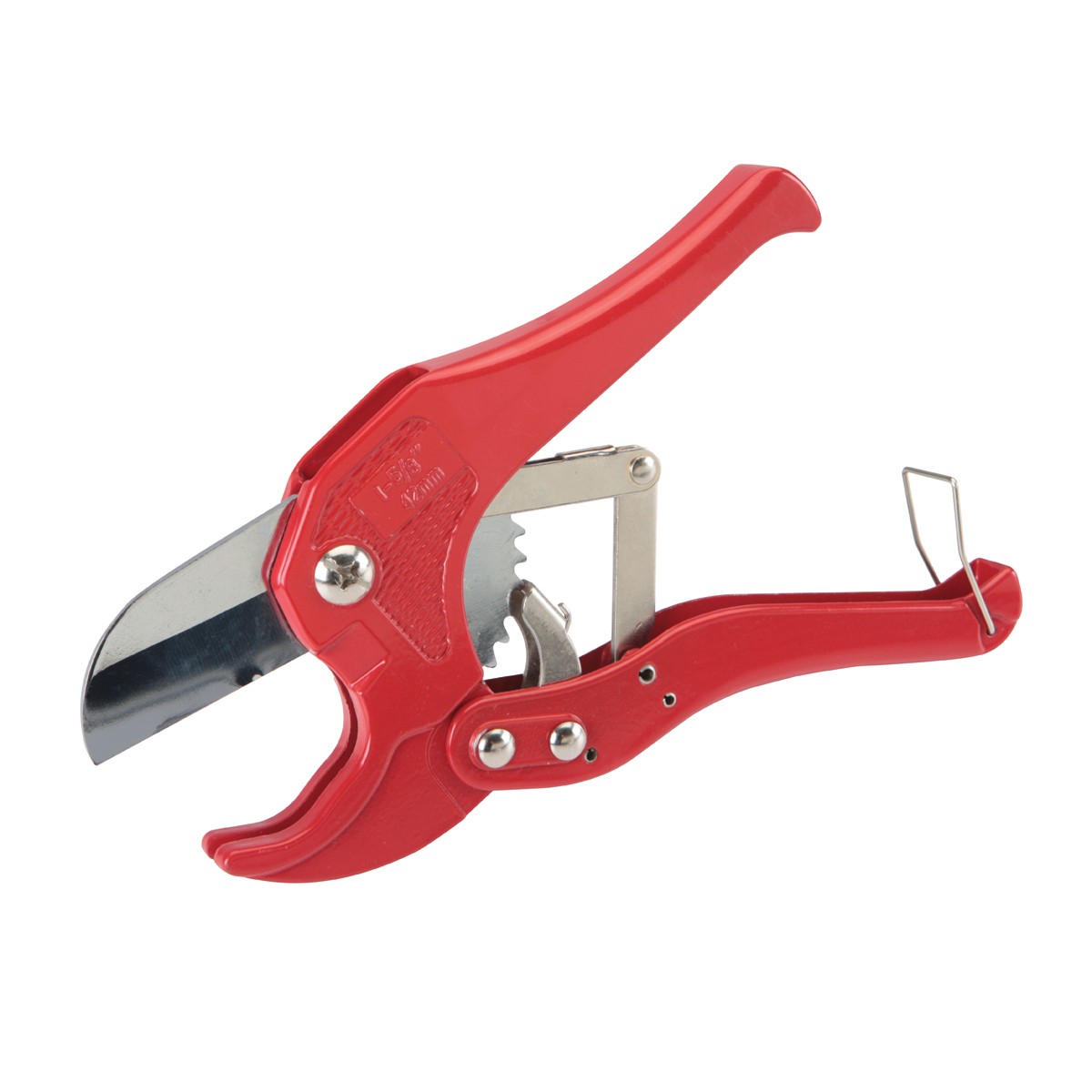 I've used mine to cut thousands of PVC pipes and it does the job quickly and easily. You can probably find one for less than $10 and it will serve you well for life.

Are you sure you're using it correctly?

If you're deforming the pipe, you're likely tightening the cutter too much at each interval. Let the blade do the work, not the clamp.

A friend of mine holds the cutter by the crank in such a way, that as he rotated the cutter around the pip, the crank advances the blade. However, I've only seen this technique used on soft copper pipes.

I think the hardware store sold you a copper (or iron - they look the same except the iron-pipe version is built a lot heavier) pipe cutter, not a PVC pipe cutter. @iLikeDirt has posted a picture of the normal PVC pipe cutter. Throwing it away is rather extreme - you may need to cut a copper pipe someday.

You should be able to remove black marks (and dirt, and grease, and printing on the pipe) with PVC pipe cleaner, which should be step one of getting a good PVC joint (cleaner, primer, and glue.)

Whatever you cut with, but especially with this type of cutter (which will deform the pipe and create a lip) you should ream the inside of the cut pipe to remove any burr and ensure full flow (on any type of pipe, not just PVC.) This is an example of a deburring tool.

You either have the wrong cutter or a bad blade. Even a new cutter could have a faulty blade. I use the attached cutter for all pvc and abs.

Not the answer you're looking for? Browse other questions tagged pvc cutting or ask your own question.

1
How can I avoid excessive junk on inside junction, when cementing PVC sprinkler pipe?
3
Techniques for Squarely Cutting the End of a PVC Pipe
2
How to fix PVC to PVC leak?
0
PVC pipe end cap fitting, with center hole and offset hole?
1
PVC Pipe for sprinkler system broken in multiple places
0
How would I connect rigid pvc to a flexible hose for a drain
0
Way to patch pinhole size hole in black pvc drain/vent pipe
3
Old PVC pipe arches / bows out of the ground