How to SLIGHTLY widen bored hole in 2x6

I'm making a stand-alone pullup bar and I bored 1 1/4" holes in 2x6's for my 1" galvanized pipe (1 1'4" outside) to slide through. Only the pipe is definitely 1 5/16" (thank you, guy at Lowes) and I can barely thread the first 1/2" of it with all my strength. I tried wrapping lots of sandpaper around my speedbore bit with a dash of 3M 77 and that slightly worked but the sandpaper wore out way too quickly to ever get me there.

Does anyone know how to uniformly sand the inside of the holes to give me my 1/16" of an inch?? I've only been able to find videos on how to go from one size bit to another, but nothing on how to make the hole you already have slightly larger. 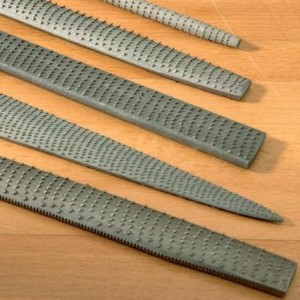 The general method I use to make a bigger hole is to take a scrap piece of plywood (1/4" works great) or pegboard or similar that is a bit bigger than the hole, clamp/screw/hold it in place, then use the correct size hole saw to drill through that and into the board. This gives enough of a start to keep the hole saw in place to drill the rest of the way through. 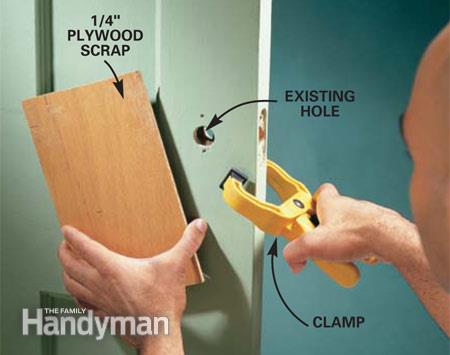 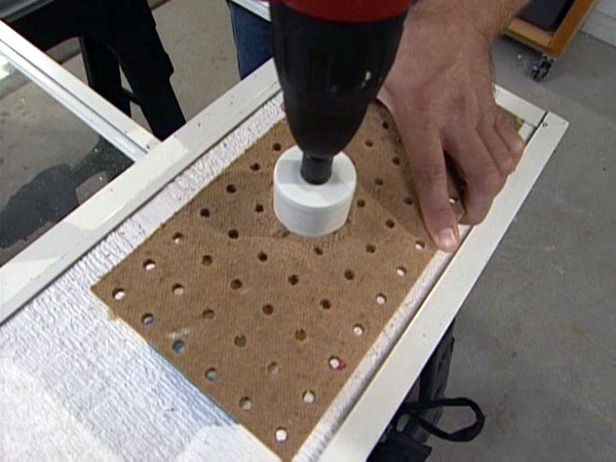 For only 1/16" of an inch, another trick is to just use a normal, large drill bit (eg 1/2") in and put it in the hole, up against the cut edge, and move it in a counter-clockwise circle. 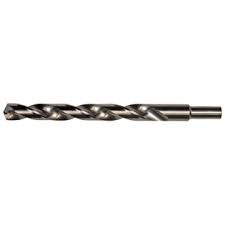 Before you start, draw a circle in pencil to give you a target to get to. The bit just needs to have a fairly large spiral and be sharp. The drill will shave away the sides of the hole.

Be careful to ensure that the drill doesn't slip or kickback and hurt you, and that you don't stay in once place too long (which will ruin the round shape of the hole). I highly recommend using a cordless variable-speed drill so you have maximum control for both safety and quality.

Thank you to everyone for your insight! I made a quick stop at the Lowes down the street and picked up a few inexpensive options you all mentioned. The one that absolutely stood out for my purposes was the drill rasp. As soon as I began I knew it was the one. 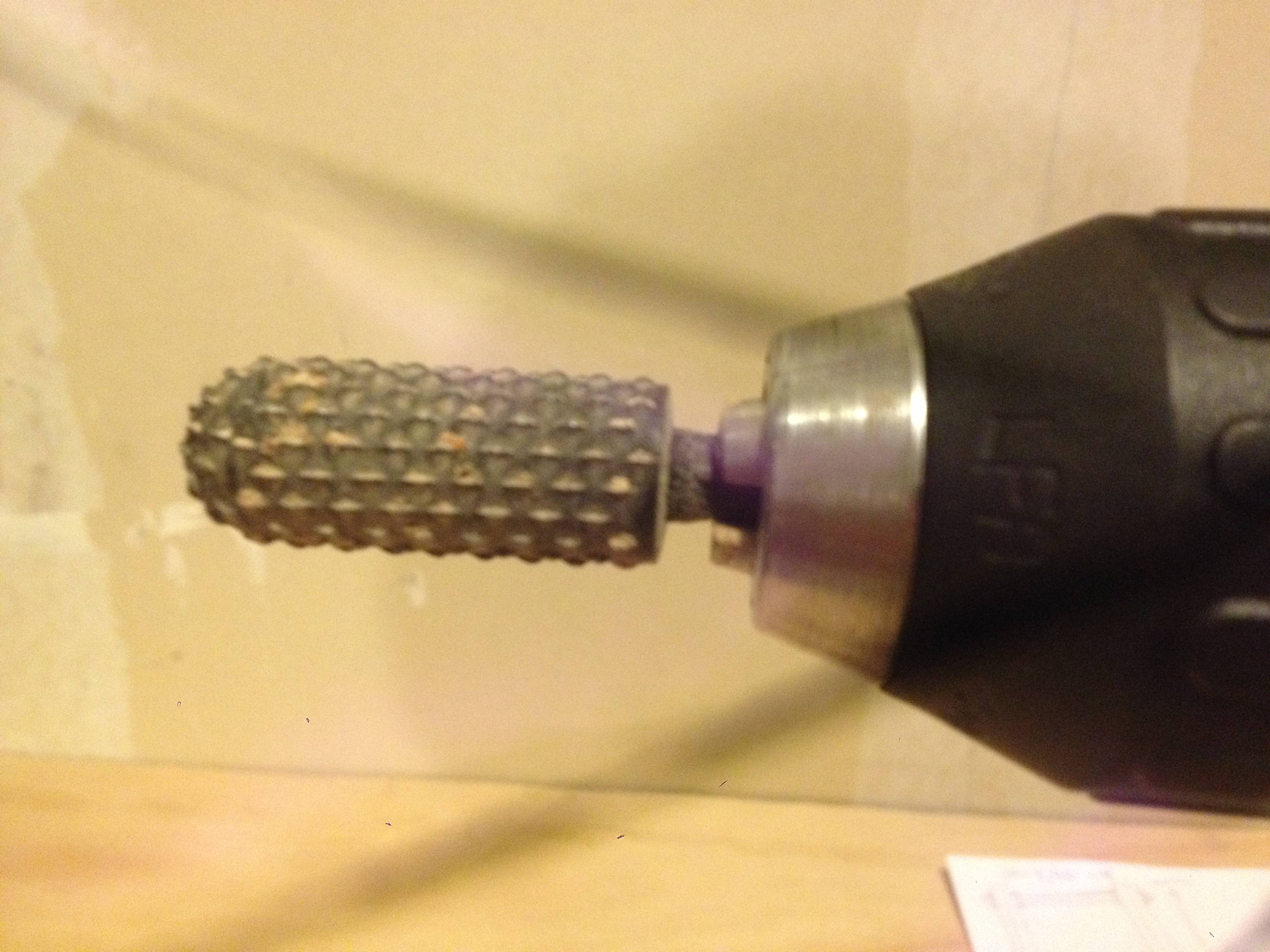 I went back over 4 holes, each taking about 1-2 minutes to effectively widen and shape. I was very happy with my level of control. 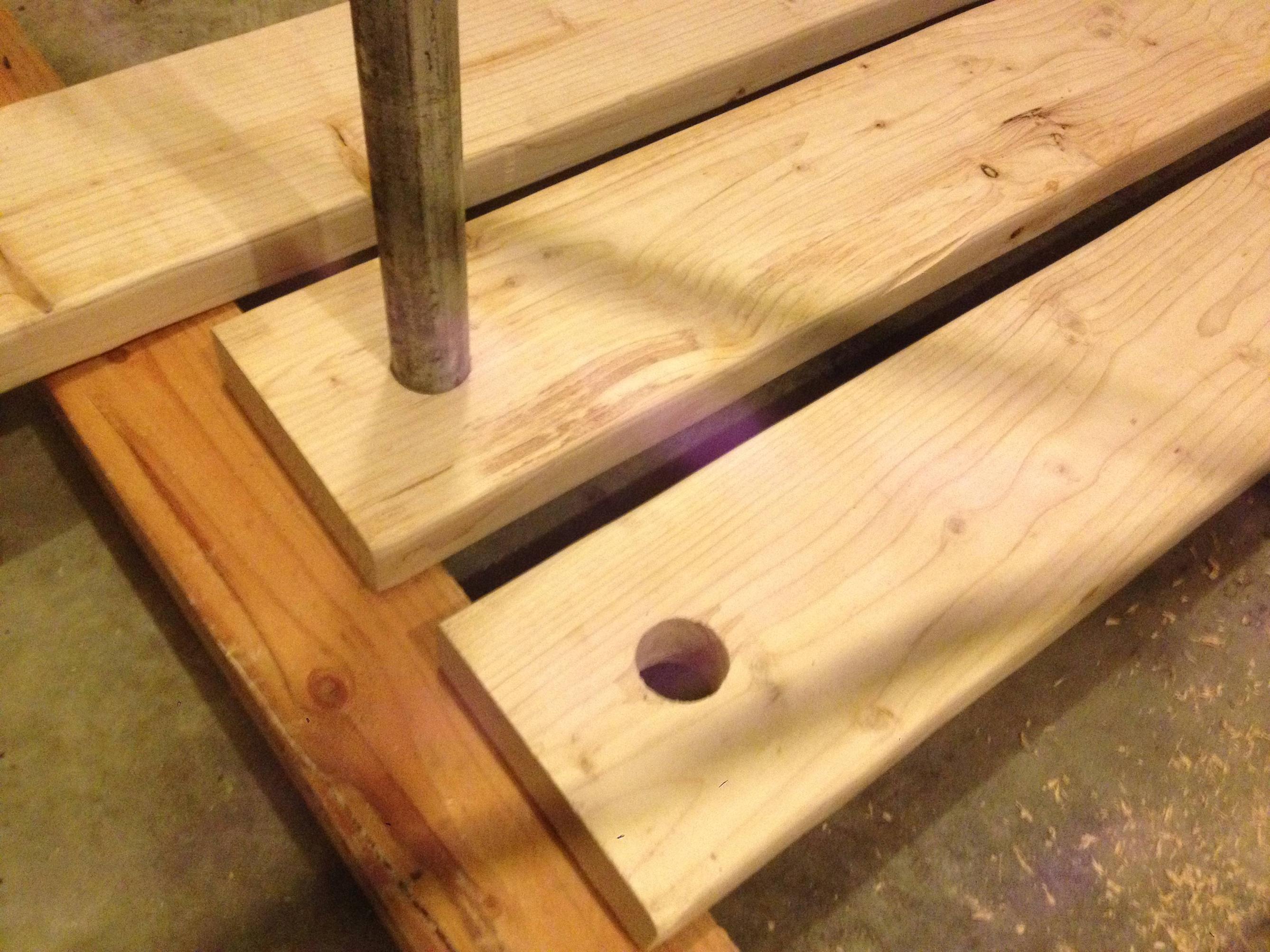 Here's the finished pull-up bar. I had to build it in some tight quarters due to some choice weather. It can be used then collapsed and slid in a tight spot. Again, thank you all for your wonderful help. This new guy got way more feedback than he was expecting! Cheers 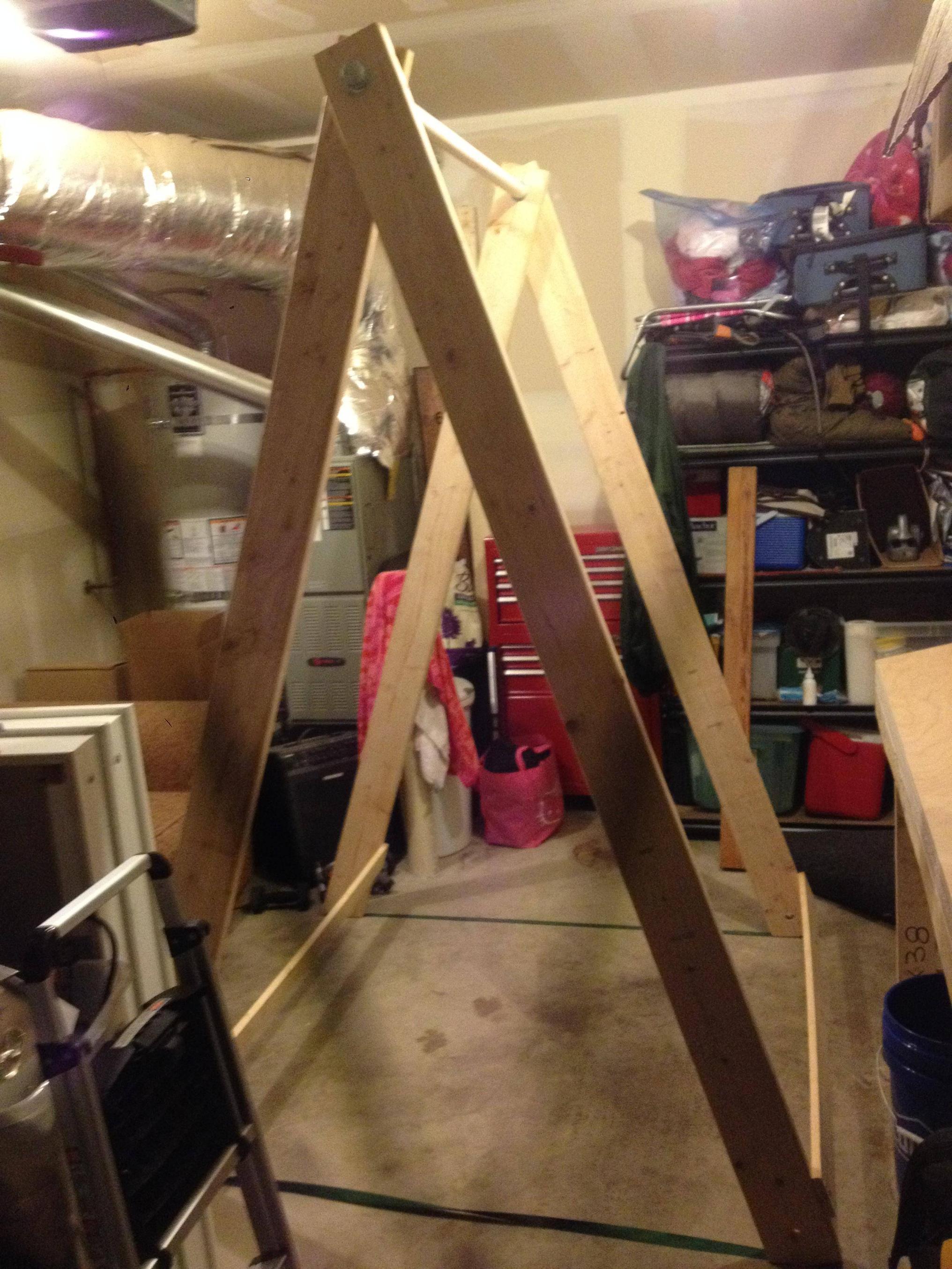 I think your best bet is to use a sanding process to open up the hole. It may take a while but should get you there eventually. When I had a similar problem I took a piece of 1/2 inch diameter birch dowel rod (about nine inches long) and cut a slot across its end. Then inserted a folded over piece of sand paper to make a two sided flap sander. Chucked into an electric drill one is able to sand the inside of the hole with ease.

Flip over the sandpaper in the slot to utilize the back side of each flap or just reverse the drill rotation direction.

You'll have to experiment a little to get the optimum size for the sandpaper piece. Its actually twice the size needed and then folded over paper side to paper side before being slid into the slot of the dowel.

Replace the paper as often as needed.

Here is a picture from on-line to give an idea of what it would look like. Sometimes using a cloth backed sandpaper can last a bit longer with this technique if you have that available. 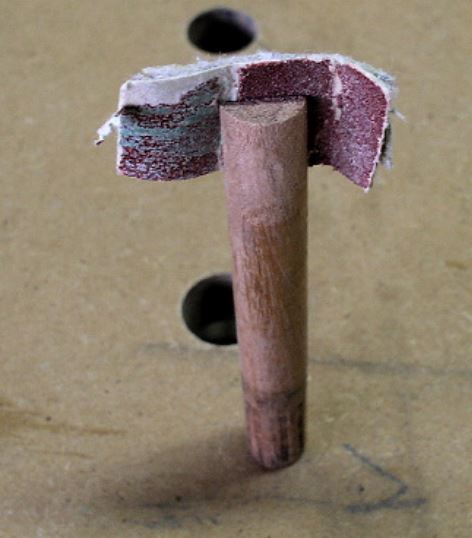 In your case I would make the slot in the dowel about 1.25 inches deep and slide the sanding piece all the way into the slot instead of hanging half way out as showing in this picture.

Three methods I can think of.

Enlarge by friction Your idea of wrapping the bit in sandpaper isn't even bad. The only "right" way to do this is a different bit, and that's not even worht it.

You just probably used the wrong sandpaper. Try some 80 grit and make sure to go in a back and forth pattern, roughly every half inch you plunge. 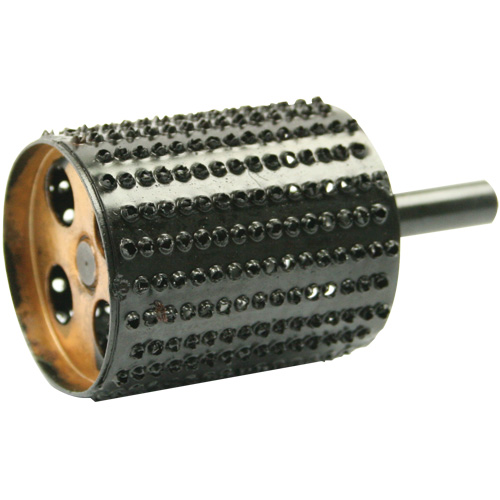 Enlarge by cutter If you REALLY want to make this PERFECT, you can use a router. Take it off once side with a 3/8 guide bushing and a 1/2" bit, then put on a 1/2" bushing and do the other side.

You could even use a tracing router bit. They have bearings and blade that'a almost identical in diameter, except the blade almost is always JUST wider than the bearing. It'll take off about 1/128th of an inch at a time, so you'll have to trace around your hole about 20 times to take off such a small bit of material. 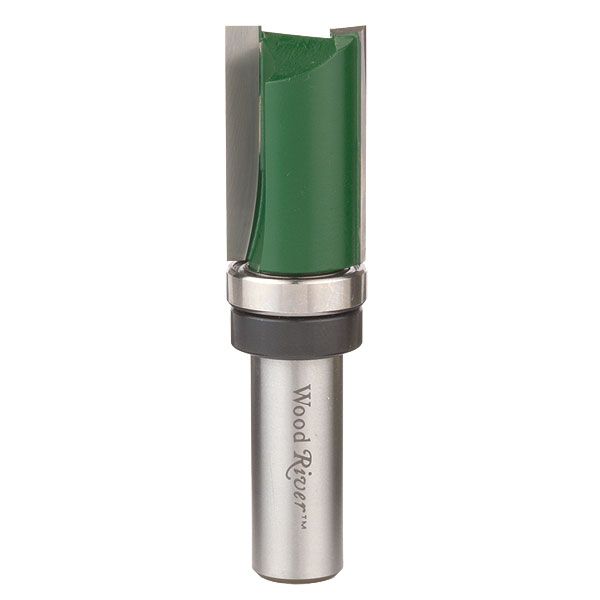 Make due by Force

Keep in mind the pipe isn't perfectly round either, and your hole can be off just a little bit as well. Even if you take off half of what you really need to, the wood will flex and look gapless against your pipe. The pipe could be bigger than you think, the hole can be smaller than you think. Tolerances on both of those are actually pretty out there.

You might even find it easier to narrow up the pipe instead. Metal doesn't gum up sandpaper as easily as wood does.

You can, after a little sanding if you please, just force it in. Put a piece of sacrificial wood on top of the hole, get a hammer, and bang the pipe in there. 1/16 is 0.0625... There's nails that are wider than that, and they can be banged in with a hammer. That's only 31 THOUSANDTHS of an inch on each side.

I am not saying that this way is the best nor is it recommended on high-end finishes but I simply would maneuver the current bit around the hole until it was bigger. You will get to 1/16" quickly with this method. To make it more effective just keep the bit perpendicular to the board at all times and don't put a ton of force on the edges. I will also put the drill in reverse half the time. I know it is hillbilly but it is easy and works for most cases.

Not the answer you're looking for? Browse other questions tagged wood woodworking drill sanding hole or ask your own question.

4
Are there any good videos available that teach basic carpentry?
0
How should I widen a picture frame?
1
How do I widen a hole in my porcelain kitchen sink?
0
Holes in drywall slightly too wide for screws
3
Could a spade bit be used to widen an existing hole in a wooden cabinet?
1
Installing pull-up bars. Will this design hold?
0
Widen a hole in an existing knife block?
3
Is it normal for drill bits to slip in a keyless chuck when binding in metal?
1
Can I widen the hole with a drill to straighten the handle?