How to properly insulate bedroom

I live in an 80-100 year old house (not sure of exact age...my great grandfather built it, and it has been passed down for a few generations). He built it out of whatever was cheap at the time, so in many of the rooms we found things like newspaper used for insulation (which was actually kind of awesome). We live in Ontario, Canada, so it can get pretty cold here.

I will soon be renovating the master bedroom. Most of the rest of the house has already been renovated, this is the last remaining original room. This room has seen some water damage from a leaking roof (since fixed), and drywall damage from age and clumsy people.

Once the weather is nicer, we plan to:

As luck would have it between my family and myself we have all the skills to do the drywall and electrical work. The part we are unsure of is what kind of insulation we need, and how to put it in. 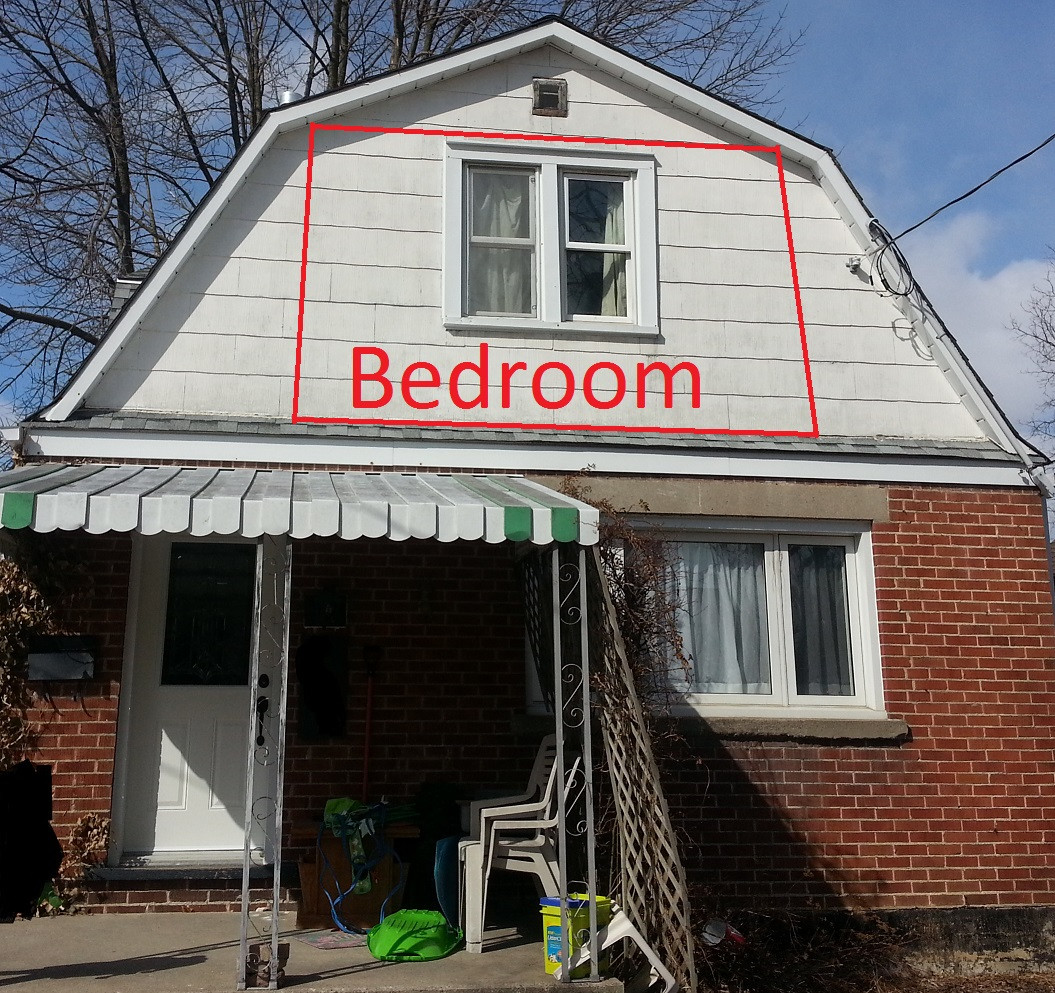 This view from outside shows where the master bedroom is. The room itself is 12' x 12'. There are attics on 2 walls and the ceiling, and one outside wall.

This room is freezing in winter! I can feel the cold practically blowing through the walls. This makes my wife unhappy, so must be fixed.

Since the drywall is broken on the outside facing wall, I can see what is already there: 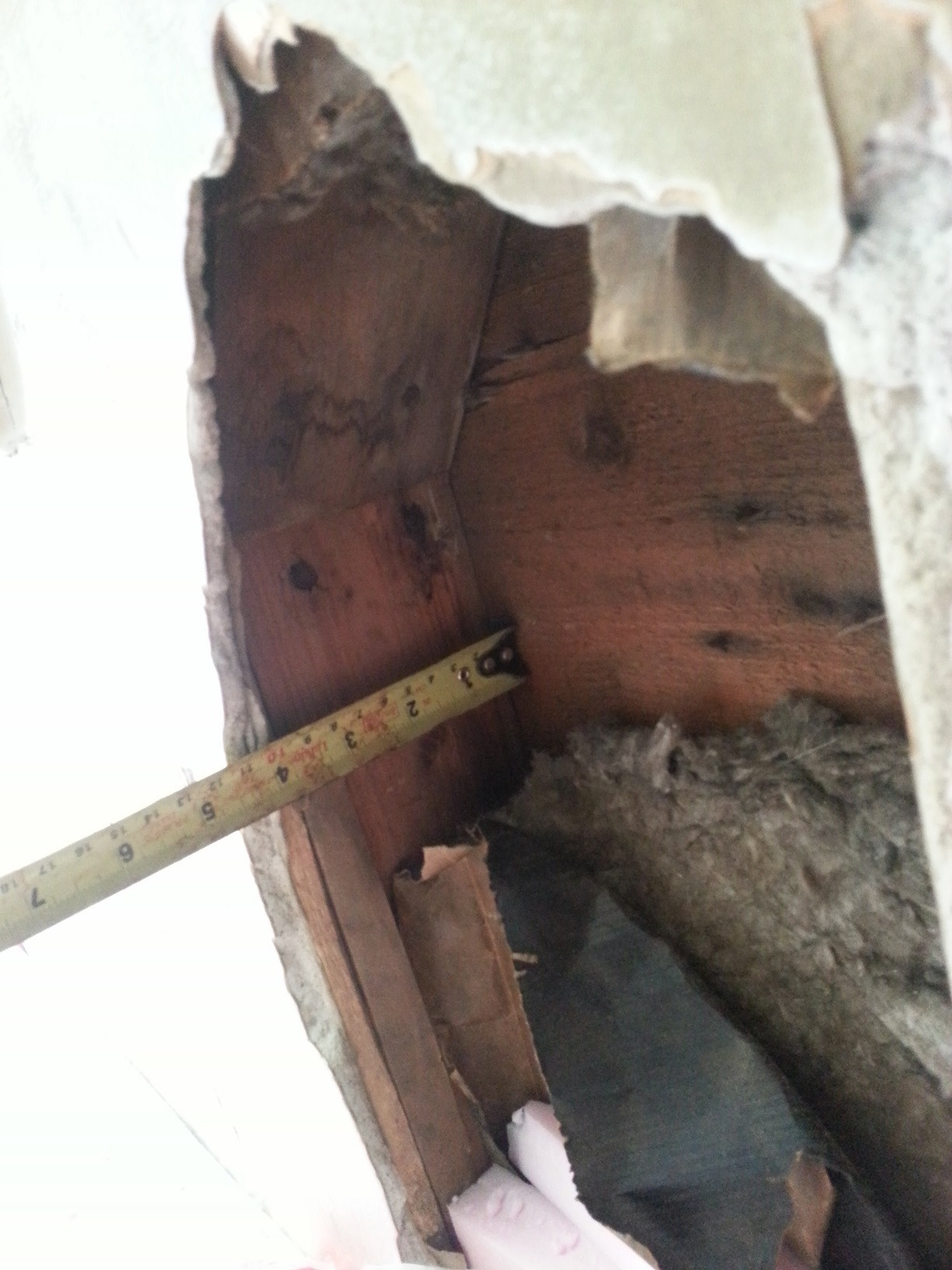 This area is probably narrower than the rest of the wall, since it is right next to a window on the left. The pink foam at the bottom is what I crammed in there temporarily and covered the hole with vapour barrier plastic.

I can access the attic to add insulation from above, or I can install it from below before drywalling the ceiling.

So, my questions are:

I grew up with vermiculite (now rare due to most of it being contaminated (in the ground) with asbestos), moved on to fiberglass, and am now a blown-cellulose convert.

They all work, for various values of "work."

Cellulose is inexpensive, gets MORE effective when cold, and blocks airflow well enough that a vapor barrier is (possibly) optional according to some researchers. It's dusty during install, but otherwise innocuous. I'd suggest getting a bale from each supplier (or each different brand from suppliers) and inspecting it - or from the supplier you'd go with on a cost basis (first) and if that fails your inspection, from others. I found the sample I got from a major home improvement chain was contaminated with a lot of scrap plastic; as it turns out, not only were the bales from my local home improvement non-chain cheaper per pound, they were also good clean cellulose with no plastic scraps.

Fiberglass compares well at 70F (where R values are measured) but gets quite terrible at -20F, just when you want it working hardest. It's far more prone to air movement (whether in batts, where seams are are a problem or as loose-fill.) Plus there's that whole scratchy thing going on with glass fibers.

According to "belt and suspenders" thinking and "it's cheap enough" my cellulose is sitting on top of a vapor barrier. One more way to stop air movement. Since your climate is primarily heating, your vapor barrier goes on the inside (generally, the "warm" side - complicated in climates where heating and cooling are similar.)

If you are not using the space beyond the wall, insulate the wall (and perhaps add some furring strips to get more insulation on the wall where there is room.) If you insulate the roof, you need to provide cold air channels against the roof surface to vent the roof appropriately (though with that steep of an edge, it might be difficult to get a serious ice dam, which is what roof venting/cold roof design is trying to prevent.)

Since you are gutting it, you may also want to furr out the endwall to make it thicker and give you more space for insulation, since you won't get a lot of R-value with any insulation in the space available. Alternately, and at higher cost, you could sandwich a layer of sheet-foam type insulation over the studs and under the drywall on that wall.

Generally you will also want at least a few cans of polyurethane spray foam. While you can do all your insulating with spray-foam, it's very expensive, relative to other kinds of insulation. But it's great for sealing irregular cracks and crevices.

If you're gutting the room, meaning taking off the drywall, I'd go with fiberglass or spray foam. The first is cheaper and will work well, the second is more expensive and will work better.

I see a window in the wall there. If you're going to insulate your bedroom, put double or even triple paned glass in there if it's possible. You wouldn't believe how much heat leaves your home through windows.

Anecdote warning: 2 years ago, I replaced my own bedroom windows by double paned glass. Before that, i had to set my electric heater to blow during from October to April (Belgium, so not that cold) or the room would be too cold to sleep. After the double paning and insulating the attic (so basicall your situation), I could just let my heater generate passive heat (just heating itself, no blowing) and it would heat up the room enough to sleep throughout the winter.

The above story might be anecdotal, and Belgium doesn't get as cold as Ontario, but I still have to say that multipaned glass will save you on your heating bill.

Unless there is plumbing in any wall or ceiling or floor adjacent to the bedroom, I probably wouldn't bother insulating, but I am rather unique in liking a cold bedroom to sleep in.

If I had to appease a spouse to make the room warm while she goes about her day in there, I probably would increase the wall thicknesses to fit in 12 inch fiberglass batts wherever possible. This may call for some unique construction around the windows. That is probably far more cost effective than using the 3.5 to 4 inch space to fill with polyurethane foam. In such a miserably cold climate, it should pay for itself pretty quickly.

8
How to properly insulate a garage?
1
Can I insulate over 1/2 in. styrofoam?
8
How do I retrofit a junction box in an insulated wall?
3
Should I drywall and/or insulate my garage wall?
2
How should I insulate an interior wall between a warm humid bathroom and a cold bedroom?
3
What to insulate first? Attic, walls, kneewalls?
1
How should I insulate my workshop
2
Are insulation baffles necessary if the side attic has roof vents?
1
How to Insulate a Garage Ceiling