How do I keep my house cool especially my terrace during summer?

I live in Bangalore in an apartment on the top floor and during summer, my terrace (built of concrete) absorbs a lot of heat. When I come home and switch on the fan, it ends warming my room and it is not cool throughout the night. The sun doesn't shine through windows or the walls much since there are trees in my apartment which help, but it is the terrace that takes a lot of heat especially during afternoons. Can anyone give any simple DIY approach on how I can keep my terrace cool. (I am not looking to install any kind of air cooler.)

Some options I thought of were:

Does any one have any ideas?

insulation air-conditioning cooling
Share
Improve this question
edited May 1, 2014 at 15:07

Im not sure what building codes or home owner's restrictions there may be but this is a common solution: 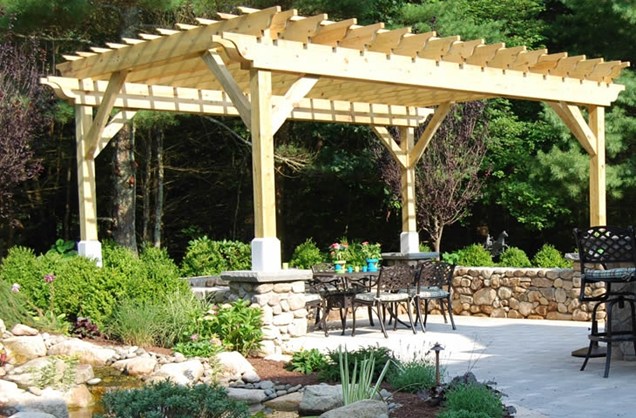 There are many types of variations that are tied to houses, stand alone, etc. It is basically a set of posts (or house attachments) with a top plate and vertical boards (pressure treated of course) affixed. This example then has cross bracing so there will be less warping over time. The key is to align the tall boards East to West so that as the sun rises its angled rays do not penetrate to the patio. The height and spacing of the vertical shade boards is based on sun angle mid summer since that is when the sun is highest. Do it right and there should only be sun on the patio when the sun is lower in the sky (winter, spring, fall) as well as possibly early morning and late evening.

Apartment associations don't usually like fabric on poles either since they stand out visually and can blow off in the wind. Maybe they will install a retractable awning or recommend one for you.

I suspect most of the heat is still coming through the window at some point during the day. Blocking the sunlight on the inside doesn't do much. The sunlight will still be converted to heat inside your apartment. A window shade on the outside of the window may help.

You could try putting something reflective on the patio and walls that get a lot of direct sun. a white vinyl or fabric mat, perhaps. But choose the placement well as it may just reflect the light into the window!

I know you said you do not want an air cooler, but any evaporating water will help keep the patio cool. We use patio misters around here. But simply mopping the patio with water once in a while or hanging some moistened towels.

I live in Lahore and all both weathers are at their extremes in this city; it gets up to 55 °C in summer and -2 °C in winters. I also live on the top floor and face immense heat, plus I am not allowed to alter the house so I can't put insulation as I don't own the space.

So I have installed wooden shades above the windows. Also I have covered my roof top with a porous Green house Sheet at a 6 feet height. It all cost me around Rs 2000 (~$30 USD), but it has significantly reduced heat on my ceiling. It does get warm but not insanely hot.

If Option 2 won't be approved and Option 1 will, go with Option 1. It should work.

You essentially need to stop the sun from hitting the terrace surface by any means possible. A shade structure of some type. Plants help too because they transpire moisture, cooling the air. But if they overly restrict airflow the cooling effect is offset by lack of circulation.

When in Bangalore, we used to live on the top floor of a 13-storey building and there aren't (m)any trees that reach up that high to block the sun.

Your option 1 won't work optimally, simply because the sun moves around too much, and unless you have some mechanism / person moving the cloth around to make sure your entire terrace is in shadow, you'll never be able to completely cover the thing.

We used to have plants on the terrace that the builder installed. After several cycles of water leaking into the master bedroom + the builder's fixing stuff, the decision was to remove said plants, all the dirt above our apartment etc., and to just retain an empty terrace. So unless you're willing to take on this (even slight) risk, this isn't a viable option either.

If it were me, I would use an air-conditioner at least in one or two rooms for an hour or so after returning home. Alternatively, a few water-filled "matkas" (clay pots) scattered around the house, specially where you have some sort of air flow, will help cool the place down with no electricity.

A light fabric shade on the terrace will cool terrace considerable and also help to make a shade for small parties. This is the cheapest and the best which I am planning to install on my terrace.

Eureka I think I have found the idea.

I have a top floor which remains very hot.

What I did is that I took some old wooden plies of 4x4. There was a old wooden door available as well.

You can use whatever wooden item you have.

Just put 4 bricks or something.

On the 4 bricks you put all the plies or wooden door, etc. so that there is a gap of 4 or 5 inches approx between the floor and the wooden item.

Wood is a very good insulator.

I have done this thing right now only, and result will come in the evening if I'm not able to write again I think you can try it at your home.

AmitAmit
1
Add a comment  |
Highly active question. Earn 10 reputation (not counting the association bonus) in order to answer this question. The reputation requirement helps protect this question from spam and non-answer activity.

Not the answer you're looking for? Browse other questions tagged insulation air-conditioning cooling or ask your own question.

10
Venting the attic space during summer to cool the house
3
Natural ways to keep the ceiling cool during summer
2
How can I block off scorching sunlight from coming through my windows?
0
AC doesn't cool room well in old poorly insulated apartment. What can I do to fix? What are the causes?
0
Can I use mylar sheets to keep my roof cool?
26
Why does my house heat up, even when it's cool outside?
0
Is moving a desk upstairs/downstairs for comfort twice a year a sign of poor insulation?
2
Will replacing windows significantly reduce solar heat gain in summer?
0
Can I use 2 5,000 BTU window AC units in my 16'×40' Park Model trailer?