Should I be able to just peel tile off the wall by hand if it is installed right?

We hired a contractor to remodel our master bathroom. For the tile installation in the shower, he started with a float-cement backing. To show quick progress, he rushed through this step and the final surface was uneven with deviations of over an inch in some places. He assured me that this was no problem and proceeded with setting the tile. To make it come out straight, he had to use well over 1 inch of thin-set in some spots: 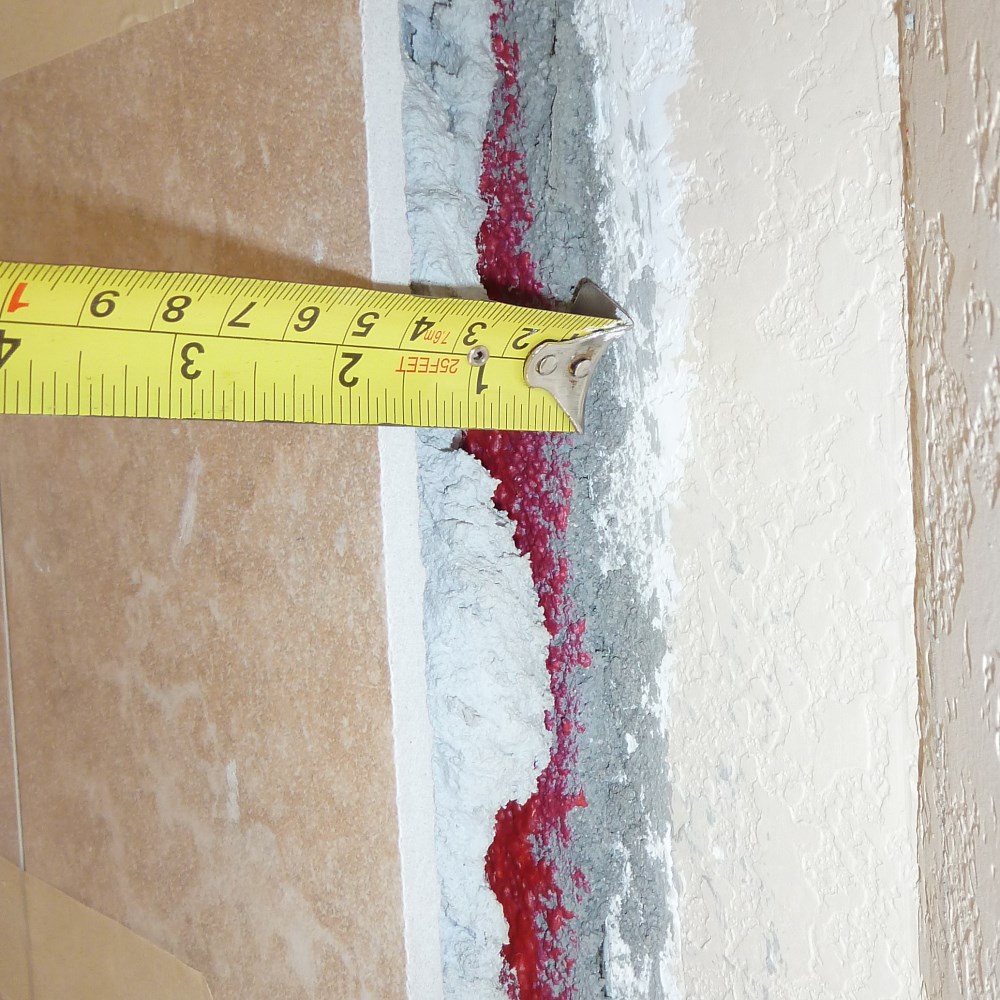 After pointing out to him that the instructions for the thin-set he used (MultiSet Modified Thin-Set Mortar by Custom Building Products) state that it should not be applied thicker than 1/4", he told me that he had mixed in some Portland Cement (Spec-Mix Type-S) to give it extra strength and that I shouldn't worry about it.

He had to pause installation for a bit and after 12 days of curing-time, I tried to see if I could peel off one of the tiles (a 7 1/4" x 7 1/4" piece that was crooked and needed to be redone anyways) by hand and it popped right off in one piece: 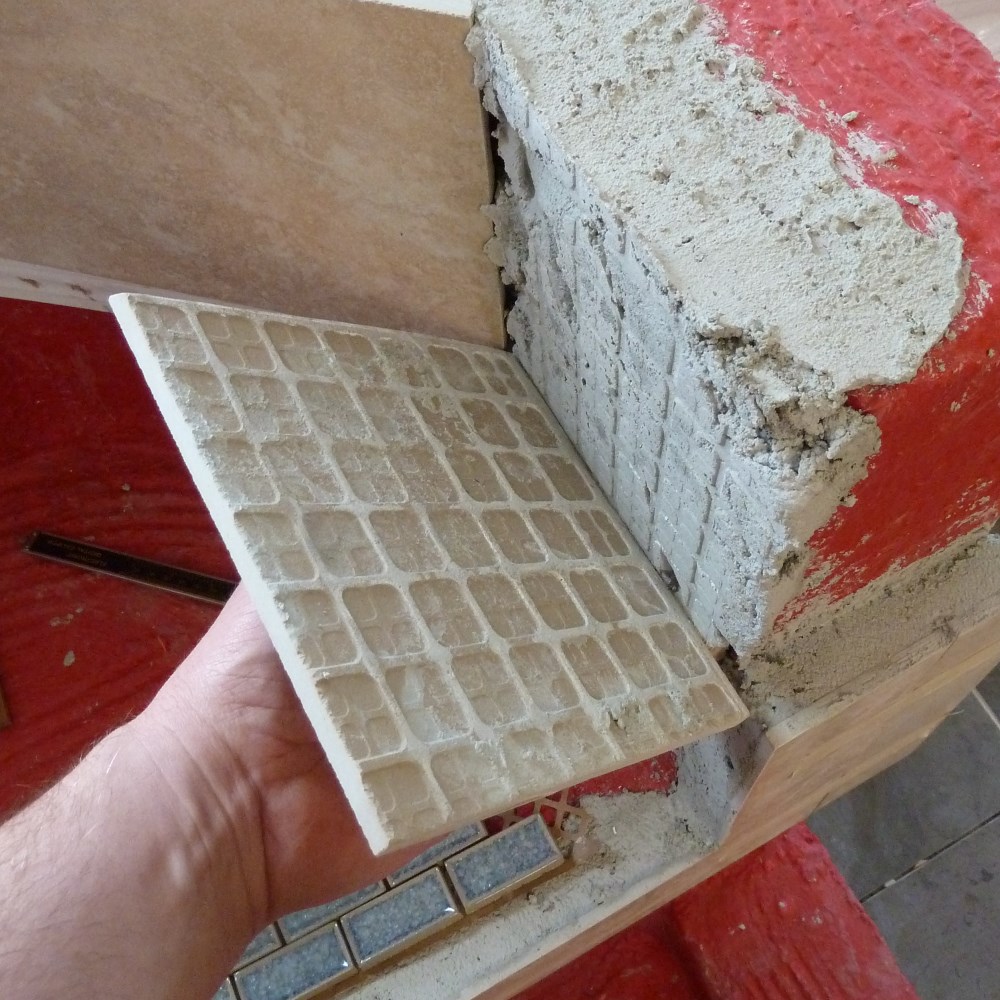 And left the wall underneath it looking like this: 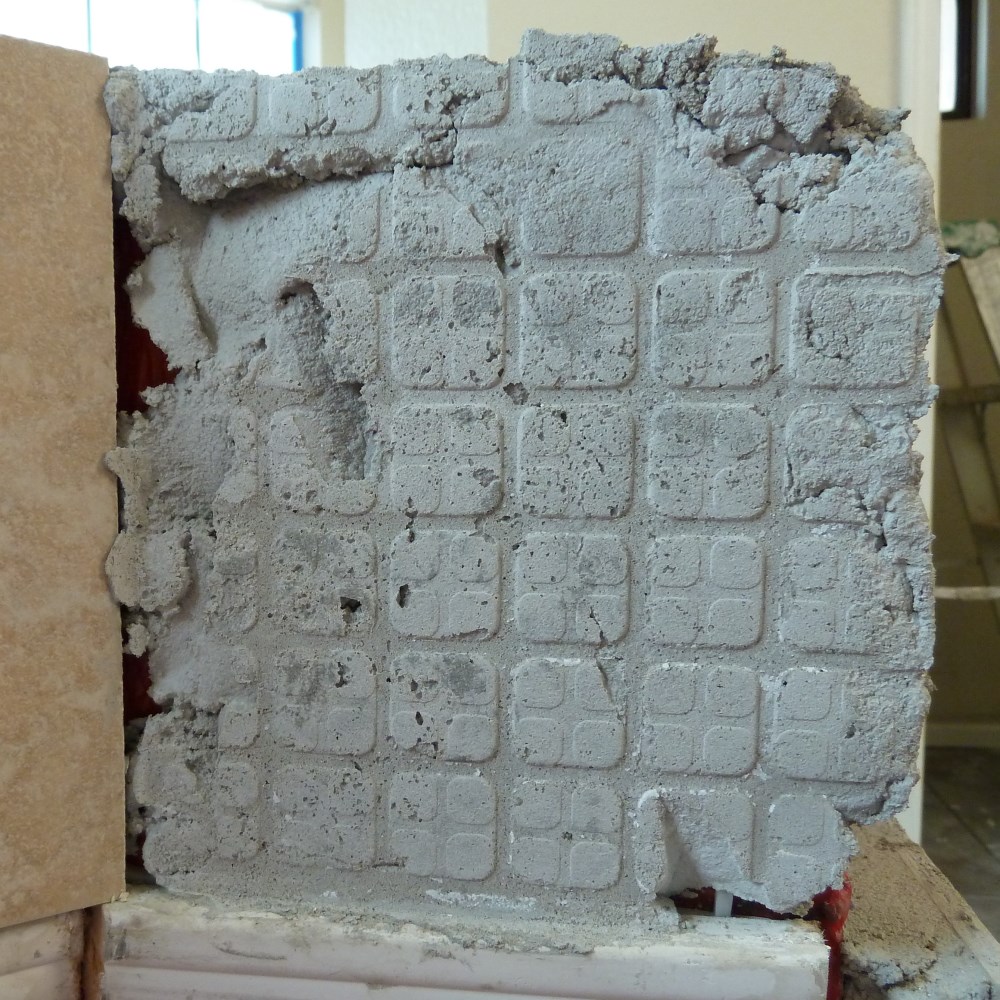 Is this how it's supposed to be or did the added Portland Cement reduce the thin-set's stickiness? Are there any other potential issues with mixing cement into thin-set and applying it in this thickness?

Portland Cement has poor adhesive qualities by itself, which is why it is commonly mixed with a polymer. By definition, "thin-set" refers to an application thickness of under 3/16th of an inch. Other common additives to thin-sets are water retaining compounds that help them retain moisture to extend the curing time for more strength. By adding additional Portland Cement, both of these properties have been compromised in the mix. As far as curing goes, the ANSI spec for thin-set performance specifies a final set time of under 4 hours (this link has a good run-down). Tiles should be difficult to peel off within an hour.

That said, there are several other issues I can pick out from your pictures:

I think @DMoore hit the nail on the head with this one. You need to have this contractor stop work immediately. The simple fact that he can't lay tile straight (and isn't using spacers) is fire-able in my book sub-strait aside - now you're talking about what you will see when it's done. Schedule a time for a building inspector to come by and take a look at it (you did get a permit, right?) - they are generally less busy this time of the year, so will be a lot more willing to give you a good opinion. Tell them that you are concerned that the work being performed isn't up to code and that you'd like somebody to take a look before it gets covered up.

As far as how I would go about an installation like this, I would generally back everything with framing and half inch cement-board. If I was worried about deflection at all, I would thin-set a second layer of cement-board to the first layer with staggered joints. I haven't seen a shower around my neck of the woods done with float-cement backing that was installed more recently than about 1960. Even though the materials cost more, if I'm billing $40 to $50 an hour for labor it still costs half as much overall, doesn't have long down times for curing, and is a ton easier to work with.

Whatever he did to modify the thinset obviously does not work to the most extreme power - so it doesn't matter. Obviously he added something to the thinset or your tiles would stick much better. If it was a pure "thinset fail" then it would be pulling from concrete. There is no use arguing with the guy. It didn't work. Get your money back. Don't let him touch your house again. Sorry.

I am also gonna take a wild guess and say you paid for the "job" not materials + work separately?

Note based on author comment: Markus - I always suggest that people pay for their materials and then pay for labor separate. What you are experiencing is someone who has no idea what they are doing. Creating concrete shower walls is a bigtime skill that most good contractors don't have - sure as hell I don't and I have done 20+ showers on houses I have flipped. He is using concrete because it is super cheap and super labor intensive. The problem is that it is a major PITA to demo too. A big shower could be a be a couple thousand pounds. Most people use concrete board these days - even really bad contractors know this. I can prep a shower surround and the next day be done tiling it. Everything that he has done needs to be demo'ed. You cannot have bumpy/curvy concrete walls in your bathroom and you don't need concrete period. Every time you let him do more work you are costing yourself more money in demo and materials.

5 days of curing time (concrete does not dry, it cures), is not enough. That said, the installation is janky.

Not the answer you're looking for? Browse other questions tagged concrete shower tile code-compliance thinset or ask your own question.

13
Do I have to remove the old thinset before installing new tile?
2
Should backer board be installed all the way to the ceiling around a shower?
1
Properly waterproofing a shower area sharing a living room wall
0
Grout or thin set oops
7
What should be used between a concrete tub and wall tile?
0
Mudding over cement board in shower
1
Do i need to worry about leveling the floor if there are dips no more then 1/8 "
2
Is it better to use thin-set or self-leveling concrete on top of a shower pan, mud-bed to improve the slope and make it smoother for final tile layer?
0
How should I fix the tile at the top of my shower?