Is there a motion sensor light switch that does not need ground?

My house was built in early 1950's and all electrical switches do not have a ground. This was found out with an electrician when I asked them to install Lutron Maestro, but it would not power on since there was no ground to connect it to.

His suggestion was to find a motion sensing light switch that did not need ground, but he could not make a recommendation off-hand.

Do motion sensing light switches that do not require ground exist? Or do I have to build/rig them somehow. Unfortunately, due to cost, I cannot afford to add ground wires to the areas of the house that I need these at.

EDIT The electrician connected the Meastro unit then attempted to turn it on. Pressing the button or moving in front of the sensor did not turn it on. He also attempted to connect the unit's ground to either neutral or hot, but did not work either (I can't recall which). Guess I have to spend the loot and run ground wire :(

Occupancy sensors, timers, dimmers, and other "smart" switches often are required to be independently powered. If you look at this diagram from the devices documentation (PDF), you'll see that there are three ways this requirement is achieved. 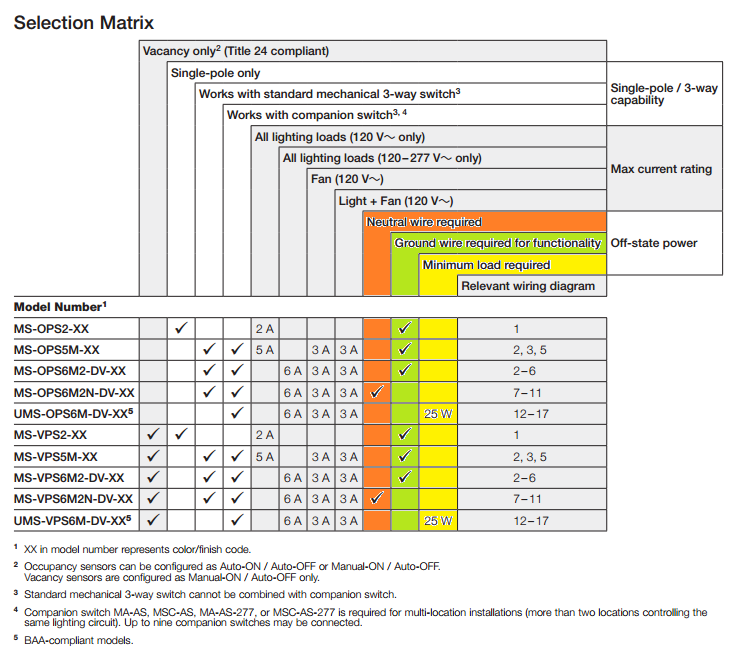 The first method, is to simply require a neural wire. In this configuration, the device draws power using the ungrounded (hot) conductor and grounded (neutral) conductor. It also has a separate switched conductor, that it uses to control the load. 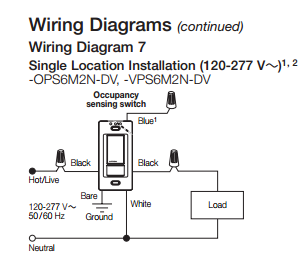 This method draws power using the ungrounded (hot) conductor, and the switched conductor. So the device is actually in line with the load. 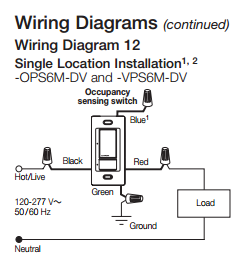 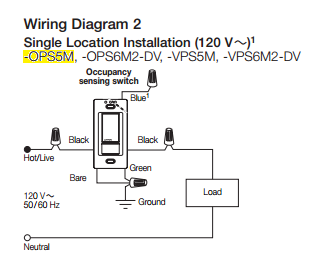 Notice there's a bare, and green wire connected to ground in this diagram.

The device you're using (MS-OPS5M-XX) requires a ground to operate, according to the documentation.

One solution, would be to install a grounding conductor with this circuit. This will likely require quite a bit of work, and might be quite costly.

It may be possible to extend a grounded (neutral) conductor from the light to the switch box, which could then be used to power the device. In this case you'd have to purchase a different device (one that requires a neutral rather than a ground).

I think you probably mean the switch didn't have a neutral (which is connected to ground but not the same thing as "ground").

If you have a switch with additional features that need electricity there are two options:

Sounds like your chosen motion sensor is of the first type, i.e. it requires a neutral. Your electrician is suggesting the second type. There may or may not be such a sensor.

Can you take the cover off a switch and take a photo to show us?

You need a ground. Neutrals aren't always in a switch box (depends on how the wires are ran). You might be able to run a 14/2 from the switch box to the nearest receptacle box and splice the ground connection in the receptacle to your switch. Cap off the white an black in that 14/2. As long as the ground going to the receptacle is on the same system that is providing power to switch your good. Might not be pretty but it will work.

Looking at the instructions for this unit I see no reason it cannot be used in a replacement application where no ground is present.

Using the green wire which comes out of the switch, attached to the neutral is an acceptable method to get this type of switch to function. Honestly, if anybody has violated safety rules, it's the manufacturer of the switch. As a current carrying conductor, this should be a neutral connection, and a white wire respectively. Green/ground connections should only be intended for a safety current path, not for the operation of the switch. Since there is no exposed ground or neutral with this switch, there is no risk of contact to a live conductor when installed. I don't see how this switch would pass leakage current testing with UL or any other testing organization.

For those saying "Your license should be revoked, and you should be thrown out of school.", get your panties out of a twist, he's right, the manufacturer is the guilty party here.

People in here are talking about these electronic switches and the grounds that are on them as though the ground is a current-carrying conductor when that is definitely not the case. The reason there is a ground in many electronic circuits is that it is used as a zero reference point for the operation of electronic components that I will not get into discussing. Many electronic circuits do not behave correctly without the ground connection. These are not simple electric switches, there are some complicated electronics involved that require the ground point.

The neutral is required to power the motion sensor and solid state timer. It cannot function without at least 1 hot and one neutral. Since all neutrals should be joined in the breaker box to one terminal block, any neutral in the house will work. Also (while not recommended, by the NEC you could wire neutral to anything in the house that's grounded, plumbing, electrical box itself, although being the house was built in the fifties the NEC wasn't as strict so finding a bonded/grounded surface may be difficult. But you have to provide a path for the neutral wire in the switch to get back to the neutral/ground terminal in the breaker box, one way or another to get it to be functional.

Small print is, (The NEC requires that no ground wire, may be used as a current carrying conductor.) Although the ground wire ultimately meet the neutral wires they shouldn't have any current. But on the other end probably most of the stuff in your house doesn't comply with modern NEC anyway...

More than likely there is a ground wire or neutral at least "passing" threw that switch box. Probably wire nutted and tucked away in the back. I have an occupancy sensor that requires a neutral, my old house only has the ground and hit in the swotch box. I'm a licensed electrician and major in electrical engineering. Think about it. The neutrals and grounds are all tied down at the same buss in the panel. So I tied my neutral of the switch to the ground in back of box and wham its on working fine.