Most solutions seem to involve a dimmer switch that chops a high-voltage AC supply, and a driver per light (often integrated into the bulb) that detects this effect and simulates it by flickering or current-limiting the LEDs. I can see this makes sense for retro-fitting into an old circuit, but seems overly complicated when starting from scratch

I'd prefer to have a single 100W transformer; a 12V DC dimmer switch that strobes the output or limits the current; and simple LED spots

Many thanks for any help!

It makes sense - look for "low voltage LED Lighting" to see what's available, or slide on over to Electronics to build your own.

Dimmable LED bulbs are those with drivers built-in that are "dimmable" - if just running controlled current to LEDs, they are all "Dimmable" (lower current, lower light) so, no, you don't want an LED described as "Dimmable" (nor one described as 12V, probably - a "bare" LED with no other parts attached is best when you are going to feed it controlled current.) If you purchase a "12V dimmer" pre-made, follow the dimmer-maker's suggestions on types of LEDs to attach to it.

What you can use is a repeater connected to your original dimmer source and you can get them in various sizes. These are for RGB, Dimmers or just standard power supply.

Really, there is no such thing as dimmable or non dimmable LED's. The drivers are dimmable or not dimmable, like you mention with th the MR16. But that really depends how they are being dimmed.

LED dimmers work by PWM (Pulse Width MOdulation) instead of increasing or decreasing voltage. So the repeater listed above, recognised the frequencies, and applies them to the out put side with the wattage you need.This is why dimmers are expensive, because they are really micro circuits producing frequencies, instead of just limiting the voltage, which may damage some LED's (maybe this is the loosely coined 'non-dimmable' term we see) allot quicker than usual and causes uneven intensity shadows. But really, any LED can be "dimmed" using PWM.

But you can get something like this, which is fairly decent powered, LED dimming module. 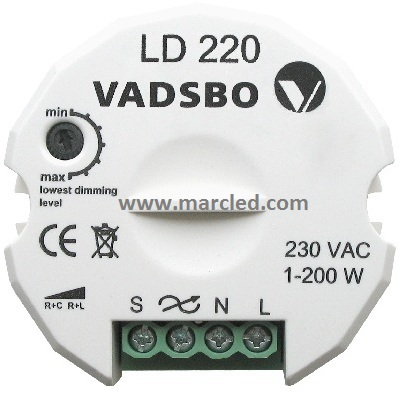 Allot of these devices are difficult to find locally and if found locally have various names, and are usually highly overpriced. So always look on the internet before any salesman convincing you that you're paying 100$ for super quality... chinese junk, you can get yourself for 10USD from cheapBay

When starting from scratch, I recommend to look at

and as a very last resort at "retrofit" products. Even the ones calling themselves "dimmable" are very poor in dimming (large hysteresis, non-uniform behaviour when more bulbs used together)

For 1. and 2. OSRAM and ZUMTOBEL have good transformer and dimmer products, both stand-alone and DALI bus driven

I have now used this approach in my bathroom and can confirm it works very well. The "non-dimmable" bulbs dim perfectly well with no noticeable flicker or colour change. The transformer sometimes makes a high-pitched buzz but this isn't audible when the cupboard is closed. I found two commercially available 12V DC PWM dimmers - a basic one intended for boats/caravans and a very snazzy touch-screen one from China (making my own dimmer switch is a project for a later date) 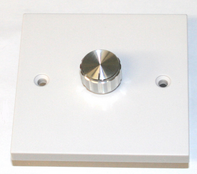 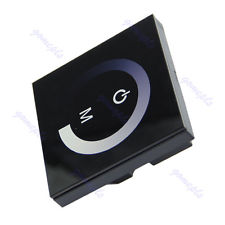 0
How to fit an LED transformer / driver
0
Could switching from a dimmable to a non dimmable LED bulb have caused a light fixture with dimmer switch to fail?
0
Safety of hard wiring cable lighting intended for halogen bulbs in a circuit with LED dimmer switch
1
Track Lighting LED bulbs flickering
1
GU10 LED lights strongly strobing (no dimmer) UK
1
Is it safe to use this dimmer on LED bulbs?
0
One Flickering LED Bulb On Switch with 4 Bulbs
4
Why does a Smart Switch on/off have lower wattage for LEDs vs incandescent