What is the proper procedure for replacing rusted toilet anchor bolts?

I have a 1.6 gallon American Standard toilet that rocks a little from side to side. Upon closer examination, it looks like at least 1 (or both) of the anchor bolts are loose (they had corroded material under them and I can turn the bolt (not just the nut) so I'm convinced something is corroded. 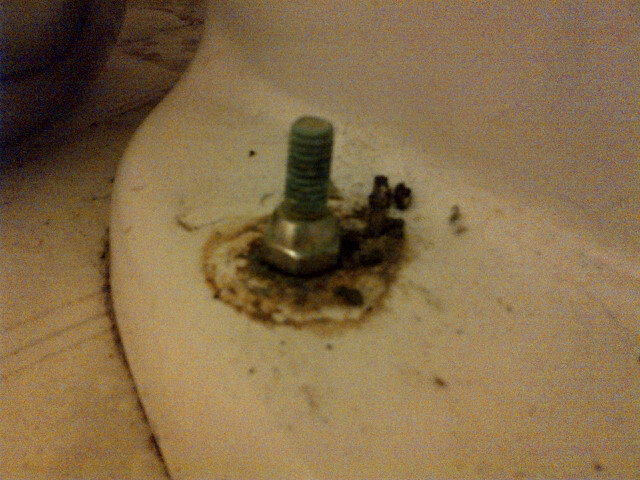 I'd like to replace the bolts but I'm concerned that this is going to be opening a proverbial can of worms so I'd like to know what I'm getting myself into.

Specifically, I have two questions: 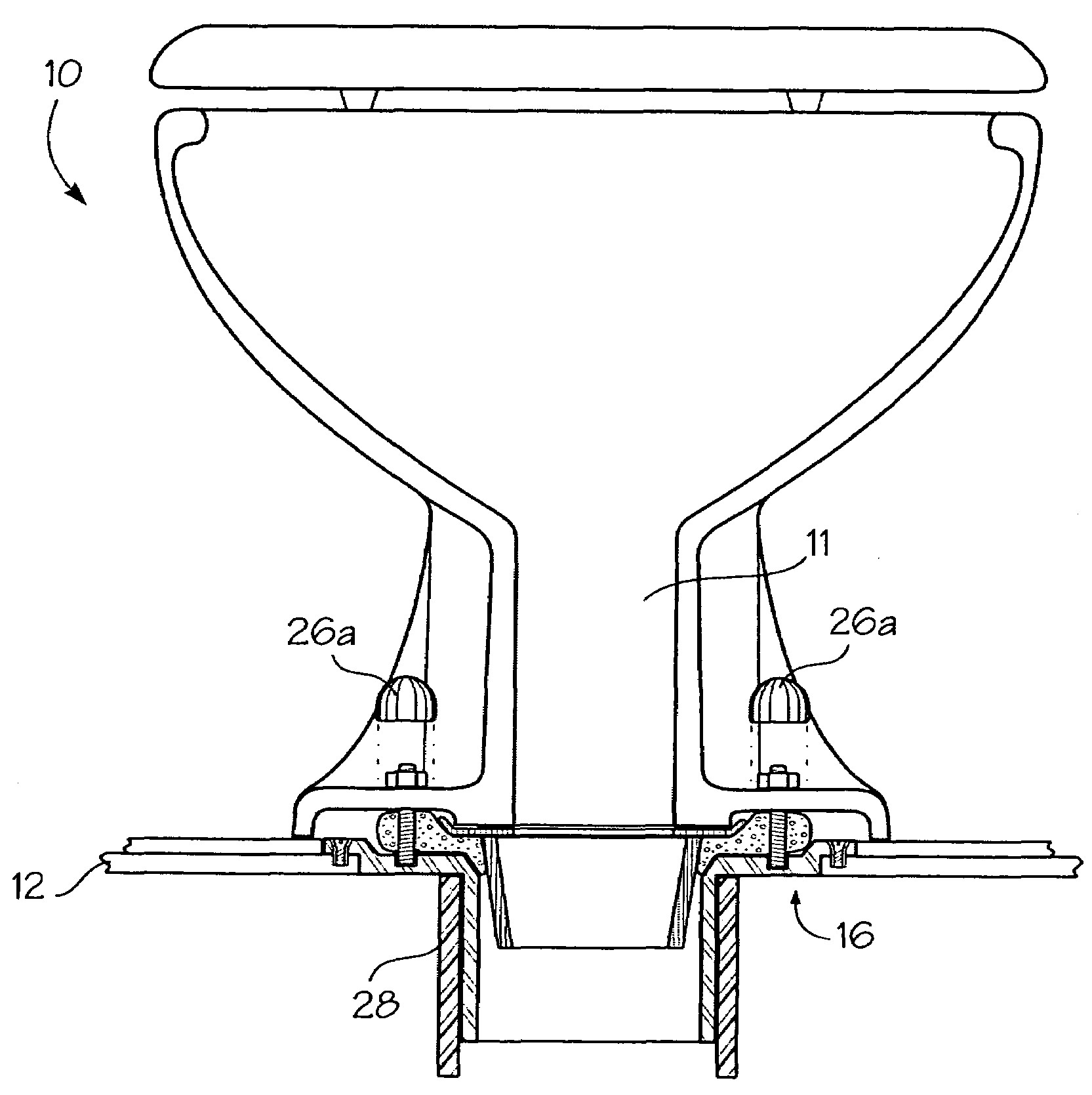 That image is part of U.S. Patent 7069603 showing who-knows-what. Here is what the flange and closet fitting have looked like in new construction for the last 20 years or so: 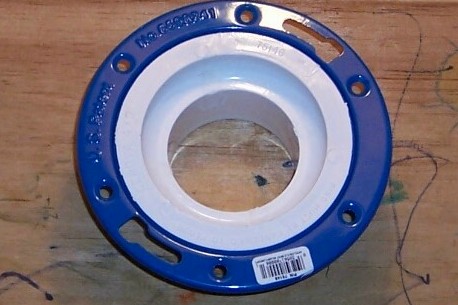 The six small holes are for fastening the flange to the flooring and indirectly to the subfloor. The two enlongated circular slots are for the heads of the bolts to slip under to fasten down the toilet. Shown with a new wax ring they should look like this: 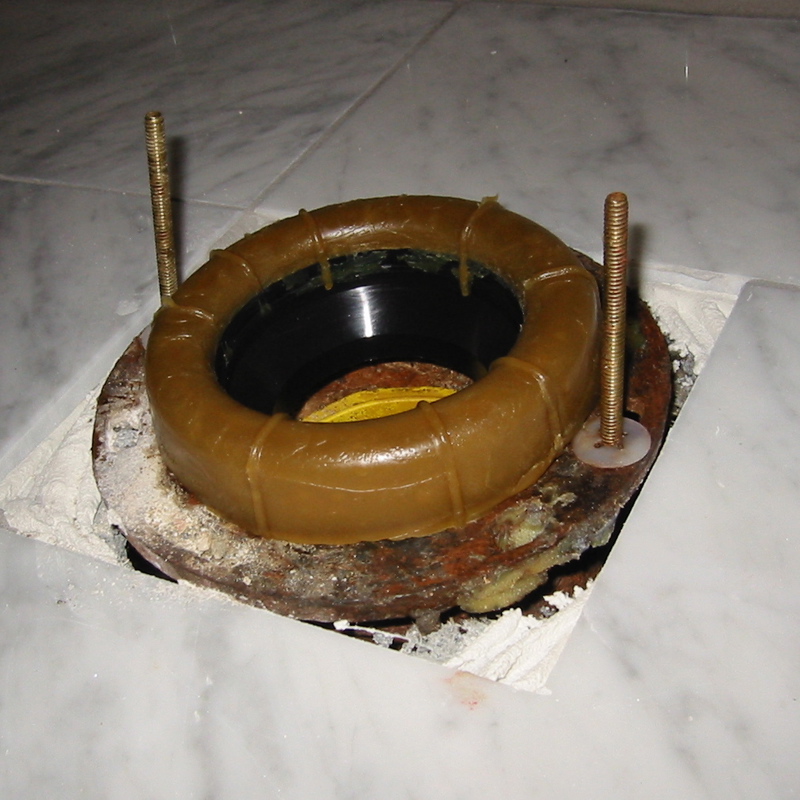 Replacing these are simple in theory.

With everything ready to go, this is 60–90 minutes work. If everything goes wrong, it could take half a day.

The biggest danger is that once the toilet is off, you will see sub-floor (and maybe a floor joist) with dry rot and worse. Then you'll have to choose whether to just fix it up as best you can, or tear the floor up and replace everything that is wrong.

There's a good chance the toilet flange is corroded as well or it's attachment is compromised.

The flange attaches to the structure and the bolts slide into the flange and nuts and washer hold toilet down.

You're going to need to drain the toilet and remove it. May need to cut the bolts if you can't get the nuts off.

Inspect the toilet flange and see if it's attached properly and doesn't move. If the flange needs to be replaced there are repair flanges like that are easy to install provided the wood under the toilet hasn't rotted in which case you'll need to repair that. The two slots on the side is where the bolts head go. The other holes are for screwing the flange down to the floor.

A wax ring creates a seal between the outflow of the toilet and the drain pipe. You're probably going to gag a little when you remove the old one cause, well it's gross and feels like dookie.

If the floor is not level they make these little plastic shims to slip under to keep it from rocking.

Since you're completely removing and reinstalling the toilet it's a good time to think if you want to replace it with a new one for any reason like getting a more efficient one or a heated one that spritzes you clean with Evian or something.

Don't over tighten the nuts or you may crack your crapper.

Two tips that may help:
A wet/dry shop vac may be used to get the water out of the bowl.
The easiest way to lift a toilet is to take a suitable rope or strap, and wrap it around the bottom front of the bowl, cross the ends at the base of the tank behind the seat, then go round the back of the base and tie the ends, or bring them back round to the front and tie them if it's easier. You should now have a figure 8, with one loop around the bottom of the bowl at the front, and the other under the tank. Straddle the bowl, grasp the rope where it crosses behind the seat, and lift. Most toilets will balance quite well if lifted this way, and it's much easier to lift the weight in this manner than trying to grasp the bowl or tank and trying to lift. Lifting in this way also works well when it's time to put the toilet back in place.

The nut may turn loose as bad as it looks. The bolt is usually brass on older installs so the nut will not fuse to the bolt. But if it is... Grab the exposed part of the bolt above the nut and loosen it enough to get about a 1/4" of space between the nut and the toilet. In this space cut the bolt just above the toilet base to remove the nut.

Remove the toilet after you have removed as much water as possible using the plunger first, then a bucket and sponge. This will still not get all of it but if you keep the toilet as level as possible, you won't make a watery mess. Have a trash bag handy to set the toilet in so it won't drip any where too.

To re install, you will see the bolts you cut off. They reside in a slot that is part of the pipe that the toilet sets on. New or old, the toilet flange is shaped the same way, just the materials have changed. 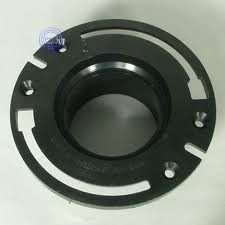 The bolts are "T" shaped so they do not readily spin, although when corroded bad enough they will. 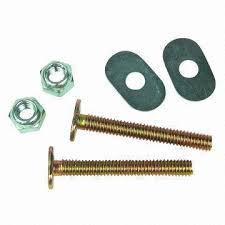 There are notches that the bolts can fit into also, if the flange is situated for that install too. But the slots are what I have seen used most of the time.

I see some of the answers mention what has been going on in the plumbing industry for the last 20 years or more. There is a new solution that I came across recently that is pretty innovative and sets a precedent in the market.

Its called the Culwell Flange. This flange comes in 3, 4 and a 4x3 inch models in ABS and PVC. They offer glue in hub style, a compression fit and a drop fit styles to suit your needs.

Their claim is that they seal to the existing subfloor as a means to keep out any water that can get in and cause damage. I recently installed into a bathroom I was renovating for accessibility, that is how I came across these flanges.

I found mine on Amazon, but I believe they have a storefront way to purchase as well. Lots of videos on Youtube, and they have a pretty nice website

I would highly suggest looking into these flanges when you replace your flange on your commode. They cost more than the average flange, but their value seems to be invaluable. Replacing the flange seems to be the best answer here, and it is my experience that tells me that is your problem. Replacing is a pretty easy task, but does take a little bit of time and patience.

0
How do I remove mold seeping from under the toilet?

1
How do I make sure I get a replacement toilet tank that fits the bowl?
2
How can I repair a toilet that is leaking at the base?
8
How can I cut off the rusted closet bolts holding my toilet?
3
PVC toilet flange replacement problems
0
Better cap needed for toilet bolts
1
How should I repair a pvc flange set into concrete slab?
2
How to fill a narrow crevice around my toilet waste pipe with concrete?