What are reasonable expectations about grout width accuracy in a professional tile installation?

We are currently redoing our master bathroom and our contractor just got half way through laying the tile on the floor. The grout was supposed to be 1/8" wide, but there are quite a few places (mid-field) where the gaps between the tiles are much wider or smaller. The tile we chose is a dark gray limestone-look porcelain and we want to combine it with light (platinum) grout, so the grout will stand out quite a bit relative to the tile.

Here's an example of what the floor looks like: 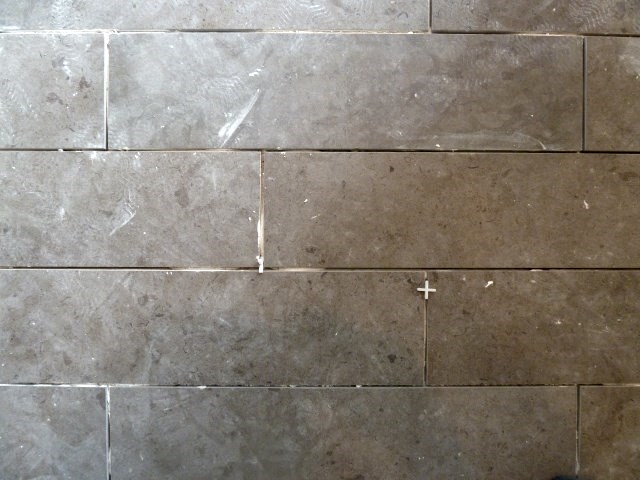 It's a bit hard to tell since the grout isn't in yet and the floor is dusty, but for reference, I placed two of the alignment spacers into the picture: In one case, it easily fits sideways into the grout and in the other case, it barely fits the correct way. So, one grout-line will be almost twice as wide as it's "direct" neighbor: 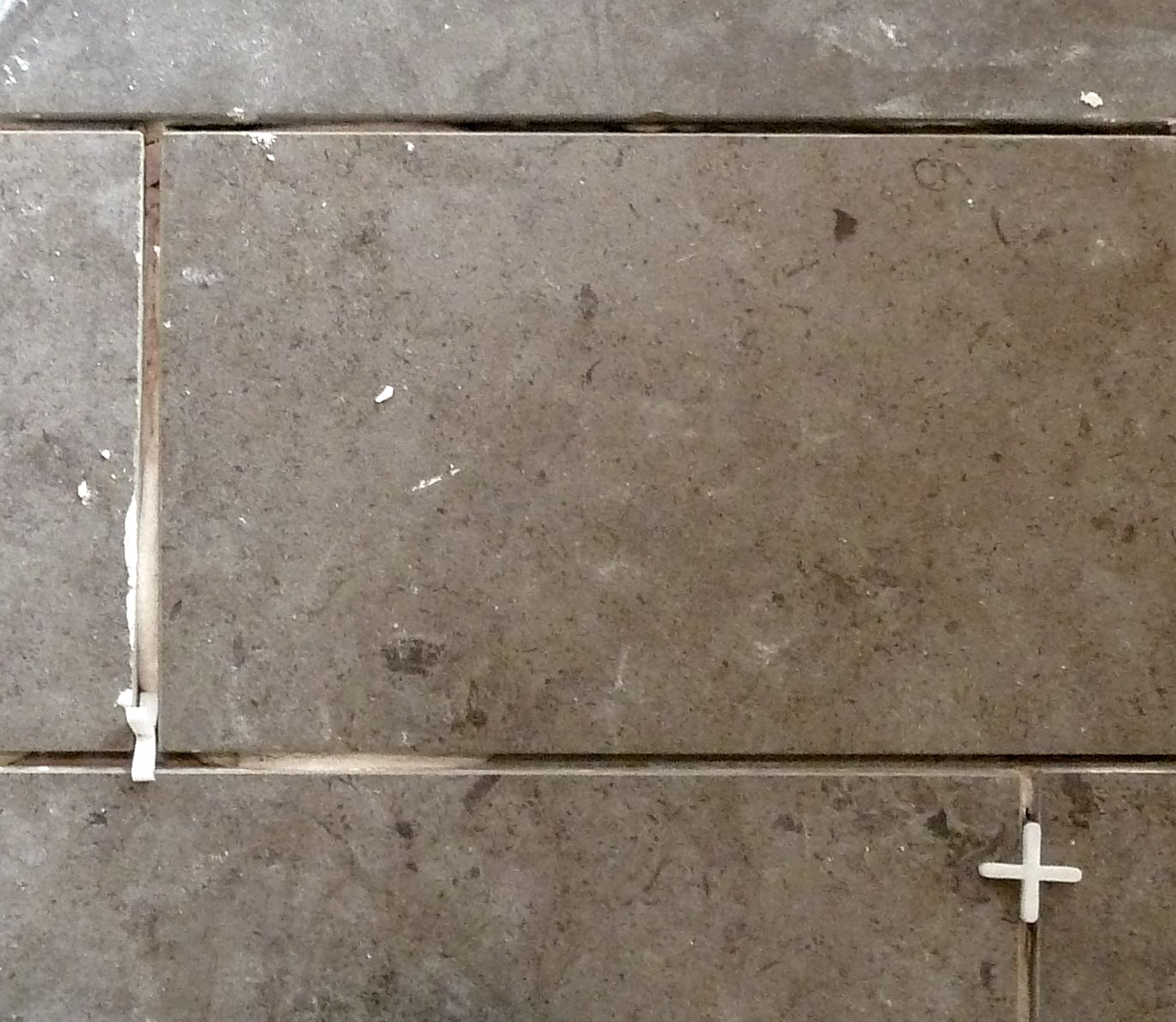 There may or may not be an easy answer to your question. I would start by calling the grout and tile manufacturers to get their opinion. In general though... You should reasonably expect to get the quality of service you contracted and paid for.

Bottom line is do you think you're getting what you paid for. Not what you think you paid for. If you hire the best electrician in your area to paint your kitchen, don't expect to have the best painted kitchen in town. If you don't hire someone who specializes in tile installations, don't expect to have the best tile work either. If you hire the best tile setter you should expect to have an amazing tile job. You should always check references and try to see examples of their work from the people that you found them through so you have an expectation on the general quality of their work.

Looks like a 3x9" tile (or somewhere around there) which results in a lot of grout lines. On top of that you want thin grout lines. It all adds up to a difficult tile installation. At what point was the contractor aware of the tile you were using? Was it when you spec'd the job or the day he showed up to lay the tile? Usually there's a little bit of blame on both sides.

I'm just a DIY'er but I would have used more tile spacers than he appears to have used (based on the marks in the mortar not the spacers in the photo) and would have scooped out any excess mortar in the joints and off the faces of the tile before everything dried. There may however be other issues that affected the spacing that were outside his control or the budget for the project.

Things may look different (better or worse) once the grout is in. Maybe you want to put grout in a small section before the rest of the tile is laid to get a better idea. If you're not happy talk to your contractor to see what can be done. Depending on the situation it's probably fair that both parties eat some of the cost to redo (or not.) Or just get a different contractor.

Found this info from the Tile Council of North America's FAQ There are also apparently some ANSI Standards on this.

What is the standard for variations in grout joints?

When evaluating grout joints, it is important to consider that the grout is used to adjust for differences in the following:

Variations in the size of the tile Changes in the plane of the substrate Changes in the thickness of the tile (often this applies to hand-molded tile) Variations in the rustic profile of the tile The standards for the manufacture of tile allow for variation from tile to tile. While the standard details this exactly, it is not uncommon for some manufacturers to ship tile with about 3/32" difference between the largest and smallest tiles in a box.

Grout must adjust for these differences between tiles so understandably there can be some variation in the width of a grout joint.

Generally, it is advisable to use a grout joint at least two times the average difference between the largest tiles and the smallest tiles. A smaller joint will exacerbate the differences between tiles as the human eye can readily see very small differences as a percentage of the total grout joint. For example, while a difference of a 1/16" of an inch may seem small on a 12" tile, this is readily apparent compared to a 1/8" grout joint.

Clearly, grout joints also accommodate both changes in the thickness and profile of rustic, hand-molded tile.

Perhaps due to these variables, there is not a numerical standard to which the tile grout joint must conform.

ANSI A108.02, Section 4.3.8 of the ANSI A108 standard says, "Nominal centerline of all joints should be straight and of even width with due allowances for hand-molded or rustic tiles."

ANSI A108.02, Section 4.3.10 addresses variations in the plane of the tilework. This section states, "Finish floor and wall areas level and plumb with no variations exceeding ¼" in 10 feet from the required plane."

However, it should be noted, elsewhere in the standards the plane of the subfloor is required to be similarly flat.

Tile installed by the thinset method is really a surface finish that will follow the plane of the substrate. As such, variations in the substrate will be reflected in the tile layer, unless additional leveling is performed.

If you're not happy with the job or you have concerns, you should talk to the contractor. Make sure it's very clear what quality level you expect, and that you're concerned that this does not meet that expectation.

You may find that there was a reason the tile was installed in this way, and that the experienced tiler knows you'll never notice the flaws in the finished product.

If you're inches from the floor with a micrometer in hand, you'll notice every imperfection. However, if you're 6' from the floor, your eyes might say it's good enough. Most times in building, it's not about being perfect, it's about looking perfect. Once the floor is done and the grout is in, you might never notice the differences. Though the opposite may also be true, and the grout may make the differences stand out badly.

The fact is, you've hired the contractor to complete a job. If you're not happy with the work, you should discuss it with the contractor. If they are unwilling to meet your expectations, you may want to consider finding a new contractor.

Having done a few tile jobs for myself, my rule of thumb is 25%. That is 1/8" grout lines should vary no more than 1/32. I'm somewhat more stringent on continuations. e.g. I don't like a line that goes from 5/32 to 3/32 in a jump. For this reason I prefer running bond patters. One direction I can adjust without it being noticeable.

Before you get in too much of a snit about this, go look at commercial tile jobs. Washrooms are the classic example. See how consistent they are. A lot of them are not very consistent, but few people notice.

While you didn't ask: ways to fix:

I think there are several variables that are missing from the question.

All of these are basic variables of a floor tile install. I am not saying they did a great or horrible job but all of these things factor into that. If you had perfect tiles, perfect subfloor, and paid them a pretty fair price then I would say that the install is on the low end to poor. Really the situation sucks because it's done and it sounds like it's not bad enough where you will demand a redo. So you are stuck in the middle. Contractor might give you a discount or tell you to go to hell. I doubt they would pull up the tile and redo it. Also I doubt that you want them pulling up just a few pieces which could present more issues.

What does it matter? Are you going to ask for a rebate? LOL, I can just see the judge's face on that one: your honor, the grout lines were not exactly the same width.

If you just hire somebody and cross your fingers, your option is you get what you get.

If perfect grout lines were an objective, you needed to manage that up front by finding out how the guy uses spacers and the results of those spacers on your tile, possibly by doing a limited demo tiling as an experiment.

Also, FYI I measured your photo and there is approximately a +/- 1% difference in height among those tiles.

Spacers play a very important roll in the setting of the tile. Flat walls and floors are also important, and the proper use of a level, and plumb, is probably the best thing to start with. In 42 years of contracting, we have never encountered perfect conditions. We always have to improve, and were often limited to the Homeowners low budget. We also found that all tiles are a little different from each other in finishes, dimensions, thickness, and not to mention, the walls and floors are not level, square, flat or plumb. This is a huge problem, and even a professional contractor like my company, will need additional money's to properly resolve. A tile estimate is for installation of tiles, and there should be contingencies for the unforeseen, and necessary improvements that will have to be done to get a great job. When we are approached with a client that will not spend what they deem necessary, then we will not take the job. Because they are not going to pay for the necessary things to make it better than it will be. Also, the contractor that is hired should be carefully selected, legal status, and have superior ratings, and satisfied word of mouth clientele. Or you should not hire. Purchase the best quality products for a reasonable price, and find the best contractor for the middle price range, and expect contingencies to arise, if you want a great job...A demonstration using your choice of tiles on a separate piece of plywood, will help identify a lot if qualities, and typical imperfections, prior to the project being started. Rendering, photos of other tile projects, drawings, can help create a better project, and resolve a lot of questions. Good Luck

John B.John B.
111 bronze badge
1
Add a comment  |
Highly active question. Earn 10 reputation (not counting the association bonus) in order to answer this question. The reputation requirement helps protect this question from spam and non-answer activity.

Not the answer you're looking for? Browse other questions tagged tile grout gap or ask your own question.

3
Questions after a test-run grout replacement
6
Can new grout be layered on top of old grout?
8
Water seeping from grout in tile shower
0
Tile and grout installation
1
How should I handle reflooring the bathroom of an old house?
1
How to cut rubber spacers on mosaic tile