Would connecting the downpipe to a gas boiler inlet save energy?

I have a condensing gas boiler for tap-water and central heating. Not very far from the inlet there is a downpipe outlet for the sewer. Since this smelly pipe is partially filled with the same (expensive) gases that I'm using to heat up the water, how much would I gain (if any) by directing it to the inlet of the boiler? 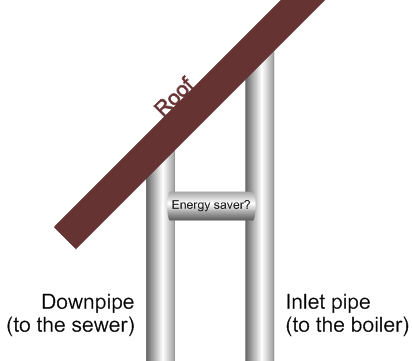 There are a few factors that I was considering, but have no answers for:

In order to find an answer for point 2, I opened my boiler to see if I could find any sign of a CO2 meter which would indicate that the boiler could regulate the air/gas ratio dynamically, but it doesn't look like there are any electronics or wires up there.

Since gas-bills are well over €500,- yearly, and the cost of a small peace of pipe with compound materials is negligible (guess I've already got it all in my shed), even a small margin would be worthwhile.

Surely I'm not the first to come up with this "quite obvious" idea? However I could not find anything on the net regarding a study of the pro's/con's of this idea. Any pointers to studies are welcome!

Thoughts on a sidetrack (related, not this question, and not seriously considering):

Stretching this idea farther, if I'm the only one doing this in my neighborhood, I might have a relatively high gas concentration, and maybe I could build an installation that would extract gas and eliminate the need of the expensive energy-company's gas? Off course I would have to be careful not to exaggerate, if the pressure in the sewer gets too low, then all the siphon's and water seals would get emptied in the whole neighborhood. I'm also wondering if there would be any legal issues involved with "stealing sewer gas". If too many people in one neighborhood would do this, the effectiveness would diminish quite rapidly.

So the status so far is:

The sum of these is a bit negative so far. Maybe this question should be transferred to physics?

You would gain... Sewer gas explosion.

Never should sewer vents be exposed to any ignition source...

In mines it's known as firedamp and it kills indiscriminately. All it takes is the proper ratio of flammable gas to oxygen and you have a fuel-air explosive.

Sewer gas is vented to the atmosphere for several reasons:

For more information on what you're playing with, NACHI (National Association of Certified Home Inspectors) has this nice page.

Not the answer you're looking for? Browse other questions tagged water-heater pipe boiler central-heating sewer or ask your own question.

4
Why are steam radiators used in the USA?
3
Can upgrading my boiler save me money?
2
How can I neatly take washer waste around the downpipe?
0
Gas combi boiler raditator flushing to clear dirt
1
Hot water (steam?) gas boiler not engaging burners, low pressure, sight glass full
0
Replacing a gas boiler fan - UK gas safe regulations
1
Gas Boiler Furnace not igniting
0
What's the purpose of a pump on water heatr inlet?