How do I find the source of the water leaking through the ceiling?

I live in Minnesota in a single story rambler with full basement. In an upstairs corner bedroom I started noticing some water leaking in the closet ceiling a week or two ago (picture is current, it started much smaller). 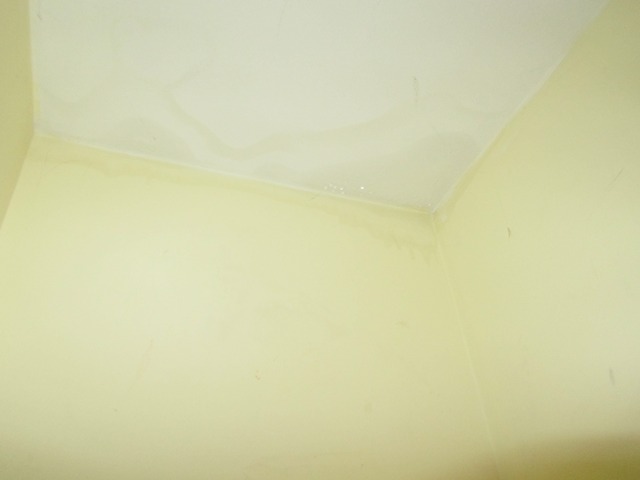 We've had a record amount of snow fall this year. When I first saw the leak, I realized that my roof vents were covered with snow. On Christmas day, I shoveled off the entire roof. Since then we've had a few light snows and warm days too, so there's been some accumulation then melting. Right now there's nearly no snow on the roof, and the gutters still have some ice in them.

But the leaking is getting worse. Now has spread across the entire edge of the wall. 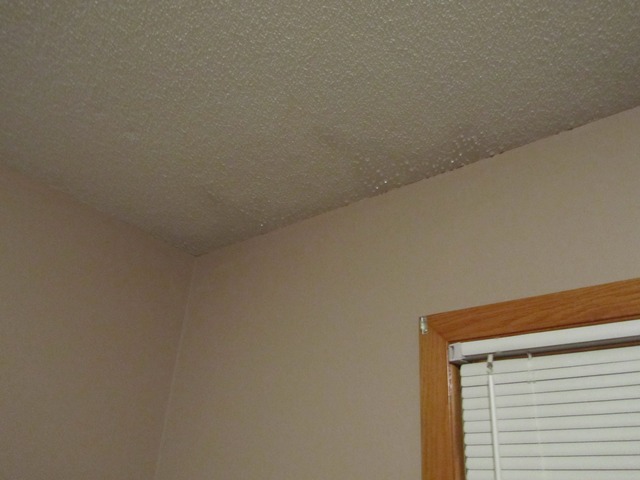 There's also water dripping into the inside of that window, and there's a stalagmite icicle in one of the windows about 6-8" tall.

Today I went into the attic to look for a leak. I was unable to find one, however.

There were a couple spots under vents or pipes were a little frost came through and melted, and underneath the insulation was slightly damp (and frozen).

But, as best as I could see, near the edge of the house above the ceiling in the pictures, there was no evidence of wetness or frozen water. Not any amount I would expect to see based on the damage. Now, on the roof above there is a thin layer of frost - across much of the length of the house actually. Could that be melting on warm days and dripping down? But yet I don't see any wet spots, if I push the insulation away I can see the wet ceiling board, but the insulation isn't really wet and there's no signs of where it's running down from and dripping from.

There were also a a spots where the insulation was contacting the roof at the edge of the house, directly above where the leaks appear. I thought perhaps moisture was being wicked down. I've moved the insulation so that it doesn't contact, but again it wasn't wet indicating that it was the source of the leak.

How do I figure out what needs fixing here?

All the advice so far about ice damns is valid. However, if there are no dams or visible water on the roof, then you will need to crawl up in the attic and start looking for the wet areas that are wicking into your ceiling. The insulation may have been soaked before you got a chance to clear the roof. Obviously if wet insulation is found, it must be removed. Another problem I have come across in a few situations like yours, no dam, but slow moisture stains keep developing, came from improperly installed "proper vent" from the soffit vents to the air space in the attic. In a few cases, the open upper end of the proper vent was blocked or covered with insulation and condensation formed on the top side of the drywall right along the wall. In a couple of cases, no venting was used from the soffit and insulation was packed into this area instead. In either case, you will have to get up there and move the insulation in the affected areas and look for the moisture. Also look for any tell-tale water stains on the rafters or trusses that may have been a leak from above.

Is it all along an exterior wall? If so, it might be a sign of ice dams. You won't see obvious signs, other than wet spots if you were to look at the underside of the roof.

It's possible that a blocked roof-vent might contribute, if the attic warms up and can't escape. (I'm assuming that you have a cold attic, where the floor of the attic is insulated, not the roof line). I'd try to get the insulation away from the roof-line, especially if you have soffit vents. You may be able to just pull back the insulation and install an insulation baffle, but you may have to trim back the insulation so you're not compressing it too much. (compressed insulation == no trapped air == bad R factor)

You said the roof was cleared off, but take a look right where the exterior wall of the house hits the overhang -- as it's a single story, you might be able to see without a ladder, but I'd take a broom and sweep off the snow, and see if there's ice-buildup. If so, that's likely the culprit.

It's also possible that as you went up on the roof on Christmas day that you've damaged the roof, but then it'd most likely be localized in a spot or two, and not as likely to be along a whole external wall.

While it's probably much more likely you do have a leak somewhere, you may consider checking the humidity inside your house as well.

If there's significant moisture in the air, it's possible that it's simply condensing on the coldest surfaces it can find. The corners are going to naturally be those spots.

You would certainly have significant condensation (which you also mentioned) on your windows if this is your cause.

Not the answer you're looking for? Browse other questions tagged water roof leak or ask your own question.

1
How do I avoid condensation issues with an insulated garage roof?
2
How do I approach new water stains on my ceiling?
3
Possible source of dripping from bathroom exhaust fan?
0
Why is there water dripping through my soffits?
0
Horizontal lines on ceiling, roof leaking
1
Determine source of water leak