I plan on talking with an architect soon, but wanted feedback from this community too. Please see the attached photo. I'm in Raleigh, NC and am using information from this site (http://www.totalconstructionhelp.com/joists.html) to make the assumptions that the beams used below would work.

My goal would be to have only the center wall being a load bearing interior wall. The biggest question mark I have is the beams which are 3 2x12's with 1/2" play between them to hang the 2x8x16s from. I think the others according to the table should have no problem supporting the ceiling. 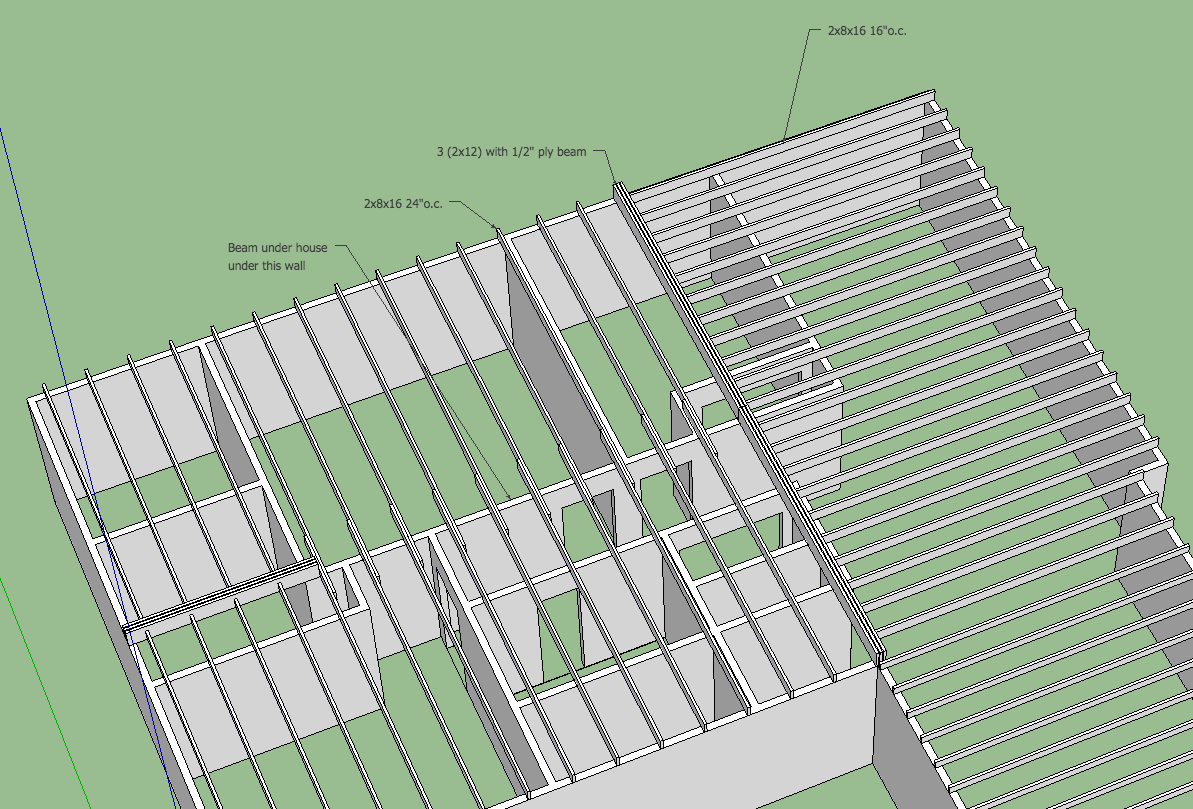 So I think I might update it to the following structure. I've not really researched a whole lot, but it seems logical. Here is the new plan. The change is on the left using a similar beam structure as on the right with 12' 2x8's spaced 16"o.c. This takes the middle joists to be a little closer than 24"o.c. I also have the framing for the attic stairs and a vaulted ceiling in the bathroom. What do you think? 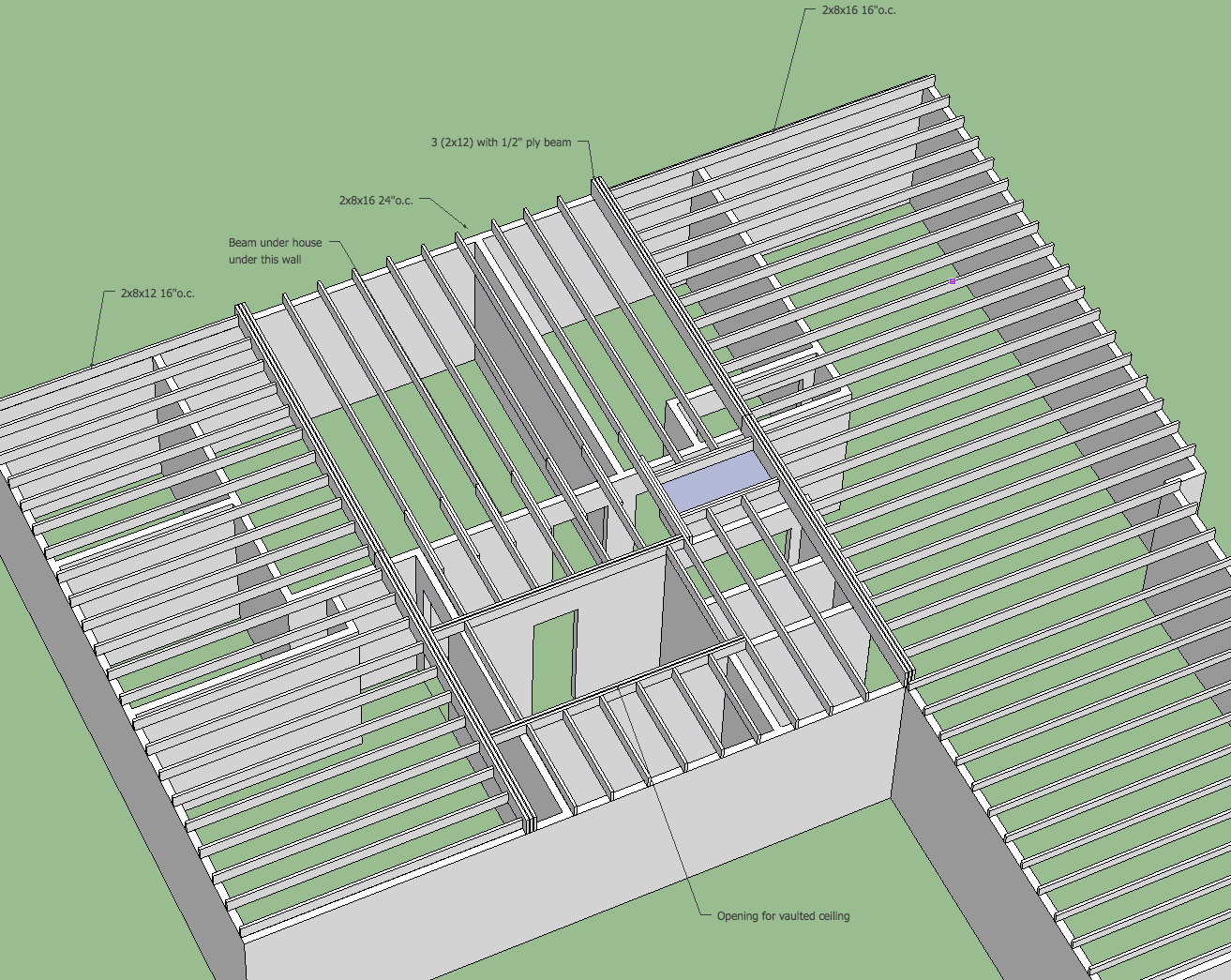 And finally here is the roof structure. It is a hip roof with a gable on the front. I had two contractors say that the roof is supporting itself and other than ceiling joists tying the walls together the roof has no other supports to the ceiling or walls in the house. 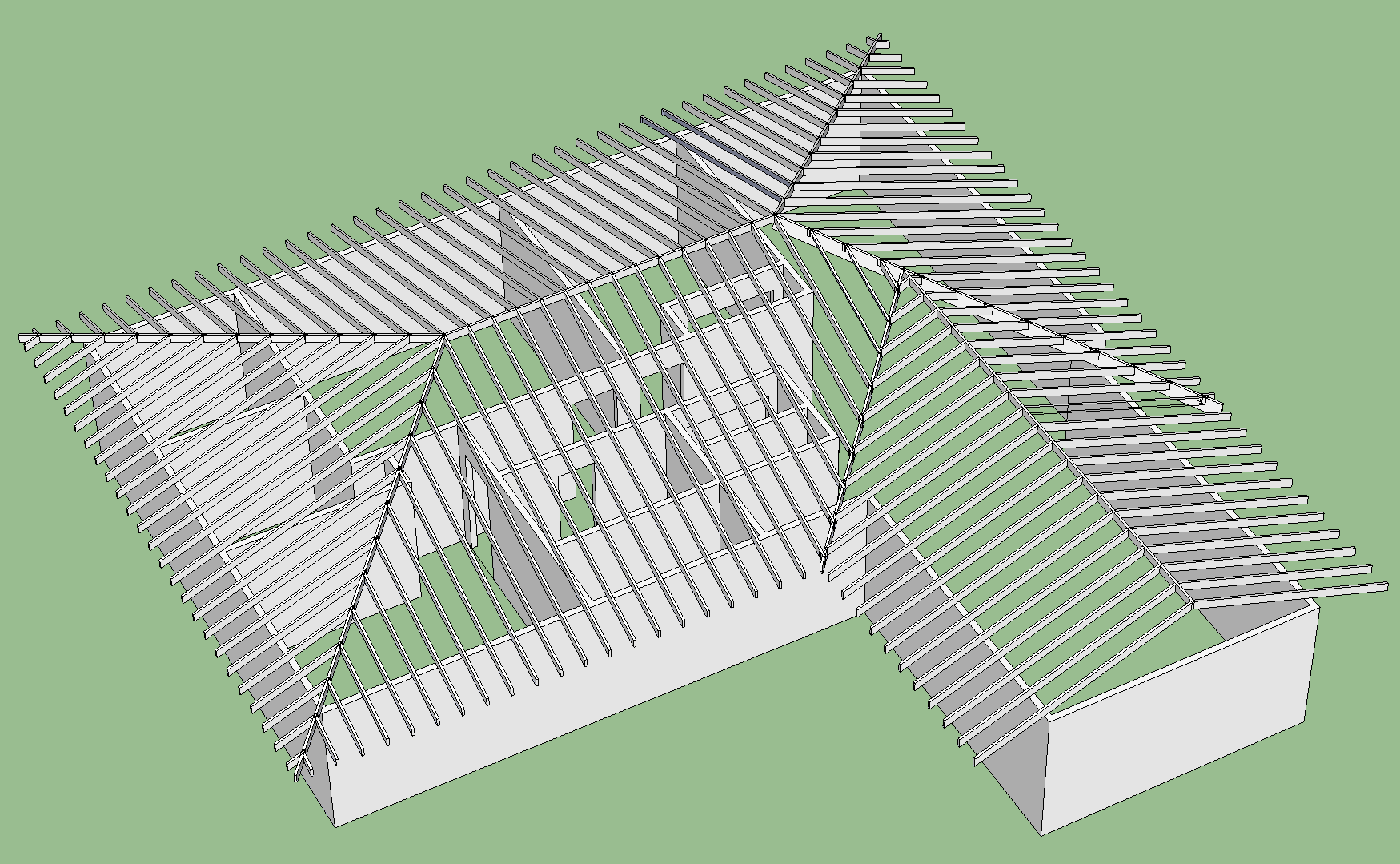 The roof framing really helped. Since according to the code book, you can have limited storage in the attic with the framing you specified, I would still tie all the framing with a layer of subfloor, which in turn can be used as storage. This is because the hips will exert an outward force to the outside bearing walls. There may not be a real issue with this since everything is tied back to a triple beam and tied to an interior wall as well. I would still run plywood in the attic anyway. It will make a great work surface while framing the roof too. This will mean the beams will need to be made of 2X8s or LVL's, this is engineered lumber that measures 1 3/4"X7 1/4"X any length you need. IMHO, the 2X12 beams are way much bigger than they need to be. There simply is not that much live load for them to carry. The wall that is under the ends of the joists that are near this beam can have a beam under it, to help carry what little load (stored items) it may need to support.

You may want to consider adding a beam at the other areas where the rafters will cross over the ceiling joists, so that short joists can be tied to the rafters like the rest of the house. Another alternative is running the beam at the ceiling level the same as the hip rafters. LVLs will help here too. This would eliminate the long one that goes all the way across.

The only 2 issues that I see is where the vaulted ceiling will be and the access. The possible plywood floor may eliminate the need for the joists to tie through. The other is the lack of collar ties. they in essence help break the span of the rafters, since one rafter when loaded will try to push against the other, but the other is trying to do the same. Purlins with knee braces may do the same also, but they will bear on the ceiling joists, may not be a good idea.

That I know of bridging is not required in ceiling framing, although it could be added. A final note on the access and vaulted ceiling, the code used to require ceiling joists at 32" OC (joists on every other rafter) for conventional framed roof as a minimum. With the engineers blessing he may allow the openings with the plywood deck around it to pass.

A little over sight on my part. There will be room needed for the insulation, so the plywood deck will need to be high enough, depending on your climate zone to get anywhere from R-30 to R-49 to be run under it without compressing it. So, 2X12 beams will work with an overbuild the get the 2X8s to the same height with 2X4s that won't work nowhere else, crooked, twisted, cut too short, what have you.

The first thing i notice is that there is no means of egress on the exerior walls, therefore you may be missing a number of load points that may be required in your design. The aforementioned bridging are mitre cut two by two's c placed vertically between the joists to prevent deflection of the joists and help prevent drywall cracksl The areas of concern here are the bedrooms,kitchen and living room. Good call on the strapping jack. I would personally install one by three strapping on the underside of the joists throughout the house and shim them for a better drywall finish. The addition of joist hangers at the beams should also help any separation issues with roof loads, snow loads and live loads. The rafter design sounds a little scary considering it snows down there. I hope you plan on erecting walls in the attic/storage area. Aside from these issues it's a nice design.

Not the answer you're looking for? Browse other questions tagged ceiling joists structural or ask your own question.

4
How far can I move ceiling joists up?
0
How much space do I need between rafter ties?
1
Can I use a 2x8 for a ceiling joist and rafters on a 16' span?
7
Increase size of ceiling joist compromise roof strength?
0
Can I Move Interior Load-Bearing Walls Without Changes/Additions to Beams/Piers/Foundation?
0
Is there space between plaster ceiling lath and joists?
1
Is it safe to remove this plywood ceiling and ceiling joists?
4
How to repair this split ceiling joist?