How to prepare for a home service call from my DSL provider?

My DSL internet connection has been very unreliable and slow recently. I called my service provider this morning and they told me that they will be sending someone to my home this weekend to fix it.

They told me that he would be inspecting the hardware between my home and their office, and if no problem is found there, they said that he will be checking the wiring inside my house. In the case that the problem is found in the home, I'm told that I'm looking at a minimum 85 USD charge.

I would like to know how to make the most of this service call.

Is there anything I should be checking in my home or researching prior to the service call? Are there certain questions I should be asking or certain information I should provide to the technician to have the best chance of getting this fixed?

Let me provide some more details about the problem I'm trying to solve.

My home is a two-story house with a basement in the suburbs of Denver, Colorado, USA. I've had no trouble with any of the utilities since moving in about 40 days ago. I am paying for 20 Mbps service from Century Link.

A few weeks ago, I had a similar problem. The technician told me that his computer indicated that my modem didn't have a good connection. The problem seemed to be fixed when we tried connecting the modem to a different phone jack. However, the problem came back today. They said that they were going to do something on their end, but whatever they did actually made it worse!

Since all the telephone companies were deregulated, the practice is to have a demarcation point (which I'm really surprised no one else has mentioned yet). Most homes built within the last 20 years or so will have one, which will be a box or jack (often marked "DEMARC") marking the change in responsibility between their network and your in-house wiring. 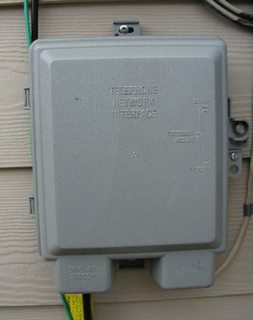 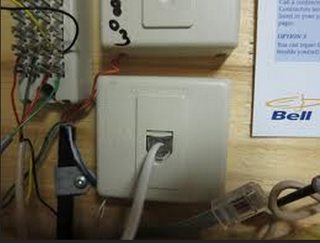 Presumably, being a DIY site, you'd like to avoid being charged $85+ for something you can fix yourself, so there are really two steps to take:

Connect your modem to the demarc

Best thing to do is disconnect all your house wiring from the demarc (usually it plugs in) and connect your modem to it, then run speed tests or whatever else. You may also want to try a different cable just to eliminate that.

If you still have the problem, then it's either a problem with the wiring before the demarc, or your modem (both of which are the company's responsibility), or something on your PC/router (which they'll charge you for, and off-topic for this site).

If your Demarc is outside, you'll have to be a bit more creative, but at least you can just have one jack connected at a time (see the in-house wiring bit below).

If you have a wire that comes in and is directly hardwired to the house wiring, I'd suggest cutting it off and putting a demarc jack in (like the second picture).

Use a second jack to hardwire the rest of your house to, then a regular station cord to patch between the two. This also lets you disconnect the patch cable in order to do work on in-house wiring without worrying about shorting anything out or shocking yourself.

If it's working at the demarc, the you've isolated the problem to the house. This could be much harder to diagnose.

If you have the same number of wires as jacks, then you have centralized wiring. If not, you probably have a harder-to-diagnose mess.

If you're lucky, each jack will have its own cord coming back to a central location, where they'll probably all be connected together. Detach all but the one you're using (this may take some trial and error) and try the modem there. If it works, then there's a fault in another wire and you can isolate that one-by-one, or just leave it disconnected. Repeat for another jack or two in the house.

Technically for phones to work, the ring and tip wires just need to be connected in parallel. Many times the jacks are all or partially daisy-chained, or even worse, there are junction points hidden in the walls, in whatever way works to make the shortest wiring possible. One of the problems with this is if there's a fault, it's extremely hard to find.

You pretty much have to follow the same steps -- trying to isolate lines -- but you'll have to disconnect wiring in the boxes around the house (and hope there are no hidden junctions). It may be simpler to just run a new jack and new wiring from the demarc to the spot you need, and leave everything else disconnected.

Not much you can do other than make it easy on the technician to access all of your phone jacks, POTS runs, and where it enters the house.

In my experience, however, the problem is likely on their end.

If you want to test it yourself, find the line closest to the point it comes in to your house (the point just after it leaves the Century Link Box) and wire a jack there and plug in your modem. If that fixes the problem, then you can assume it is on your end and you might as well fix that yourself if you don't want to pay their hourly.

Also note that other devices plugged into the land-line can interfere with your DSL. So also make sure every other device is unplugged and test your DSL connection again.

Well not to get into DSL troubleshooting but might as well throw this out first:

As a home owner I would do the following:

Bottom line is unless you changed their equipment in your home since install they should fix it for free. You are a new account and they did not run the proper tests to make sure you were working correctly or they have bugs in their network. And sometimes these bugs are fixed with rewiring the house or adding new equipment or shutting down unused lines properly. But unless you did something to their stuff it shouldn't be on you.

Not the answer you're looking for? Browse other questions tagged wiring telephone utilities or ask your own question.

5
How do I find out what's wrong with my phone (DSL) line?
3
What are my options for hiding/removing service panels from the outside of a house?
1
splicing a 25 pair telephone riser
0
Changing out programmable Light Switch, wire help needed!
2
Wiring Leading to DSL Problems
0
Upgrade Electric Service from 100A to 200A
1
Telephone Termination Block upgrade
2
How bad is using a 200 amp breaker box on a mobile home that only has 100 amp underground wire?
3
Intermittent power outtages to only part of the house. Power can be restored by turning the stove on for just a second, then turning it off