How do I update two 2-wire switches housed in a single box? Both switches are combination switch and PILOT light

I have a very OLD wiring so it isn't clear how to install my new switch per the provided wiring diagram.

I have 2 COMBINATION SWITCHES, each has a switch and a pilot light on them housed in a single junction box. The old switches are brown, I want to replace them with white switches. 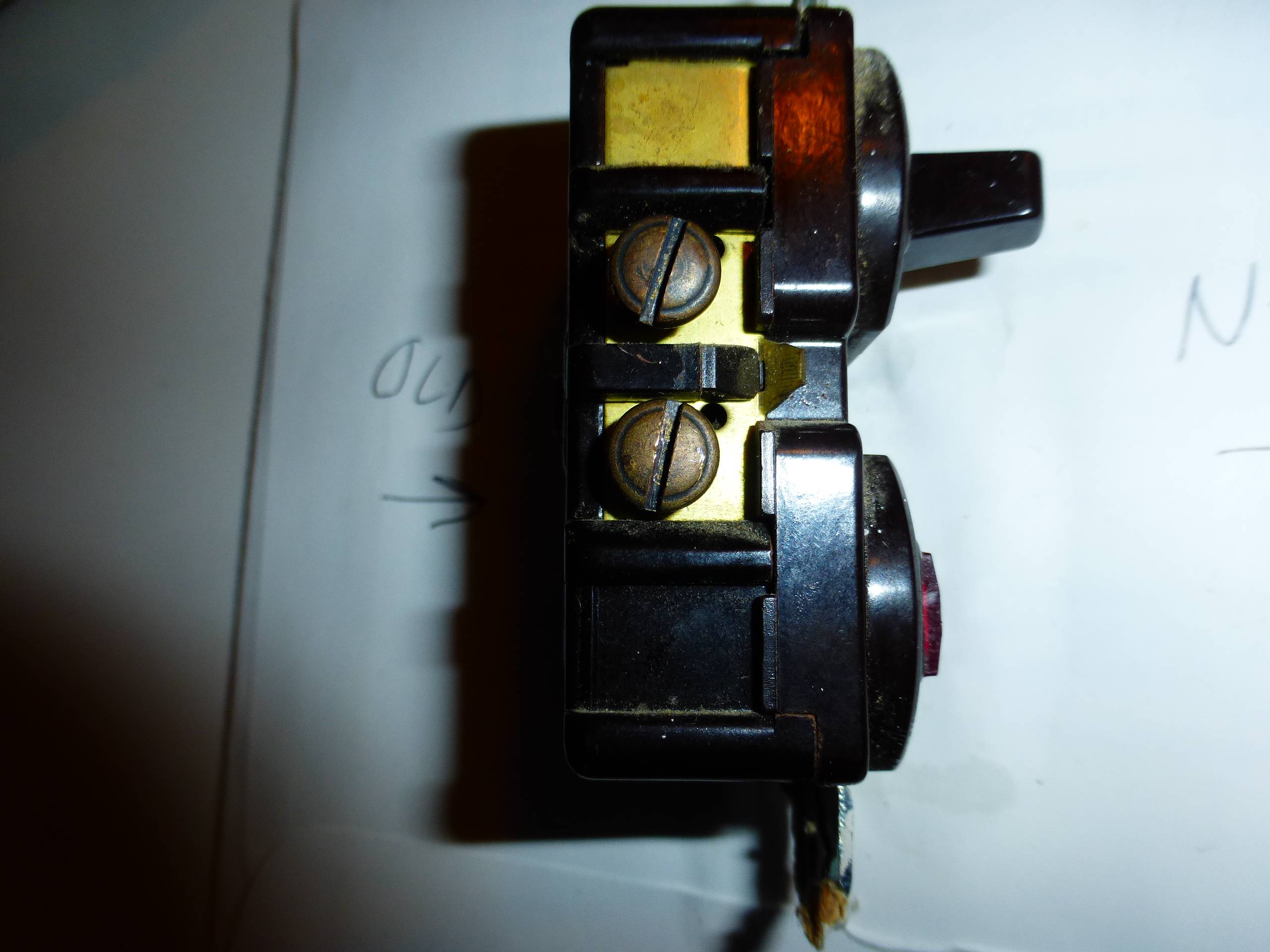 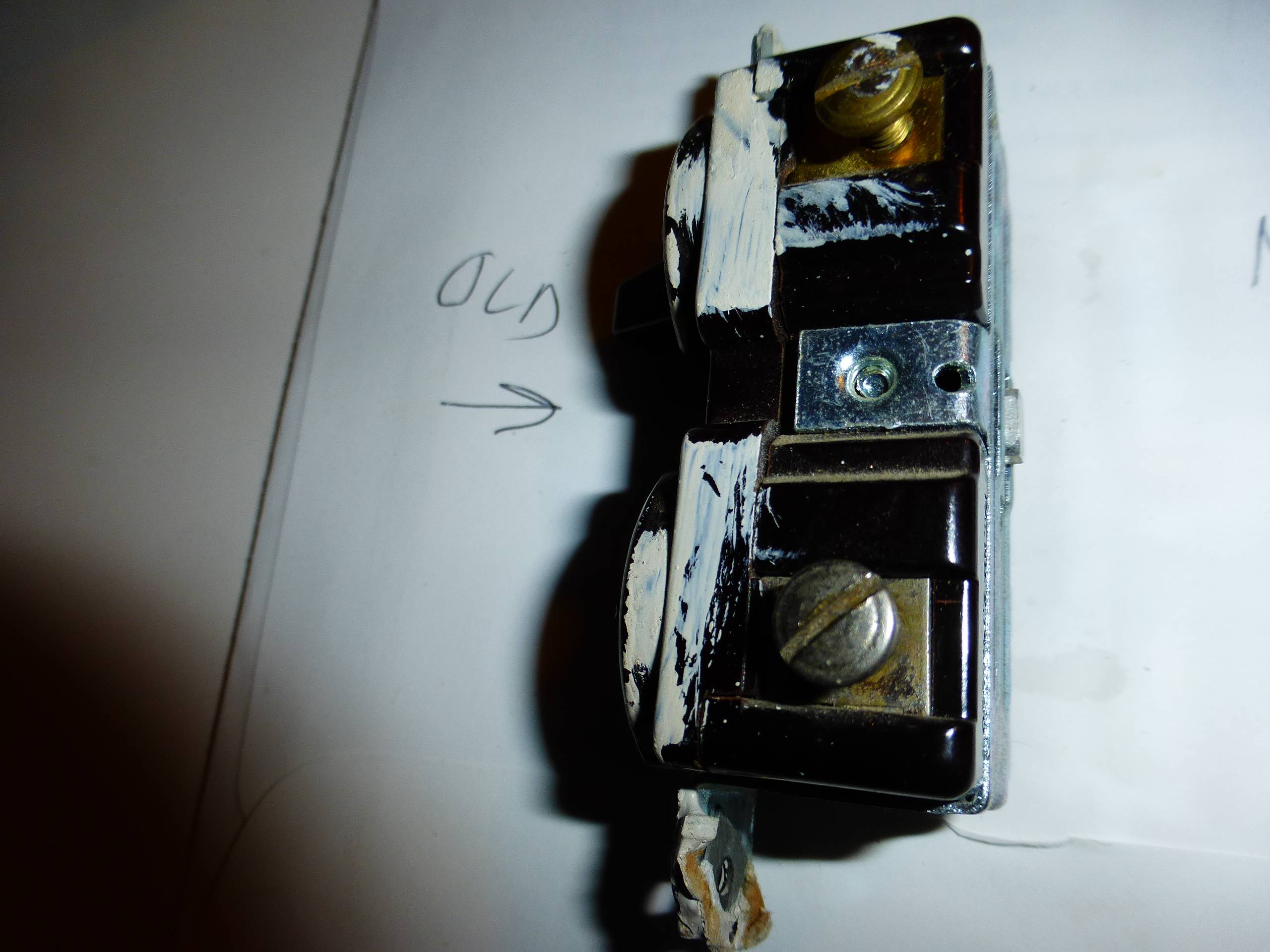 The old switches were wired with 3 wires, black, white, plain copper. I don't know that the plain cooper was to a ground screw or not. In the old switch the copper wire was attached to a screw that WAS NOT GREEN but was a single screw on the right side of the old switch.

I wired the 1st new replacement switch as follows:

I replaced the first old switch as above in 1, 2, 3 with the new switch. Turned on power, switch worked as expected (pilot shows on when the switch is on, pilot off when switch off).

Then I replace the 2nd switch exactly at the first and it tripped the circuit breaker.

How do I wire using the 3 existing wires (Black, White, Copper) to the new 2nd switch in order without causing the circuit breaker to trip when it is used?

It sounds like the old switches were hooked up using the bare copper grounding conductor as a grounded (neutral) conductor. This is NOT the proper way to wire this switch. To wire the new switches properly, you'll have to install an additional wire between the switch and the load. 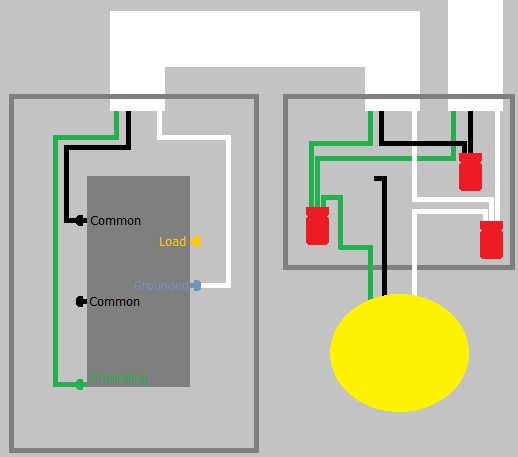 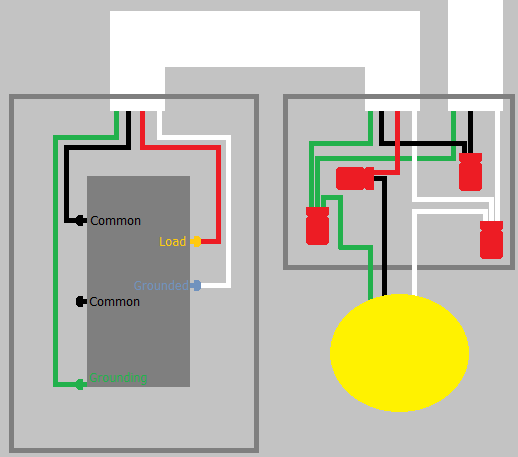 The device you're trying to install has 5 screw terminals. On one side it has 2 COMMON terminals, which are likely either black or brass in color. This side also contains the GROUNDING terminal, which is likely green and located kind of off by itself.

On the other side of the device, there are two screw terminals. The first is the LOAD terminal, and is likely brass in color. The other terminal is the GROUNDED (neutral) terminal, and is probably silver in color.

The COMMON terminals are used to supply power to the device. It's typical for only one of the terminals to be connected, but possible that both can be used.

The GROUNDING terminal is used to connect the device to the equipment grounding system.

The LOAD terminal is used to supply power from the switch, to the light or other load that is being controlled by the switch.

The GROUNDED terminal is used to complete the circuit so the pilot light can be illuminated. 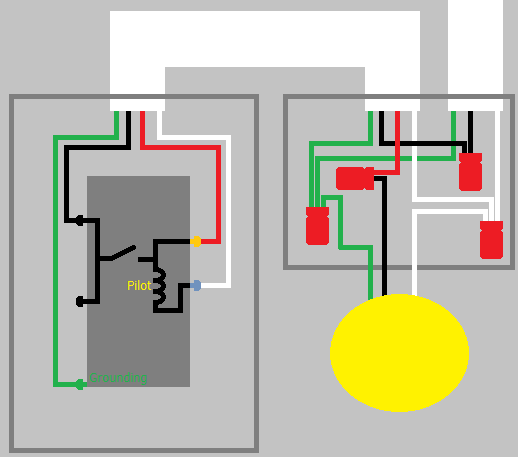 I'm not sure what caused your breaker to trip; I'd need more details about exactly how you wired thing. (If you could upload a pic of what tripped the circut, and of the old switch that would help a lot.)

I can't imagine someone using deciding to use the bare copper wire as the hot, or to carry the load, so would feel safe to assume it's properly wired as a ground and connect it to your green screw.

Further, it sounds like your current wiring set-up doesn't distinguish between the load and a direct connection to neutral. As long as you aren't using CFLs this is probably fine. Thus, you likely want to run a jumper between them. Going by the figure in step 4 you can attach a short wire between A1 and B1 (the brass and silver screws).

This leaves you with two possible configurations white to 'common' and black to 'A1' or vice versa. Both was may work to complete the circuit, but I'd start with white to common.

7
How do I install a single-pole switch w/ pilot light?
2
How do I install an insteon light switch where wire colors don't match?
2
How to wire/replace this bathroom light switch?
0
How to wire a smart switch - 2 gang switch box?
1
Replacing Single switch with timer switch - Original two switches connected
0
How do I wire my ceiling fan with two switches (one for lights the other for fan)?
2
Two wall switches and remote ceiling fan/light questions
1
How should I wire / connect a new ceiling light to this ceiling junction box?
1
How to wire two switches to control bathroom fan/light combo (only two 12/2 cables in receptacle)?