I realise that this may well be beyond the scope of an SE site, but I'll give it a go nonetheless.

We've recently had a leaky pressure release valve on our Megaflo hot water tank. We have no boiler as such, all hot water is generated by two immersion heaters (on/off peak).

We reported the leak to the building maintenance company (our flat is rented), and after significant scheduling issues which I won't go into here, the valve was replaced last night. The engineer (I use the term loosely) fitted the new valve, tested it by checking for leaks and manually turning the valve, and left.

I then went to run hot water, only to get nothing at all (not even cold water) from the hot side of any of our taps (we only have mixers, one in the kitchen, bathroom and bath/shower combo).

Called the out-of-hours support guys out, only to be told (by two separate engineers no less) that the valve had been fitted the wrong way around, but they cannot fix the problem (and that they're not technically qualified to even diagnose it officially) because they don't carry the UK G3 certificate to work on our type of boiler (unvented?). My questions are:

Photos of the plumbing layout as left by the engineer are below - I've numbered the pipes to give context across photos. 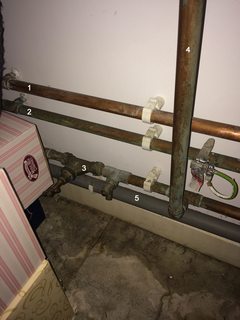 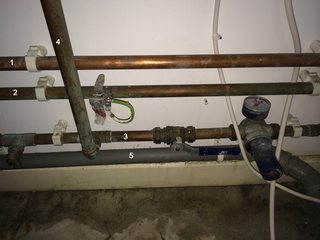 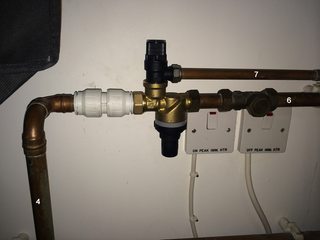 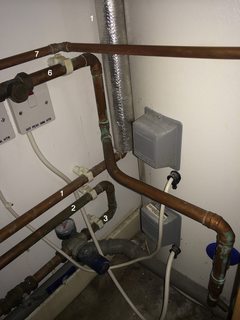 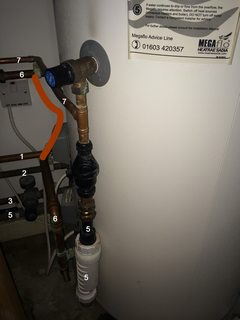 I should point out that the crude line on the last photo is for context, the pipe curves behind the tank.

In your third picture, you can see a small arrow pointing to the left. That's the direction the water will flow through that valve. It likely has a check valve incorporated which will prevent water from flowing backwards. I don't believe this setup is dangerous since excessive water pressure will be backfeed into the cold water lines, and if those exceed the normal pressure levels it will go out the pressure release valve.

Not the answer you're looking for? Browse other questions tagged plumbing valve hot-water or ask your own question.

1
Is it safe to not have a safety cutoff on an immersion heater?
1
Radiators don't heat up evenly, and am missing an Expansion Vessel. Do I need it?
1
What problems could be caused by putting mains water in to the pipe from a shared water tank?
1
Electric water boiler .. how is the system supposed to work? (UK)
1
Toilet water valve tightened to OFF position but water keeps filling up tank
3
Replacing a well pressure tank
0
Hot water tank cold water is always flowing
1
Do I need a mixing valve in my boiler/water heater system?
2
Hot water heating recommendation