Did I use my light fixture's ground wire correctly?

I took down an old ceiling fan in my home, and replaced it with a basic light fixture.

When I took the fan down, I saw the normal white and black wires, but no ground coming out off the ceiling.

The only ground was a wire screwed to the metal ceiling box and then the other end attached/wrapped up in the white wire's connector cap. In addition to the cap, they were also electrical taped together.

One, does that seem right?

Two, and I guess more importantly, the instructions for the new light fixture said to take the included ground wire from the new fixture and wrap it around the ground screw(which is screwed into the included bracket) and then attach the end to the ceiling box's ground wire.

Well, I cannot use the metal ceiling box that was being used with the ceiling fan. I can only use the bracket, which is currently screwed into place, right into the "hole" in the ceiling.

Everything is installed and up, working fine, but my biggest question is how the ground wire works. Is it supposed to have a shared current going through it from the white wire?

I'm currently using the included ground wire from the base of the light fixture, and that goes up and it's wrapped/attached to the ground screw on the bracket.

That to me doesn't seem like it would help anything at all. Would it? Did I do something wrong? 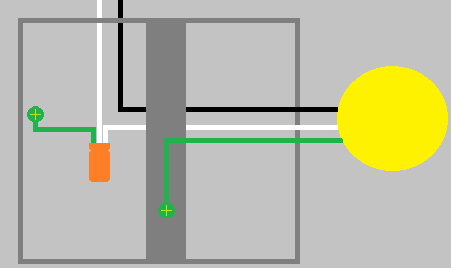 If this is indeed what you've encountered, you should remove the grounding conductor from the twist-on wire connector used to connect the white wires. 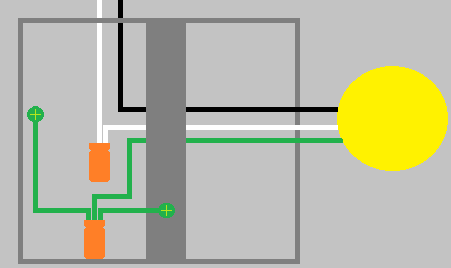 The only place grounded (neutral) conductors and grounding conductors should be bonded (connected), is at the main service disconnect.

This sentence also has me concerned...

I cannot use the metal ceiling box that was being used with the ceiling fan. I can only use the bracket, which is currently screwed into place, right into the "hole" in the ceiling.

Are you saying that the new light fixture is not installed in an electrical box?

If this is the case, you should correct that issue as well. All electrical connections must be made inside an approved, listed and labeled enclosure.

It is incorrect to connect the white wire to any sort of case, metal box, or ground wire. Period.

There is likely no actual ground in this box. The proper thing to do is to connect the fixture's ground wire to the metal box or bracket and be done with it (there may be no actual ground).

You should also consider sealing the the hole to prevent energy loss via airflow.

As is often the case on DIY, a photo would help a lot, as would age of home and jurisdiction.

What is the purpose of a ground? It's a path for electrical current to take, should there be a flaw in the electric fixture. Without a ground, if there is a flaw, the case of the (fan, fixture) can be energized and the next person to touch it can get a shock. Work with your older fixtures only when off, and don't lick your ceiling lamps, and you'll be fine.

There's no need to worry in a retrofit about grounding a ceiling fixture.

Not the answer you're looking for? Browse other questions tagged electrical light-fixture grounding-and-bonding or ask your own question.

10
How should I connect the ground wire for my light fixture?
6
Can I safely ground a light fixture if the ceiling box has two hot and one neutral wire (no ground wire)
1
How do I wire a new ceiling light with power to the ceiling and 3-way switches?
1
Did I wire my light fixture correctly?
3
How do I ground my replacement outside porch light?
2
How do I properly ground a light fixture?
0
Trying to install Cooper surface LED down light to ceiling but don't see a ground wire
1
Replacing ceiling fan with regular light and new fixture won't shut off
1
How do I connect light fixture’s ground to supply wires?
1
Ceiling fan with light - electrical box has two cables, one with a red wire