How effective are outdoor foam faucet covers to prevent freezing?

Everyone seems to suggest using those styrofoam faucet covers to help prevent the pipes associated with the fixture from freezing. 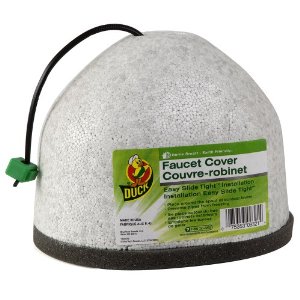 They're cheap so I have them anyway (plus I'm not in a hard freeze area), but I'm skeptical about how much protection those things provide.

I'm wondering if anyone has some actual numbers?

I live in Canada and there are only two ways to stop your spigot from freezing in the winter. The first is to have a cut off inside your house, lower then the spigot and it has to have a relief valve on the exterior side to drain the water away from the wall. The other way is a frost spigot that extends about 20" into the warm zone on the inside of the wall. This actually has the shut-off all the way into the house. These have to be installed with a slope towards the faucet end so when you close it the water drains out the spigot.

Those are the only two ways to truly and confidently stop your hose spigots from freezing.

This seems a bit gimmicky to me. Insulation is not 100% effective, so if no heat is added to the system the inside temperature will eventually be equal to the outside temperature. This might work for an overnight frost, but I wouldn't rely on it for an entire winter (especially a cold northern one).

If you live in a climate where temperatures rarely dip below freezing, this might be worth it. If you live in the frozen north, you might use this to keep your giblets warm while you snowblow, but that's about it.

If you're really worried about the faucet freezing.

I have lived in Texas and Louisiana for over 60 years where freezing temperatures are relatively rare but I have seen temps as low as 14 degrees and that was during a week where the high daytime temperatures never got above freezing. Also I am a Chemical Engineer which is mainly heat transfer and material handling.

Commercial covers are typically effective for temperatures down to 25 degrees F with above freezing temps during the day. For 23 degs and below additional measures are necessary. What I do is use some cheap Styrofoam coolers and place the bottom of the cooler over the water bib and commercial cover and then brace against the wall as tight as possible with something. This more than doubles the insulating value of just the commercial cover with the additional benefit of trapping a large bubble of air between the cooler bottom and the commercial cover and now you have two air chambers to add to the insulation value. Air if contained and still is the best insulator of all - much better than the Styrofoam alone. Only a vacuum is better.

Now the guy who put a small incandescent bulb under the cover should be good for just about anything. Most of use can't do that.

As far as how long the insulation can keep pipes and bibs from freezing, that depends on many factors, primarily - the quality of the foam - the lower density of the foam the better as long as you have the structural strength to hold its shape - the quality of the seal to the wall - any air leakage bypasses the foam insulation and that is bad - how much heat is leaking through the wall - most homes in the south are not insulated as well houses in the cooler areas so we get a small but appreciable amount of heat through the outside walls which helps.

The advantages I see in covering a commercial cover with the bottom of foam cooler is that you get more thickness of foam over all and you have two trapped air pockets and with the cooler you cover a much larger area of the outside wall and therefore get more heat from the house.

However except for the heat you get through the wall of the house everything is passive insulation which while it can effectively slow down heat loss it cannot prevent it so if it stays cold enough, long enough your faucets will eventually freeze. Where I live that limit is at least as low as 20 degrees over night with the double covered faucets.

After that you have only three options

Options 2 and 3 require a lot of work ahead of time but if you are caught with an unexpected freeze you best bets are insulating covers and double covers.

One last options people used to do is drip the faucet so it does not freeze. There are number of problems with that - if everyone does that the area water pressure may be so low that for all effective purposes you loose your water supply - if you don't drip enough, the drips will freeze and then faucet, especially a problem if more people start dripping during the night and the pressure falls. - even if the dripping does not freeze, you may find a small mountain of ice under the faucet in the morning and in one case I personally saw the ice actually grew up to the faucet and restricted the flow enough to cause the drip to stop and freeze the faucet.

Dripping is better than nothing but is probably to be used only as last resort.

If you don't have a commercial faucet cover or a foam cooler, use lots rags/cloth and tape and then put a plastic bag/box over it and tape it tight against the wall - trapping air and isolating precipitation from the rags.

One last note about freeze damage of pipes and faucets. Water freezing is not the problem. The problem is unlike most other solids which shrink the colder they get, water shrinks from about 32 deg F and then around 28 degrees starts to expand. The expansion is what causes the damage. In most cases even if the temperature gets to 28 degrees and the pipes freeze it almost always does no damage. The damage is typically done when the pipes get below 28 degrees. So freezing temperatures is something not to panic about, but the hard freezes below 28 degrees are.

They work well in the South where freeze-resistant spigots aren't standard and temperatures don't get far below freezing for very long. The insulated cover retains heat from the daytime sun and slows the escape of heat from the building through the spigot, keeping it above the freezing point overnight. I take the additional step of wrapping the spigot with an old wool sock for additional insulation before installing the foam cover.

They help. Last frozen spigot issue I dealt with was with a "frost-poof sillcock" (the long faucet that has the valve on the inside) and it probably would not have frozen if it had one of these on it. 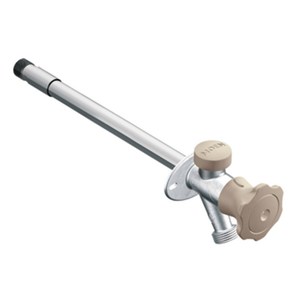 Those are supposed to work on the principle that the valve and water are on the inside of the building, but in very cold weather the exterior part still gets cold, and the exterior cold conducting in along the metal pipe exceeded the interior heat conducting out, so the pipe attached to it (on the inside, beyond the valve) froze anyway.

One of these covers significantly reduces the rate at which the outside part conducts cold, so it can tip the balance. If you prefer, it reduces the rate of heat loss from the outside faucet, retaining more of the heat conducted from inside along the pipe (same thing, said differently.) Heat comes from the inside of the building being heated in winter.

I fixed that one by the traditional method from before "frost-proof sillcocks" (perhaps better referred to as "frost-resistant") of putting a valve with drain further back along the plumbing. Both methods require someone to remember to do something with the faucets before winter, which can be a problem.

Since I live in Texas, we don't get sub-zero temps very often. But during a severe winter, I wrap the faucets with insulating spun-glass strip, then put the cover over it. Never had a frozen faucet since. Lived in Amarillo TX for a year or so, Used the same method. Amarillo has high speed FREEZING winds & low Temps. No problem there either.

The one time I had a problem with frozen pipes, it occurred inside the wall itself, approx 2 feet above the faucet. In this case, insulating the faucet would have been of no help whatsoever. I resolved the problem by:

Since those two steps, I've had no further problems with pipes freezing.

I live in Northern VA, so this info may not be applicable to places with more extreme winters. Hope this helps anyway, though.

I have a faucet inside the garage that is frozen. It's a standard spigot and I can't get to the pipe that feeds it so I can't install a shut off or replace with a freeze proof spigot. My plan it to use one of these covers along with a 7 watt night light inside. I may put a tin can inside as well. Maybe this idea will help someone else.

Not the answer you're looking for? Browse other questions tagged plumbing insulation or ask your own question.

25
Is there a freezing-water-resistant metal pipe?

4
How can I prevent a faucet retaining nut from freezing to a steel washer?
13
Are curtains effective for keeping the room warm?
3
How can I isolate an indoor water pipe to prevent freezing?
1
How to fix leaky outdoor faucet
0
Are there insulated covers available for attic fans?
1
Is tape an effective way to hold on a foam elbow?
0
Is insulating suspended floor void with spray foam effective in reducing noise?
4
How to prevent water line to washer from freezing this winter