In my case, the light switch I want to convert/replace has four wires. Two black wires. Two white wires. There appears to be a couple loops of bare copper wire inside the metal box, but currently it does not appear to be connected to the existing switch in any way.

The new Belkin WeMo light switch has four wires of its own. Two black (labeled switch, one with a lightbulb icon, the other with a lightning bolt icon), one white (labeled neutral, with a zero icon), and one green (labeled ground, with the standard icon for ground). 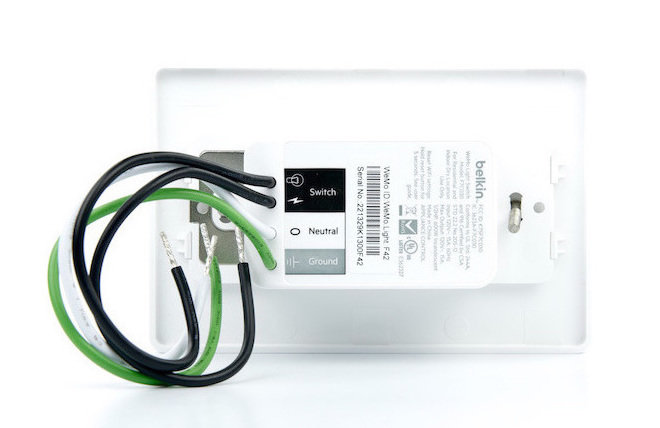 So how might I go about figuring out what wires on the WeMo light switch to connect to what wires currently connected to the existing 3-way switch to pull off this functionality?

Any tricks/hacks that might help me keep the functionality of at least one of the two other three-way switches and have the third WeMo light switch altogether? I do wish Belkin would just come out with a 3-way version already, but until that happens, I guess I'm stuck taking this route if I want the WeMo capabilities (and I do).

The WeMo light switch is a simple on and off switch (as far as your electrical system is concerned; yes, I know it does more). It allows a circuit to be on or off, based on whether that switch is on or off, period.

On the second three way switch (B), closer to the light or other device, the power comes in on one of the two travelers and leaves the switch via the common if and only if the switch is thrown to the same traveler as switch A.

For three way switches, there is no on or off position. Rather there is traveler 1 and traveler 2 positions (not labeled that way but called that for illustration). The circuit is on when both switches are turned to the same traveler and off when they are turned to different travelers.

WeMo effectively interrupts or connects the power either before or after it goes through the three way setup. However, If it three way pair is off (the swithces are not turned to the same traveler), then the circuit will stay of, regardless of the WeMo setting.

Whether this works for you depends on whether you are willing to be sure to turn the three way setup to on before you leave and then control the system with the WeMo.

The existing switch you are describing does not sound like a three way, but a four way. This is a switch used between two three ways to give an additional location to switch a circuit on and off. (The white wires are actually being used as hot lines and should have been marked with black tape or a black marker). This switch cannot be controlled by the WeMo. You need to find the one of the real three ways to make this work.

When you do, connect the wires as follows:

If you are placing the WeMo next to three way A (closer to line voltage):

If you are placing the WeMo next to three way B (closer to fixture):

REMEMBER, the three way setup has to be set so that the circuit is ON for the WeMo to be able to control it remotely. (The four way you have been looking at complicates the circuitry, but you can effectively ignore it; just make sure the overall circuit is ON before you leave; it doesn't matter which switch you flip to turn it on.)

Based on the OP's comment, he or she is willing to lose the 3/4-way functionality and install the WeMo only to control the fixture. That cannot be done by replacing the 4-way switch described because there is no neutral in that box.

There is one way to turn it wemo into a 3/4 way switch.

I have one switch set as a "master" )

At this point you have installed the 1st wemo light switch just as per the instructions.

For the 2ed light switch(or 3rd) These are "slaves"

So the ground wire (green) to the bare copper wire The white wire is connected to the neutral wire (should be white, but it may require switching around some of the wires in each box, more on that later) The 1st black wire, goes to the feed (the black wire supplying the power) And the second back wire is unused. Cap it off.

You may have to make changes to where each wire goes in each electrical box. I had to.

And for a 3 way switch create 2 recipes.

1: when your 2ed "slave" switch is turned on (the if) Then toggle the master switch (the that)

For a 4 way switch

You would need 4 recipes (two per switch)

The only draw back at this point is that there is a delay when using ifttt, about 30 seconds or so.

I'm trying to find someway not to use ifttt, there seem be to some people working on some projects that might be able to use a local server instead.

Well technically you could just add another switch (being the WeMo) with a new hot leg tied directly to the chandelier. And keep you 3/4 way setup. With only one drawback. The WeMo will be god and the 3/4 way will function as normal when the WeMo is off (A good setup if you intend to use WeMo mostly for away mode or alarm mode). You tie the power and neutral in straight from mains line in. And connect the WeMo out (light-bulb) to the chandelier (or the 3 way b common). The WeMo can turn the lights on and off. When the WeMo is on the lights will always be on. When the WeMo is off the lights will be on manual control. Either on or off depending on the last setting.

5
How do I replace a single pole light switch with a programmable timer switch?
2
Replacing light switch with dimmer switch... white wire?
1
Unusual three-way+ light configuration
5
What is the proper way to convert a pair of three-way (SPDT) switches into a single two-way (SPST) switch?
2
Trying to identify neutral wire in switch box to use with Wemo Light switch (more than one neutral wire seems to be present)
4
Can I connect a shared neutral to my Wemo smart light switch?
0
Bypass a three-way switch for the next single pole switch in the same circuit to work on a different light?
0
Wemo Light Switch + Niko Dimmer Switch combined
0
Can you use Wemo Smart Switches Long Press to “Fake” a 3-Way Set Up?