Do I need to remove existing drywall before framing an interior wall?

Below is a rough diagram of the interior wall I'd like to build. The wall is in green, and the rooms are in white. The grey offset around the edges of the walls represents 3/8" drywall.

My question is simple - do I need to remove the drywall where the interior wall will meet the existing framing, or can I just drive framing nails straight through it to pick up the stud on the other side?

What about the top plate? 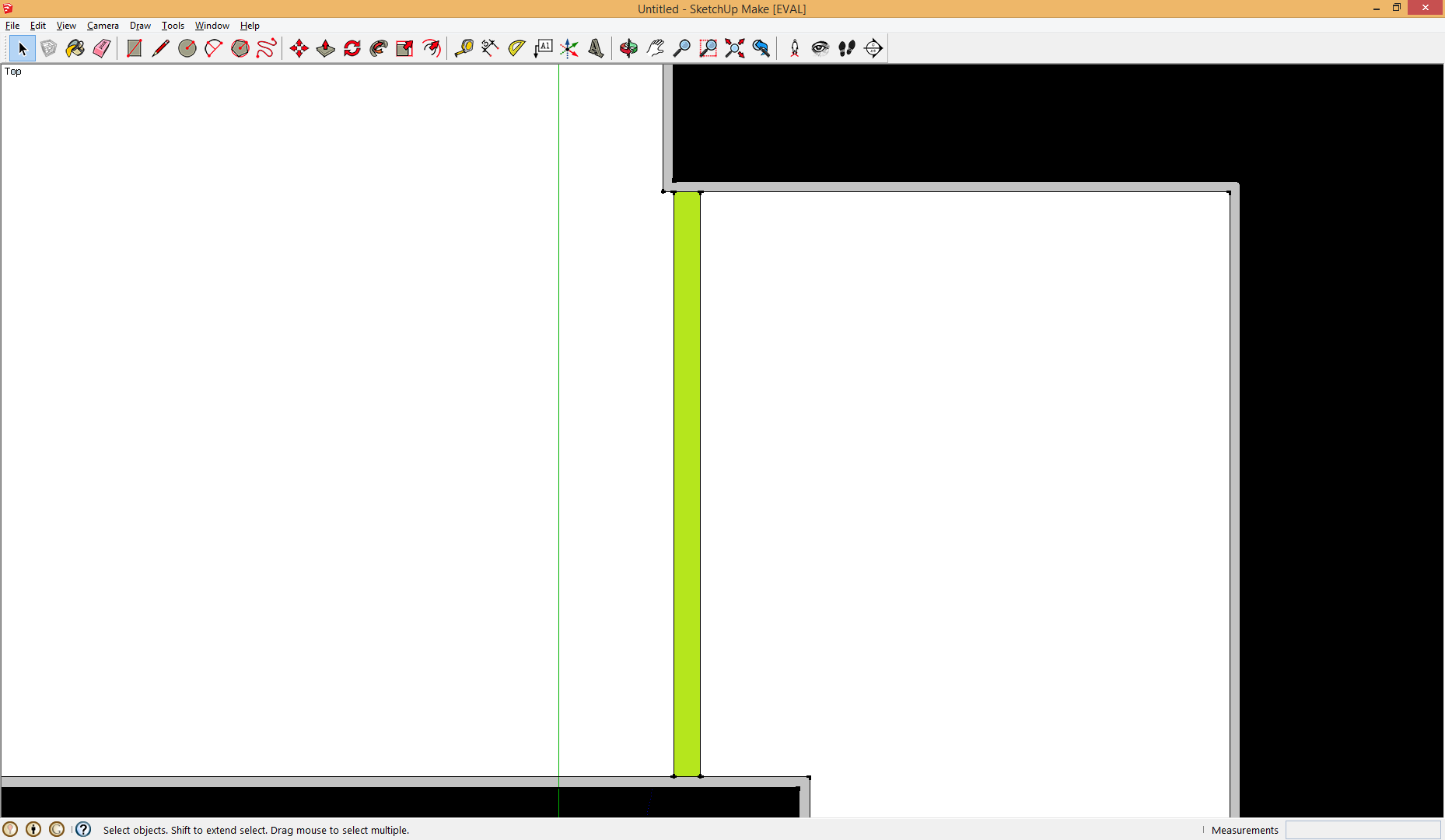 The problem with butting framing up against drywall is that drywall is not very solid. Flexing of the framing can tend to crush and crumble the drywall between the new framing and the old. While this is not a load bearing wall, you do want it solid and stable, especially if you are going to hang any shelving or other moderate loads. Also, if you remove a strip of the old drywall, you can make sure you are attaching the new framing solidly into the old and not driving to close to the edge of a stud.

While you might get away with it, there is little reason to do it. If you insist on going that way, I suggest you use construction grade screws rather than nails. If you use nails, the very process of nailing may increase the likelihood of crushing the drywall underneath and creating a looser joint.

I know you already accepted, but I disagree with @bib on a few points that don't fit in a comment, so I'll provide my own answer.

So long as you build a solid frame and connect it well, once installed there is really no chance of existing drywall being "crushed" by the frame. To crush the connecting drywall after installation, you'd need a very serious lateral force which is enough to flex or shift the frame itself. Since your wall connects at both ends, it would pretty much be impossible to put this lateral force on the new wall.

You of course have to be careful during construction since it is possible to crush what's there now.

Solid construction means using 16d (3 1/2") nails (I prefer spiral to common, or use a pneumatic framing nailer). I'd also connect it into the existing structure using 3 1/2" #8 or #10 screws (not nails). Screws are stronger, and trying to hammer in nails is going to cause that lateral force that may damage the drywall (as @bib suggests).

This includes screwing into the subfloor and ceiling. The subfloor should be plywood, so to prevent it from shifting you can attach anywhere with 2 1/2" screws. The ceiling will just be drywall covering joists; if the joists run perpendicular you should be able to anchor to each one; if they run parallel then if you're lucky there will be one right over top (likely since it's at a corner) and if you're unlucky you'll have to add framing.

There is definitely a stud on the top end of your new wall (since it's a corner) so just be sure to screw into that.

There are, however, a couple things I'd point out regarding the 3/8" drywall you mentioned:

Speaking of drywall, I'd remove the corner bead on the existing outside corner (in your drawing: at the top left of the new wall). This will make it easier to tape and finish the new drywall; you can treat it like a butt joint.

To open or not open drywall

On the bottom of your diagram, if there is no stud, then you have two choices really, and to me it depends on a few things.

If it's an interior wall, it's probably easy enough to just open the wall and add a stud or horizontal framing between existing studs. You can do this on an exterior wall as well, but you additionally have to deal with insulation and vapour barrier.

Attaching a wall to drywall without a stud

If, and only if, you have a solid attachment point in the floor and ceiling (meaning joists) within about 1' of the wall edge, you can avoid opening the drywall.

Use a few zinc drywall anchors (probably one every 16"). To install this:

Not the answer you're looking for? Browse other questions tagged drywall framing interior or ask your own question.

1
How should I install a partition wall perpendicular to a finished exterior wall?

7
How to frame for a porch beam?
3
Interior wall installation over hardwood finished floor?
2
Can i leave existing drywall alone when adding two small walls to a finished basement?
1
Framing interior non-bearing wall with 24" on center for sound proofing
0
Should I remove existing drywall before framing a wall around HVAC ducts?
2
Where to split long walls
0
Some questions on framing a doorway in a hallway
1
What is the best way to add new stud framing above fireplace and tie it into existing framing?
2
How does framing a very tall non-structural wall differ from framing a standard height non-structural wall?