We have outdoor carpet on my covered patio that we want to remove. The problem is that the glue holding the carpet down is orange and very ugly.

ow can I remove this glue safely without injuring my animals (cats, dogs, desert tortoise).

I have a 2700 PSI pressure washer, will that do it? If not, what should I use to remove the glue so we can expose the concrete?

Simple floor scrapers like this one, pictured below have always done the job for me - they will take pretty much anything off a flat surface including splashed concrete. 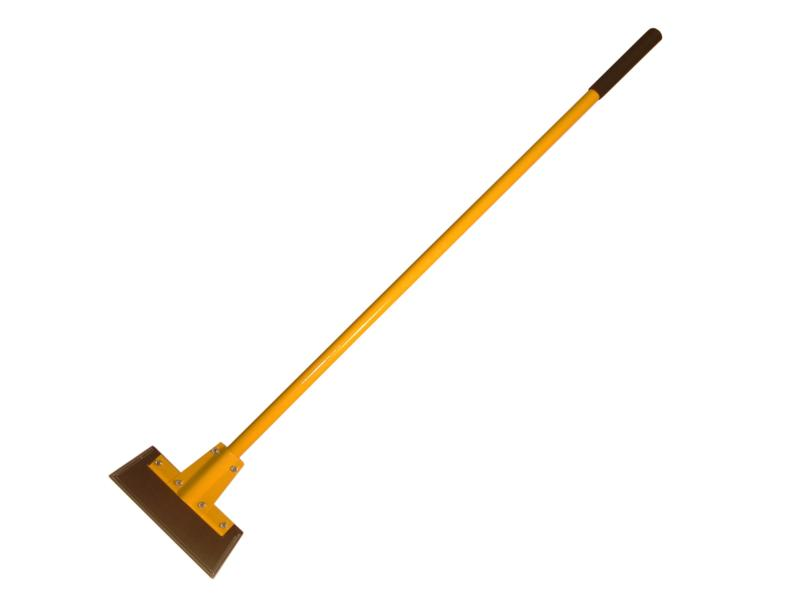 Nobody can really tell for sure what will work but you - we haven't got your particular glue handy to test.

Pressure washer is a good bet. You have it, so try it. If at first it doesn't succeed, try a narrower nozzle.

A wire brush might also work. If the glue is brittle, a silicon carbide grinding block may work - or you might rent a terrazzo-grinding machine at a tool rental store for a more industrial approach to grinding it clean, especially if it's a large area.

Muriatic Acid probably scares you as terrible for you and pets, but if you keep the pets off while using it, dress properly, and rinse throughly and then spray water and baking soda mixture around (not actually required, but worth it if it gives you peace of mind) it can be safe and effective at cleaning up concrete.

Removing outdoor glue is the bane of my existence. Chip the worst of it off with a sharp bladed scraper (Roberts 9" long handled scraper works for me).

Use chemicals to remove as much of it as possible. Chemical choice will change depending on the glue; if you don't know what type of glue your going to have to experiment.

Use an orbital sander. Start with the heaviest grit possable ( 24 grit is a good starting point) and work your way down to an 80 grit. Any more than that is kind of pointless unless you have a lot of time and sandpaper.

Burnishing or polishing will result in a nice finish for the concrete.

I found the below online and tried it:

How To Remove Yellow Carpet Glue or Adhesive

If you have ever tried to remove that yellow carpet glue from under a wall-to-wall carpet or rug that you have removed from your floor, you know exactly what I'm talking about. You know how difficult it is. I have tried just about every chemical that is available at Lowe's. You would think that someone there would know exactly what to do to remove it, but nobody does....(I've asked) and if they do, they aren't talking.

I have just gone through this dilemma and you won't believe it, but I have found a fix. Actually, it was not I who found the fix, it was my neighbor, who I would refer to as "extremely intelligent." After trying many different chemicals and cleaners, including Goo-Gone (I really thought it would work), and even after trying to use a heavy duty sander (wrongly recommended to me by a carpet store) that I had to rent from a machine rental place, I came to the conclusion that it was going to be impossible to remove the carpet glue from my floor. But I was wrong.

My neighbor came over with what looks like a hoe but it is really a flat scraper. She told me to boil some water and throw it on the floor. After letting it sit there for a few minutes, under the hot boiling water, say, 5 or 10 minutes, the glue becomes softer and more pliable....and only then, one is able to scrape it off. Unbelievable! No chemical would remove it....no machine would remove it (it just made the coarse sandpaper one goey, sticky mess), but hot water did the trick! I then, used the $17.00 heavy-duty hand blade scrapers that I bought at Lowe's (I would say that this was the only great purchase that I made).

I thought to myself, I have to share this with everybody, with someone else who is trying to do the impossible, who right now must be yanking their hair out in frustration, or banging their head against the wall. This WILL WORK. Believe me, don't waste your time and money buy going to the hardware stores to buy more chemicals because they won't work. I used a wire brush in some spots and that helped also

1
How to remove the "new carpet smell" (VOCs) from new carpet?
5
How do I repair the bottom lip of a concrete slab?
11
How do I remove THIN layer of carpet glue from concrete?
4
Can I use double sided tape to install carpet on a concrete floor?
0
How safely bring lamp wire into house?
0
Removing or leveling an old iron pipe embedded in concrete patio
0
Removing Carpet Glue
5
How to modernise this raised concrete drain in the middle of patio?