How can I verify where the pipes in my basement go?

In the photos below, I have 3 pipes coming up out of the ground in my basement. One is about 4" (sewer?), the other 2 are 2" (gray water?). Then there are a few coming out of the ceiling (vents?), all 2". The ones coming out of the ground are what I'm really puzzled about. I would have thought there needs to be a pump to take the stuff upward to the higher elevation where the septic tank is (the last pick is on the other side of the basement where the stuff goes out to the tank.

I bought the house in foreclosure and so I don't know where the underground pipes go. There are no other pipes coming out of the ground anywhere else except for the radon mitigation pipe. Could there be a pump in the ground outside? I did not notice a "pump" breaker in the electrical panel. How can I verify where it goes? 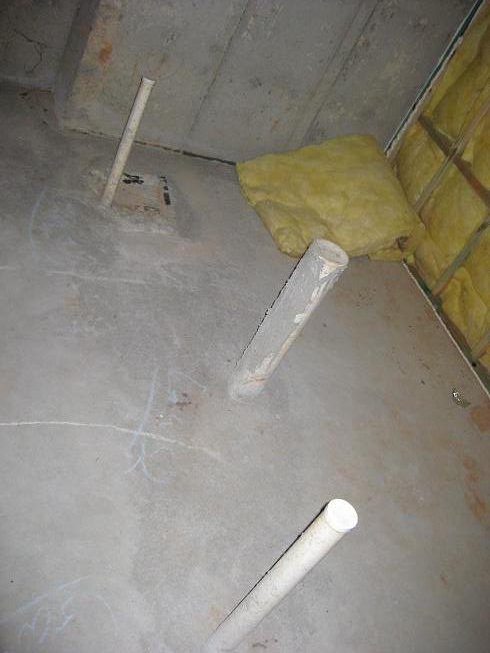 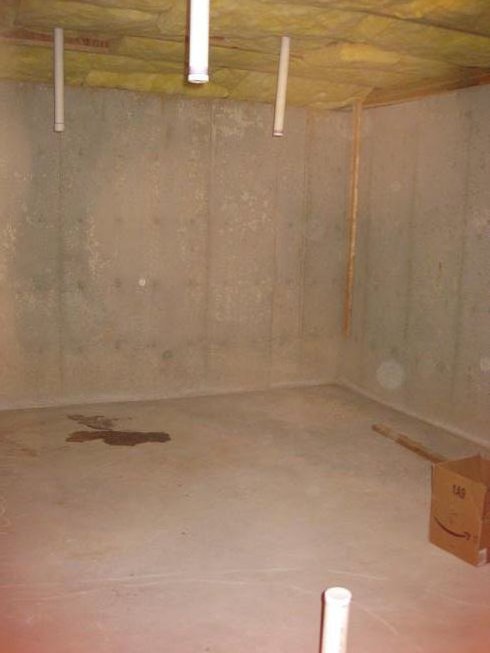 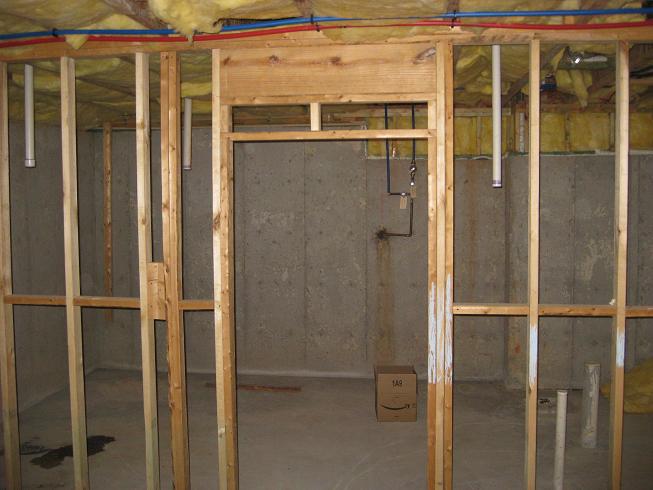 Sewage line out to tank on the other side of the basement: 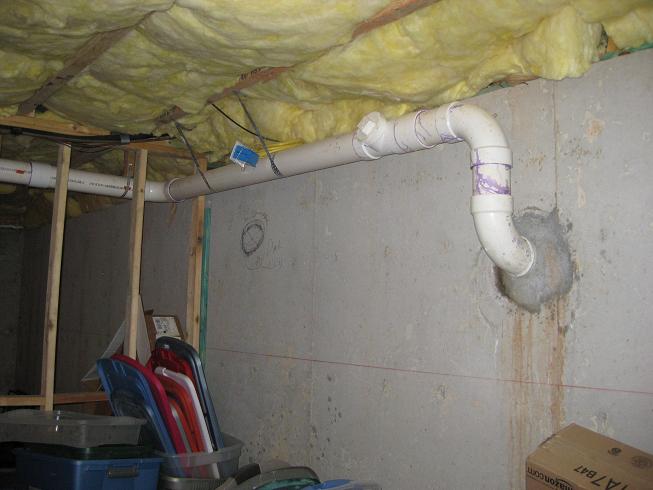 Update #1: The sniff test verified that the big pipe is indeed live to sewage.

this is fun, this is straight up detective work, and i'm sure you can figure it out with some guidelines

mike gives good advice, with the sniff test and such, but i think it might be easier another way.

if it was laid out for a basement bathroom, which would be my guess, then those smaller pipes would be vanity drain, and would be laid out to line up within a 2x4 wall. you will need a framing square, and a 4' level or some equivalent thing to make a perpendicular (square) line off of the wall nearest one of the smaller pipes, and then the other. basically you will want to draw a line that goes where the edge of a 2x4 would be if that pipe was right in the middle of it.

my guess is, from looking at your pic, that if you did this with both of those smaller pipes, they may not both be on the same line with each other, but the center of that 3" pipe will fall near perfectly 12 1/2 inches from the line you draw, on one of them.

12" is the standard layout for toilet from the wall, so that is your guide.

this may not help, but could.

other things to consider...

these builders are so cookie cutter by default, that asking a neighbor to describe their basement bathroom layout, could result in some answers.

they could easily put a glue type p-trap in the 2 inch or 1 1/2 inch pipe for your shower or tub, and bury it in the concrete, as you only need access if using the non-glue, slip joint type trap.

if i was betting, i would say the pipes you say are 2" are really 1 1/2" inner diameter, and therefor 2" outer, and if you do the square line thing i describe, you will find that from the one line, the other 2" pipe is around 6" forward, and the larger pipe is centered about 12" forward, this would mean your room is roughed in for a vanity and tub/shower. (really odd to have toilet in between, me thinks)

anyway, those lines coming from above are just left long so you can find em. they are vents for something, i'm guessing plumbing (an extra mechanical room provision would be very odd) they are vents, and you have much more freedom with vent pipes then with drain pipes, (for instance you can do straight 90 degree turns with no radius with a vent but not with a drain, as the water must be able to sweep to some degree for ease of flow around turns and changes in direction) so since they cant orient the upstairs plumbing / framing to match the basement, they would just leave you vents to tie into later, and expect you to have the floor joist region to be able to easily make the appropriate turns in the upstairs pipes to match with what you have in the basement. (remember these builders are doing the minimum required so that you can put a bathroom in later without having to conduct major surgery on your basement floor and / or upstairs plumbing and framing to get a bathroom accomplished at a later date.

move the insulation and see where those pipes from above connect to. as reasonably certain as i am to what they are, 3 - 1 1/2 vents for a toilet vanity and tub is vent overkill as i see it. (in fact, i'm a stickler on venting myself and to do this right there would have to be a vent coming out of the ground, already tied into the toilet line, so that may be another option, (that one of the 1 1/2 inch pipes are a vent) - (your vent should always tie in below the level of the p-trap, which since your p-trap is built into the toilet, the vent for the toilet should always tie in below that level, and in this case, would be connected to the toilet drain, below the floor, and therefor be coming up somewhere nearby. (i don't have my book with me right now, but I wouldn't vent a toilet with a shared vent from a vanity)

so yeah, if after drawing that perpendicular line from the nearby walls - you find that these 2" pipes are in line with each other, then my guess is one is a vent for the toilet. and i would be quite pissed off that nothing was written, etc or labeled so you knew which - as more than likely you can't legally just use one or the other. (one is designed to be a vent and will be tied in as such and the other will be tied in to the 3" as a drain and most likely will be different in build and function.

this exercise is all about you finding out as much as you can and just applying that to some common sense building practices.

Given that you have a septic tank, and the main sewage line is well above the basement floor, I'd be very, very wary using any of those drains until you locate a sump pump, sewage macerator/pump, or some other method where they are dealt with appropriately. Note that if you only find a sump pump, do not use them for sewage until you have a sewage pump installed.

They probably are there for a bathroom, and the sniff test may well show up as sewage, but that doesn't mean that there's a working pump system to properly drain the destination of these pipes into the septic system. I'd do a lot more looking prior to moving forward with using them.

Also, go to your local planning office - they should have the submitted plumbing, mechanical, electrical, and house plans on file for when the builder pulled permits to start working on the house. There may be little there, or there may be a lot, but it's always work checking, and generally you'll be surprised at what you find.

I don't have much to offer but I hate to see a question with zero answers so I'll post my thoughts in case any of them are helpful.

Do you know for sure what the intended purpose of these rough-ins was? The plumbing you've got doesn't look bathroom-like to me. Normally you'd have a toilet flange installed on one of the pipes prior to pouring the slab, and the vent pipes are entering the room in the middle of the ceiling instead of inside the walls where they'd normally be. There should also be a box formed into the slab to allow space for your tub drain trap, which I don't see in your pics.

Is it possible this was to be a mechanical closet, and maybe the ceiling pipes are flues for a gas furnace and/or water heater? You might be able to trace them for a ways by moving some insulation out of the way here and there. If they are flues they should each exit separately right out the side of the house; if you run into a tee and/or see them disappear upwards then it's most likely they are in fact plumbing vents.

If you don't see a sump pump or any evidence of one then I'd say you probably just have another waste pipe exiting out of your slab to the septic tank. Just because the one visible exit is higher on the wall doesn't mean your tank isn't lower than that. With a cap and PVC cement handy, you could cut the top off one of those pipes and give it the sniff test to be sure...

Do the ceiling pipes run up into the attic?

Bit of a wild guess, but if they do they could have been put there by the electrician and not the plumber as a run for new wiring, ethernet, etc.

1
In this plumbing code illustration, what are the meanings of "SH" "WC" "BT" "LAV", etc?
0
When cutting concrete for basement plumbing, how do you handle rough framing?

5
What should I consider when using a sewage ejector pump?
3
How can I stop veggie garbage from coming out of my basement storm drain?
1
How can I build my own water aeration system for radon mitigation?
1
Water is leaking from basement toilet. help
1
Mystery pipes in basement - where do they go?
1
Why is my sewage ejector pump running so long?
2
How can I figure out where the toilet overflow pipe goes?
2
Can I cover these pipes in my basement floor with concrete?
2
Can someone help me identify these rough-in pipes in my basement?