Replacing a spanned "beam" with a cantilevered beam

I have a support post in my attic that is holding up one side of a minor ridge beam. The post is sitting on two 2x6s on their backs, and which span 20 inches. Yes, these 2x6s are not on edge -- they are on their backs (height = 1.5 inch, width = 11 inch). I want to replace the 2x6s with a cantilevered beam and am wondering if I am thinking about this correctly.

Okay, so there is no visible deflection in the 2x6s (maybe I should say 6x2s) but since I have no idea what kind of load the post is holding up, I found a calculator that determines deflection and put in a heavy load to establish a baseline.

Stop right here. Are my assumptions correct so far? Are any of my values suspect? What about calculations?

Okay, assuming that is correct, I move to the cantilevered option. It needs to support 4500lbs with at worst a deflection of 0.0145. I use this calculator

That tells me that even with those extreme measurements, I'd still have a beam that is TWICE as strong as the existing support, even though it is cantilevered. If I went with a 8x12 glulam, then my deflection would be 1/256", twice again as strong.

The entire reason for this is because I am expanding the room that happens to be under that post. The room is going to expand out by about 2 feet, which leaves the post with no support on one side unless I do something about it (which I have to). 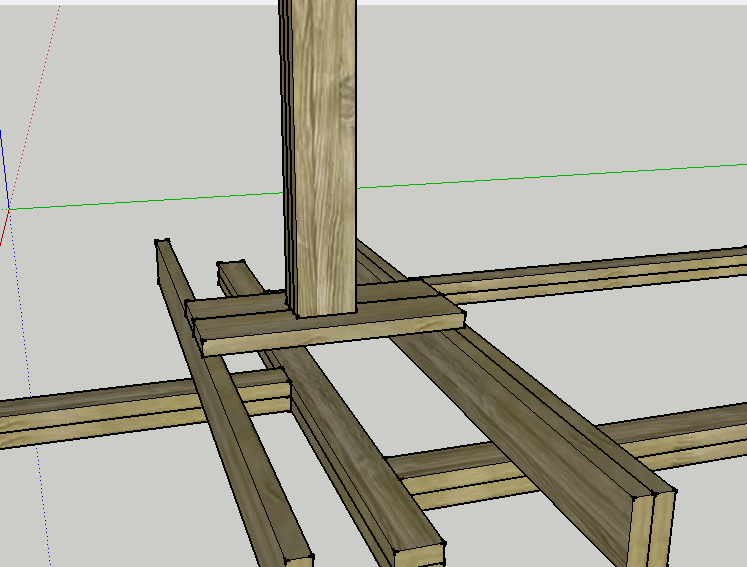 The doubled up 2x4s are walls. The joist-like beams are joists. That's the two 2x6s holding up the post, which is three 2x6s sandwiched together. The wall going off to the left will be completely removed and the other three walls will be moved to the right by about 2 feet. That means that all of the walls will be to the right of the post. The joists are all going away, too. 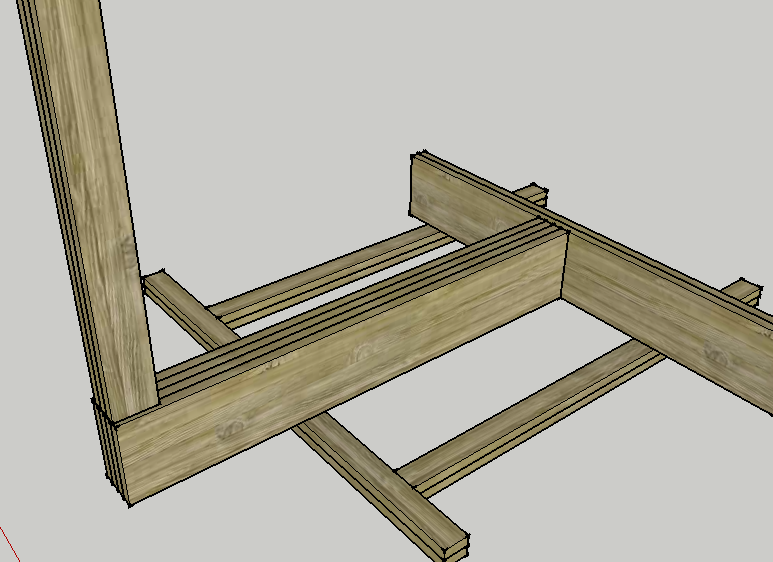 The supporting beam is either four sandwiched 2x10s (maybe 2x12s) or one big glulam. The two side walls are shortened by two feet and the perpendicular wall is moved those two feet. The back bolstering will be done by two 2x10s (or 12s) that are attached to the walls with hurricane straps. The support beam would use a joist hanger on one end and straps on the other.

I actually did bring a structural engineer out earlier for an informal consultation. He gave me some solid ideas on how to support that post with an expanded room -- basically install a 8x12 glulam from the other side of the room (not shown) to the new location of the moved wall. That's definitely an option. HOWEVER, since then, I also realized that I want to raise the ceiling by a few inches and if I do so, the option of resting the long beam on the opposing wall is gone (exterior wall with a low pitch roof). So I'm trying to figure out a way to support the post entirely from one side -- hence a cantilever.

OK first let me say that if you're going to be making major structural changes to a building (and this counts as a pretty serious structural change in my mind) it would be well worth your while to get an engineer or other qualified building professional to help you with your design. If you just "wing it" you may be endangering the house and its occupants. There may also be legal or insurance-related ramifications to doing this outside the proper channels. However, let me offer these pieces of advice:

As Chris says, a picture would be very useful.

At present I'm completely missing the point of replacing a spanned beam support with a cantilever. A picture might make the constraints that affect this idea more obvious. If there is support for the present beam, use it. Or do you have un-mentioned plans to remove the support from one side?

In the absence of a better understanding of the constraints, if the present system is sound, however kludgy it may be, I'd try something like placing vertical 2x stock beside the post, on top of the existing 2x6 laid flat, attached (nails and framing adhesive, perhaps a few steel L brackets as well) to the post and flat 2x6, converting the 2x6 from a plank support to a pair of L supports, without having to pull anything out (life gets too interesting too often when you start pulling supports in old houses. If they are not rotten, I avoid that if at all possible.)

If the post is all the way out to the edge of the 2x6, similar approach, but the new 2X going beside rather than on top of the 2x6 - which is actually easier to fasten in place.

You get all the benefit of "worked for 30 years" along with some extra security from serious reenforcement.

Not the answer you're looking for? Browse other questions tagged joists structural engineering or ask your own question.

1
Is a sandwiched beam made out of 2x4s laid flat a suitable for a 15' span that doesn't carry a load?
8
Structurally required? I-beam support under stair opening header
0
Cantilevered roof overhangs
0
Extending joists to reach a new beam. What code to review?
1
Replace steel suppost post with wood
1
How to repair a beam of structured 2x10s
6
Should I replace a carport post as it was originally built or with an upgraded column?
0
Steel H Beam Needed For Outdoor Deck
3
Deck, Connecting two beams to support cantilevered joists