How do I mount a TV to cover a cubby hole above my fireplace?

I have an odd space above the mantle that my wife hates, and we tried covering it up with our TV, but I'm not very confident that the mantle is strong enough to hold the TV. I would like to do something so that the TV can stay there, whether it be mounting the TV to the wall (not sure if this is possible) or put drywall over the cubby hole and then mounting a TV. In the picture you can see the cubby hole in the wall behind the TV. Is either of the options I listed able to be done and does anyone know what is likely in the small section of wall from the top of the cubby hole to the ceiling? 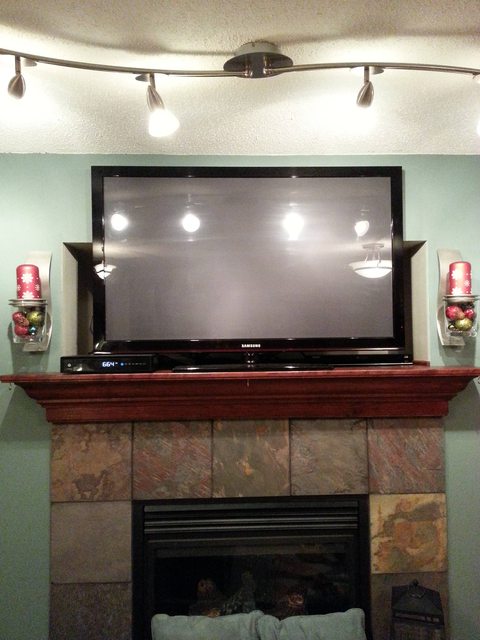 I would build a 2x4 (or 2x6, it's hard to tell the depth from this picture) frame to fit into the cubby hole, something like this: 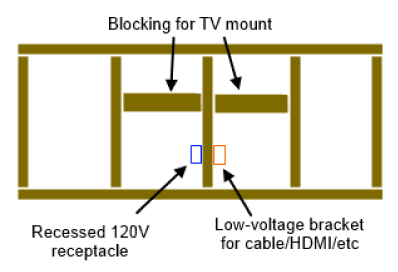 Space the studs 16" on center. You'll need to attach this securely to the rest of the walls. Assuming they're also wood, a few 3" #10 screws into either side would probably do the trick. Be sure to recess the frame by 1/2" so when you put drywall on it's flush.

The blocking can just be a 2x4 or 2x6 flat against the front edge, and gives you a very solid surface to screw a mount into. You probably only need it for one edge of the mount, so long as you screw the bottom into at least one stud its should be sturdy enough.

You can also use plywood (or OSB) on the surface, either with a layer of drywall overtop or just in the center of the hole, butting the plywood edge to the drywall. Kind of your choice which way is better, just remember if the finish is all drywall, it's easier to remove the TV and just patch the holes later.

It looks like there is already power there. Keep in mind all junctions MUST be accessible from the finished space, so this means you'll have to put power in a spot that the existing wiring can reach, or re-run wiring. There are various types of recessed plugs that can make things easier when dealing with a mounted TV. 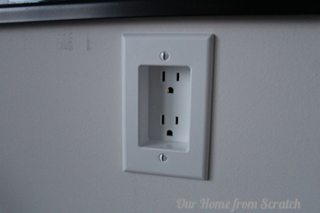 Some of the plugs also have low-voltage, or you can run that separately. Again, I don't know what's there now, so I can't make specific recommendations. It's not against code to make signal wire connections in the wall (eg, splicing coax), it's just not necessarily the best idea because if the connection fails, it's not accessible. 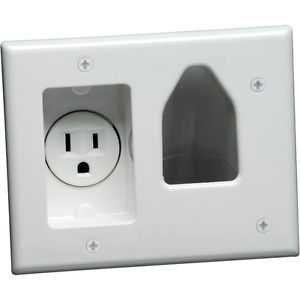 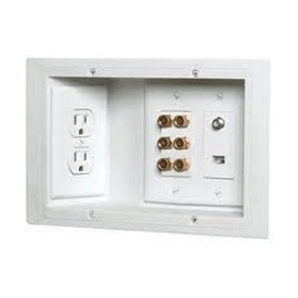 I'm a fan of just having the cables come out of the wall (without separate connection jacks) behind the TV since 1) it's cheaper, 2) it's easier to install, 3) it's less likely to fail. The picture above on the left is one way to do this; in my last house I used a recessed media box that has grommets on the faceplate, and this is a great way to go: 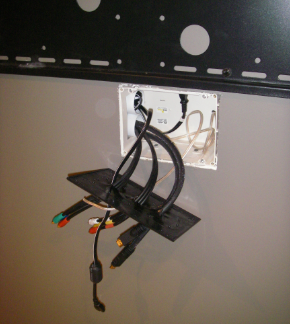 (Note, I did that nearly 5 years ago, and ran everything I thought I might possibly need. I only ever used a single HDMI cable, and actually eventually ended up pulling most of the other cables out. Since I had everything in two 2" central vac tube conduits going straight about 10' opening into an unfinished space, this was trivial for me. YMMV.)

You may also want to run cables to a spot on the wall next to the fireplace, to put your sources (receiver, game console, whatever) there instead of on the mantle. Since you're going to be patching drywall anyway, if you need to punch some holes to fish wires, now is a good time to do it.

You might also consider running a conduit, so you can run future cables through. If you do this, be sure to run a reasonably big conduit; cables like HDMI can't really be spliced so you have to able to fit the end through. Also, don't run anything in the conduit today (except for a pull string, if you want). Just run existing cables beside the conduit; if you end up having to replace them the cables are obsolete anyway, why bother with trying to pull them out and potentially getting stuck, etc.

Finally, put new drywall up and patch it in, feathering the edges (there are lots of drywall questions here to address that part, specifically). This will typically take 2-3 days since you have to wait between coats.

Finally, you can paint. If you have the original paint and it was painted fairly recently, you MAY be able to just paint the new part and have it blend without being noticeable. More likely, you'll have to paint this entire surface (up to any edges/corners), so be prepared for that. Around corners even reasonably big differences in color are not perceptible, but on a flat surface even the slightest color difference is very obvious (trust me, I've been there, including the "Crap.. maybe it's just because it's still wet" thought, to which the answer is: no, it will still look off when it dries).

If you don't have the original paint you can color match. Also, obviously, if you've been thinking of changing the room color anyway, now is a good time.

Good luck, let us know how it turns out

We also had a cubby above our gas fireplace. Our tv fit Into the cubby but it was a pain to watch tv with your neck crained back. The cubby was already fitted with electricity. I searched all over for a way to lower the tv to eye level. After much research, we settled on the dynamic mounting system.

The cubby was 26" deep. We looked at arms that attached to the side walls but the strength was not enough to accommodate daily use age of our 48" flat screen. Dynamic Mounting had the strength and durability and with the swivel function, we were sold. I talked to a friend of mine who is a contractor and he came up with the following installation. He built a partition that sits 10" back from the mantle. He mounted the Dynamic Mounting brackets on the partition. He built a trap door into the partition so test we can access the wires to all the various electrical components. When not needed, we put the trap door up.

When we watch tv, we pull out and down to eye level and the tv can swivel left or right depending on wherè you are sitting, when not in use, the tv sits in front of the partition and on the mantle -but it doesn't actuality touch the mantle because Dynamic Mounting brackets hold it up.

The contractor who installed it had installed different mounts. He said the Dynamic Mount is the best one he has seen in terms of strength and quality. Many of the mounts out there bend and tweak under the weight and stress of the mounts. Dynamic Mounting is amazing.. It is more expensive but you get what you pay for. Here are some pics. We still have to paint the partition. Good luck. ! 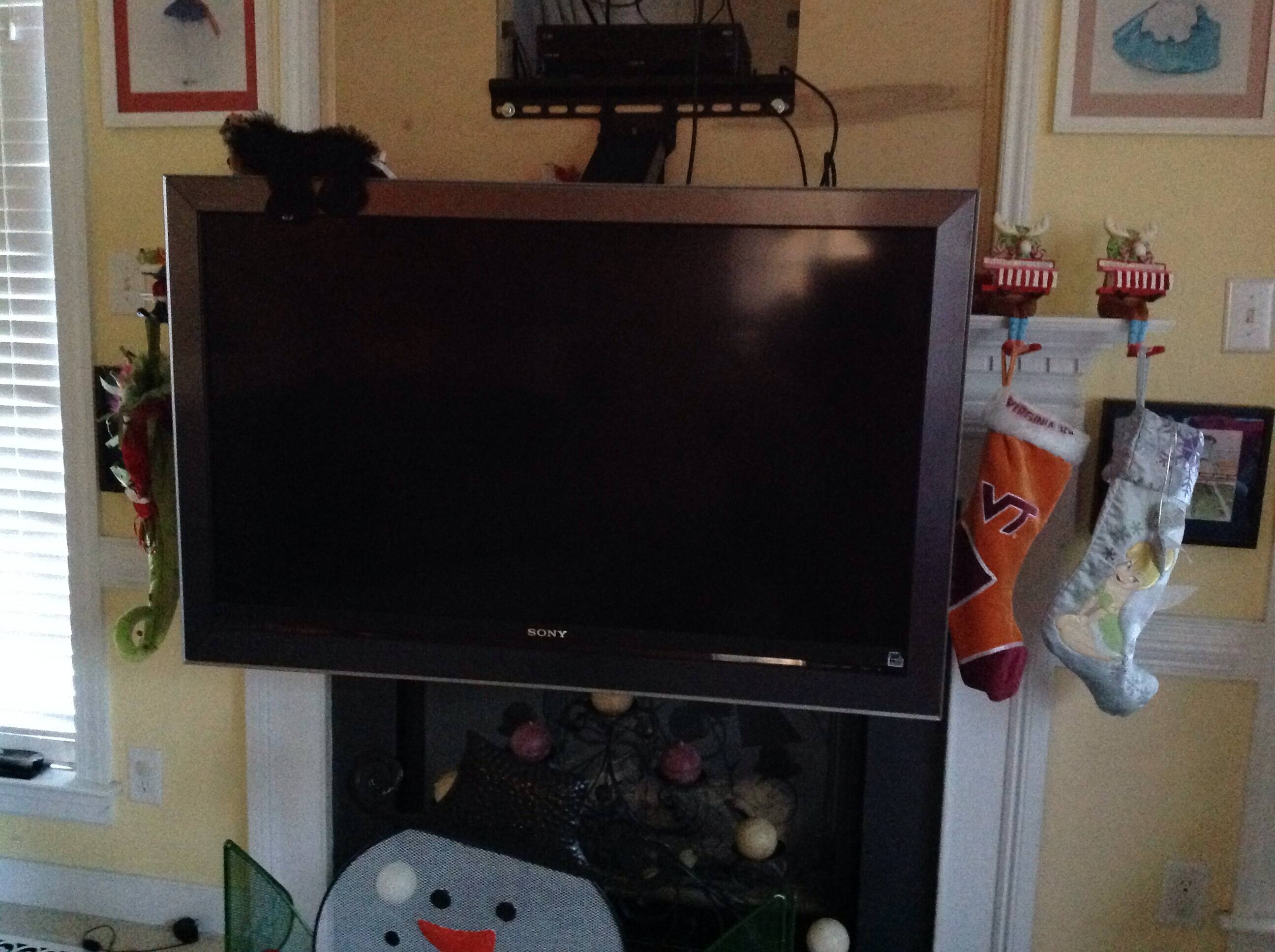 Not the answer you're looking for? Browse other questions tagged drywall walls installation fireplace or ask your own question.

2
How to (portably) mount warped plywood artwork on apartment drywall?
2
Mount TV in stone facade or drill through to chimney block?
3
What is my wall made of and how can I cut it without chipping?
4
Need some help with wall behind rangetop
2
What's this metal thing in my wall where the studs should be, and how do I put a shelf on it?
0
How to identify the wall type and studs for drilling
0
How to repair holes in wall and properly mount a clothes pole?