What header joist sizes do I need for a loft bed?

I've decided to design and build a king-sized loft bed for our bedroom. Basically, I've got an 80" x 89" frame, 54" off the floor, covered with slats instead of plywood (see image, below).

I'm sure I'll have other questions (and I haven't dealt with lateral stability and a few other issues yet), but for now I'm just trying to size the header joists correctly.

I was able to use the AWC span calculator for the joists, themselves, and I should be clear with 2x4 No 2 Douglas Fir. I intend to use mortise and tenon joints to attach them to the headers.

My question is: What calculations or tables can I use to size the headers? 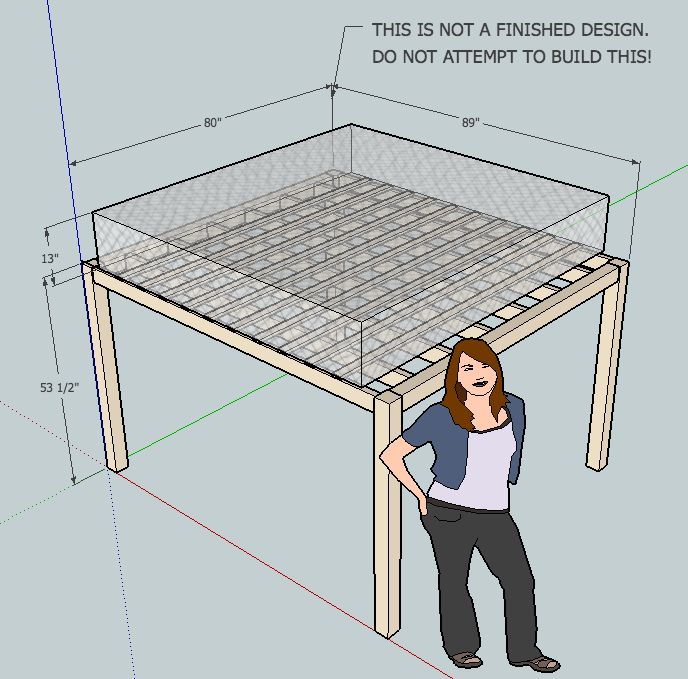 Considering that you have a relatively high sideboard/headboard and footboard arrangement, that can be used to help strengthen the headers around the perimeter. The strength of a piece of 3/4" plywood, 21 plus inches tall on the sides alone with a small ledger to support the joists and bed slats is sufficient if all is glued and screwed together and has a sufficient bearing surface, 1" is ample.

Since it is for sleeping, typically at most for two people, and if you have kids too, the bed would need to hold say only the weight of 4 to 6 people, then add a little more to cover murphy's law so the weight of 2 adults and 4 kids may run about 700 lbs., let's take that to 1000 lbs., kids jump up and down.

The bed you have at nearly a 7 ft average on both sides will yield 49 sq ft, multiply that by 40 lbs/sq ft and it will carry 1960 lbs. a little overkill but ok. So the live load using the AWC calculator at 7 lbs dead load and 30 lbs live load at 16 inch centers you can use 2X6's and still carry a 10+ span with SPF or 8+ with D Fir, plenty strong.... The same calculator gives a recommendation for the bearing ends of .30 or so of an inch, Don't be fooled on what an inch of bearing can do. I would expect if you mortise the ends in and secure it with a screws (gauge your screw length properly for end grain) It will do all you expect.

The matter at hand is the headers at either end, I had supposed the side boards etc., were to be fixed permanently to keep the occupants safe, therefore I was going to use that as part of the structure too to keep the bulk of everything down. If they are to be hinged or drop down then the header will need to work on its own, I would suggest using a 2X8 for the perimeter, mortise and tenoned for shear strength and use a captured nut with bolt to draw the joints together. That with the face of the 2X8 against the faces of the legs will give a lot of lateral resistance. For your own investigation, and practice on making this critical connection, make a sample joint and put it to the test. I have used this type of connector to hold a 7 ft wide 4 ft tall gate out of 2 inch thick solid mahogany using standard bolts and site made washers to fit the slot for the nut- Four 1/2 inch bolts were used for this, still hanging after eight years outside Just as a mention, and you may know this already, the AWC calculator is for home building, quite the different animal than furniture making.

Quoting a fantstic answer I got from another source:

There is math for it.

However, the math gets a bit complicated -- there's interplay between wood sizing, column-buckling computations, screw strengths, and so on -- and so generally what happens in this sort of small-scale case is you build it so that you can hit it good and hard and it feels rock-solid. As with many structures, it will feel a bit flimsy before it actually is flimsy -- but also flexing will cause screws to work loose and so on, which isn't necessarily included in the strength computations, so flex is bad even if it theoretically will support the load.

Also, what the general theoretical formulas tell you is whether something will fail in a particular way. There's a risk of untrained people using the formulas to compute something that won't fail in some obvious failure modes, but not thinking about others and thus designing something too weak -- and I say that as an engineering grad, because that's generally one of the things you learn by bitter experience somewhere around junior year when you finish "strength of materials 101" and think you know everything. ;)

For things like houses, there are empirical formulas of how to build things in standard ways and how much load those standard structures can support, which is how the world avoids that problem in practice. And, for things in houses that are non-standard, you have certified professional engineers.

Case in point re theory: The strength of a horizonal beam goes as width * (height ** 3) -- so long as it doesn't twist! But there's a point where the thickness of a joist becomes too thin compared to its width and length, and the twisting mode goes unstable and becomes the actual failure mode. (I'd guess that on a king bed this isn't going to happen with 2xN boards, but it probably will happen with 1xN ones.)

You'll notice, if you've been under a house, that there are often X-braces between the long joists for that reason.

Not the answer you're looking for? Browse other questions tagged wood floor deck framing bedroom or ask your own question.

5
Can mortise and tenon joints be strong without glue?

1
Can I use a threaded rod for a rafter tie?
5
Can mortise and tenon joints be strong without glue?
3
How to install a new window header that overlaps an old one
1
What size posts for elevated Kids play house?
1
Framing a small open-walled outdoor structure
2
How can I frame a four-sided cantilever on a 10x12 freestanding, floating deck?
0
Joist size calculation for attic loft conversion
1
Proper window header for 6-foot window & understanding the span tables?