Why am I measuring decreased voltage between my dryer's neutral and hot conductors?

At the circuit breaker:

Do I need to run a new neutral wire?

There is a problem with the neutral wire. I would start by making sure the screw in the breaker box to the dryer's neutral wire is secure, and that the wire is mechanically intact by firmly wiggling it at the neutral bar end.

Also, the neutral bus in the main breaker box should be bonded to ground—usually by a green screw like this:

Check the bonding screw by unscrewing it a turn or two and then screwing it back in well. If this is not in a service breaker box, but an auxiliary panel instead, there must be no neutral to ground bond.

If the breaker end checks out okay, then look inside the dryer outlet box. (Turn off circuit breaker first.) Those have screws to secure the house wire into the outlet. Make sure the neutral wire (as well as the others) are mechanically sound and firmly attached to the socket.

If you measured the neutral inside the dryer, you should also check the appliance pigtail ("wall cord") for signs of wear.

If the ends of the neutral wire are okay, then it is time to measure the resistance of the wire from end to end. Unless the dryer is located within leads span of the breaker box, you will need to scrounge up a piece of wire to extend the lead range. It can be any gauge, but do measure its resistance so you can easily determine the additional resistance of the dryer wire. The dryer's wires should be 8 or 10 gauge so the resistance should be very low: 100 ft (30 m) should be no more than 0.10 ohms.

This situation suggests that the neutral conductor has a problem somewhere between the dryer outlet and the panel.

The conductor should behave as a very low resistance, which drops 0V (in particular in a multimeter test, where very little current is permitted to flow due to the very high resistance of the meter).

In practical terms, it means that the neutral connection is broken somewhere. Perhaps the wire itself is broken, or a hookup. Even though the connection is broken, current is able to find a way to flow through an alternative path, which has a very high resistance. This current shows up as a voltage of around 75V which subtracts from 115 to leave 40 across your meter. The voltage is simply from Ohm's Law: V = IR. Some tiny current I, flowing through a huge resistance R, happens to make 75. 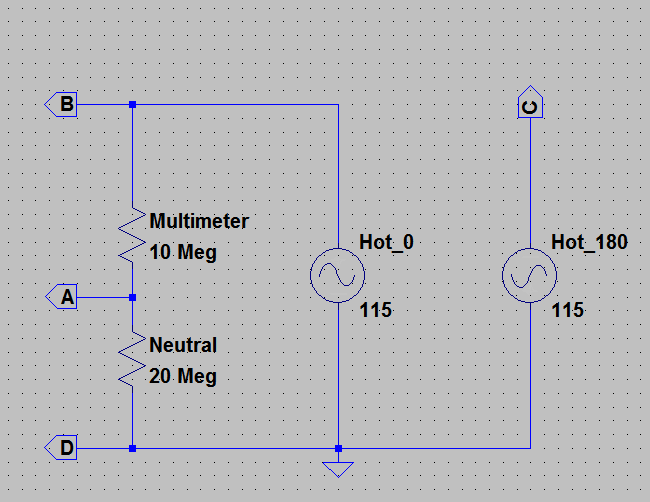 Here, the multimeter is symbolized as a 10 megohm resistor. The bad neutral wire is modeled as a 20 megohm resistance. This means that AC voltage between point A and B (what the multimeter measures!) will be 115 x (10/(10 + 20)) = 38.3V. If the neutral connection weren't faulty, the meter would take the full voltage and show 115. This is all exactly same if we disconnect the meter from point B and connect it to point C instead: the other AC phase. Between the two phases, there is no fault: if we measure between B and C, we get 230 because they are opposite phase, and since ground isn't faulty, then from ground (such as point D) to ether B or C, there is 115 VAC.

The resistances are just representative. Your meter and the faulty connection could both have a much higher resistance.

Not the answer you're looking for? Browse other questions tagged electrical wiring dryer or ask your own question.

1
Where in the breaker box should I terminate the neutral wire from my dryer circuit?
6
What is the explicit difference between the ground and neutral wire in 110V systems?
2
Wiring question - Swapping in GFCI breaker for my dryer
1
Why is hot-ground reading a different voltage from neutral-ground?
0
Convert 220v dedicated oven connection to 110v receptacle?
1
Voltage from Neutral to Ground
1
Why does my outlet have two white wires on the neutral side and one "neutral" wire is hot?
1
Why hot without neutral going downstream
3
Measuring AC voltage at the panel - why avoid measuring from neutral?