Should the hammer function "feel" different from normal drilling function on a hammer drill?

Just bought this hammer drill to drill in very hard concrete, which it was unable to do. What surprises me is that I feel absolutely no difference (vibration while holding it, sound it makes, drilling efficiency) between when I set the hammer function or the drilling function.

The switch to select between hammer and normal drilling is clumsy though.

Question: is it the case that hammer and drilling function should always feel obviously different when using it?

In most combination drill motors, the hammer mechanism works similarly to this. 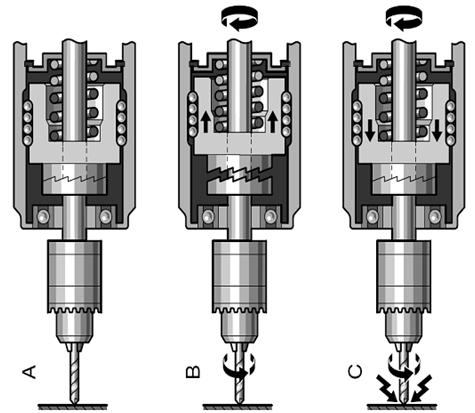 In this case, the lower jagged bit is fixed, and the upper portion rotates with the shaft. As the shaft rotates, the two plates slide against each other. The jagged edges cause the upper portion to tension a spring, storing potential energy. As they slide further, the energy in the spring is released, and the weighted shaft is driven forward (down in this illustration). This allows the tool to deliver many beats per minute, but reduces the force delivered in each beat.

This system allows the hammer mechanism to take up less space, but the limited hammer travel and weight, reduce the force delivered to the shaft. Which is why a combination drill motor will likely never fully replace hammer drills.

In a hammer drill, the hammer mechanism is almost always separate from the rotation mechanism. This allows the weight; or hammer, to be driven independently of the rotating shaft. As the shaft rotates, the weight will be driven into the end of the shaft, producing a linear force along the shaft.

This system will produce less beats per minute than a combination device, but will exert much more force per beat.

Because the hammer mechanism in a combination drill motor may have a very high frequency (beats per minute), and lower force per beat, the hammering action may be less noticeable. You'll also find that while the drill is spinning freely (not pressed against a surface), the hammer action is not engaged at all.

So to answer your question directly. Yes, it is possible to not really notice a difference between the hammer and non-hammer settings when using a combination drill motor. However, if you can't feel the hammering, the surface you're drilling probably won't either. Not all hammer mechanisms are created equal. Higher quality tools will almost always, have higher quality hammering mechanisms.

My hammer drill sounds and feels exactly like a normal drill except when pressing the end (where the bit goes) into something. Take out the bit, press it into your palm, and pull the trigger. You should be able to notice a difference.

3
Can my rotary hammer act as a hammer drill?
2
Can I realistically replace my drill with a rotary hammer?
1
Building a well-rounded set of bits
3
What parameters (torque, speed, impact, impact energy) are more important when drilling into reinforced concrete?
0
Unable to drill into window lintel - what have I got wrong?
0
Reinforced concrete drilling: wall plug won't fit
3
Is it normal for a hammer drill bit to wobble?
0
Type of drill that can make quick work of pre-drilling red-heads / concrete screws