How can I repair the start button on my LG washing machine that is hard to press?

The start button on my LG washine machine WD14700RD is very hard to press, and getting worse.

I need to lean on it with my whole body weight in order for the program to start.

All the other buttons work fine, so I am guessing it's a problem with the contact point behind the start button.

Can I try to repair this myself? Should I just remove the top of the washing machine, then try to remove the control panel, and see if I can get behind the plastic start button?

Ok well I managed to take off the control panel. There is a little plastic arm behind the start button that had been worn down on the end and wasn't making contact with the electronic button underneath.

A little bit of tape on the end of the plastic arm did the trick.

And that's it! All you need is a screwdriver and some tape. Too easy :)

Using a hole punch, make 2 layers of electrical tape rounds. Put them on the end of the start button nib with slow dry super glue. Be patient. You are trying to add a few thousandth of an inch. The tape is non-conductive, not brittle, requires no special tools and is a much better fix than wrapping. The push button is not available as a separate part, you must buy the entire control panel, or do this easy fix. The button shown at repair clinic.com is the dryer button, the outer silhouette is the reverse of the start button, the nib is nonexistent, and costs over 30 dollars.

LG button stuck in & would not start. I tried suction method & tape compression without success. However achieved quick success Without removing control panel , I gently wrestled the thin silver plastic ring surrounding power button with thin metal dental teeth /gum cleaning tool and gently inched it out and away from sunken power button removing silver retainer ring completely from power button with ladies eyebrow tweezers enabling me to carefully pull plastic ring forward and off from control panel. Next used my teenage daughters pimple blackhead remover tool- fit beautifully around and slightly behind power button lifting it forward. Machine turned on. Power button is now raised to higher level and it now works. I did not reattach the plastic retainer ring as it was not necessary for machine to be operational.

As I was pressing it to adhere, the washer turned on.

It is staying affixed for now. 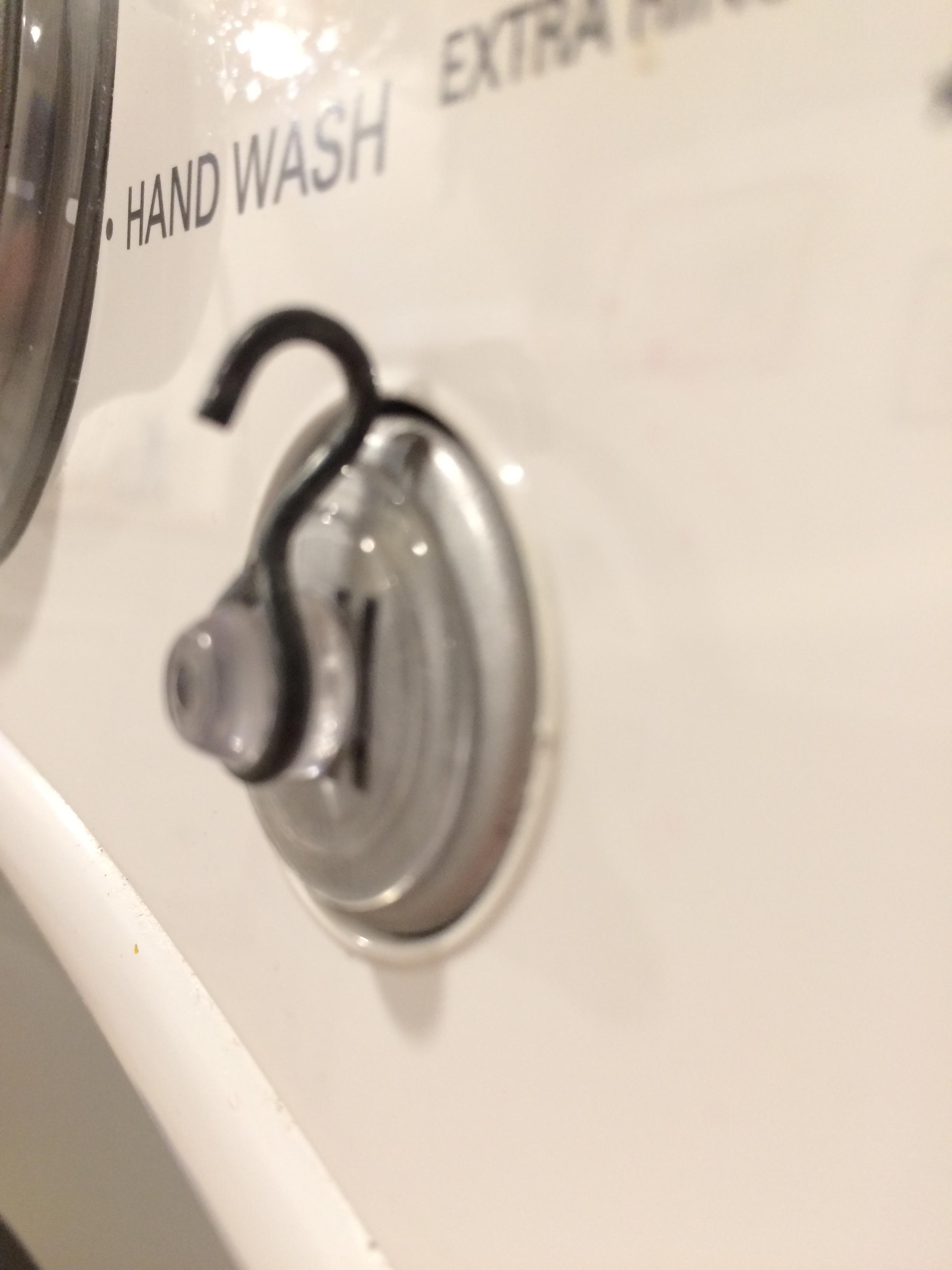 I've had great luck with www.repairclinic.com for appliance repair parts. I'm not familiar with your machine but usually replacing the control panel or a button is pretty easy. Having a replacement part on hand is helpful because you can see what the part looks like in isolation to help guide your dissembly.

I was having the same issue and worried it wad going to be some lengthy & costly repair. I did a simple restart by unplugging my washer for 10 seconds, plugged it back in ten held down the start button for 5 seconds. Boom... It worked!

As suggested by one commenter, I used a small 18 gauge brad nail in the hollow end of the back of the button, cut to size so it was just slightly over the edge of the tube. It worked; let's see how it holds up.

Button was stuck in. I used about half inch of gorilla tape. Stuck it to the surface of the button and gentle pulled and wiggled it. The button popped out and worked again.

I thought I would share our experience because there's no mention of this issue on the web.

Our washing machine would not power on. It is a digital, three-year old, LG top loader. We unplugged and plugged it back in several times and sometimes that would work.

We removed the front 'pretty' button-picture panel (not really sure what to call it). It's sort of just glued on. We didn't take it off cause the knob would not allow for it. Honestly we had the whole damn thing apart.

The touch buttons all have this tiny metal strip on foam push button. The power buttons metal was worn off. The washing machine worked when the power button was pushed. So we just drilled a hole through the panel so we could push the button. You could probably fool around and try to replace the metal with foil, but we were just tired of messing with it.

This was our way to save from buying another machine, expensive parts that weren't needed or pay for repair service.

I used a silicone gun, filled a little so it does not fall and put just a milimeter thick layer. All perfect!