My hot water circulating system was installed in 2006. It has a dedicated return line from all faucets. I've been having trouble lately with the hot water, it turns cold at the faucet when the pump is not on. I just replaced the back flow valve thinking that was causing my problem but I was wrong. Does anyone have any idea what might be the problem? The water goes cold after turning off the pump. It stays running cold until the pump is turned on or the circulating system is isolated from the rest of the plumbing. This occurs at all faucets. They are all single lever faucets. The water never gets hot again until I turn on the pump or isolate the circulating system. I do not know how it is hooked-up. What you say makes more sence. I think that the back flow valve may have been installed backwards. That would explain hot water turning cold when pump is off.

Here's a diagram of a hot water recirculating system 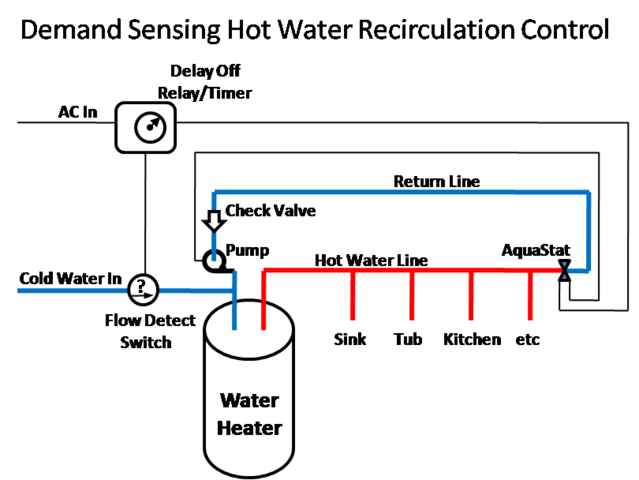 As I understand it, the idea here is that the recirculating system runs hot water around the pipework to keep the temperature hot near the faucets/taps. This allows for instant hot water at faucets/taps far from the water heater.

Even when no taps are running the pump should be actively maintaining the circulation as needed. It needs to do this as any unlagged pipes will cool the water in them if no faucets/taps are drawing hot water.

When the water near the faucets/taps is sufficiently hot, the "Aquastat" will turn the pump off.

Your power feed to the recirculating system should be via a timer, or other device, that lets the pump run whenever the "Aquastat" feels necessary. This should be "on" during any times of the day when you are likely to use the faucets/taps.