How can I fix a shower faucet valve where hot and cold suddenly reversed?

We have one of those faucets with one handle which first goes to cold and then progresses to hot as you go further from off. Or, at least, it used to be that way. We went on vacation, had someone staying in the house, and, weirdly, when we came back, the situation was reversed: it goes to hot right when opened up, and then to cold past that. What's more, hot is about 5% of the range right at the beginning, with most of the rest of the dial just being cold, cold, cold.

Our housesitter says she has no idea that anything happened, and that seems reasonable... but, for whatever reason, something must of have twisted inside, although I'm not sure what or how.

We've finally gotten tired of this and wanted to fix it. I contacted a plumber, and he said that they'd come, take a look, and then drive to the neighboring town to see if the plumbing supply has the right part — all on the clock. I don't want to argue about the business model there, but, really, we just can't afford the risk of an open-ended trip like that.

Here's a picture of the valve / cartridge: 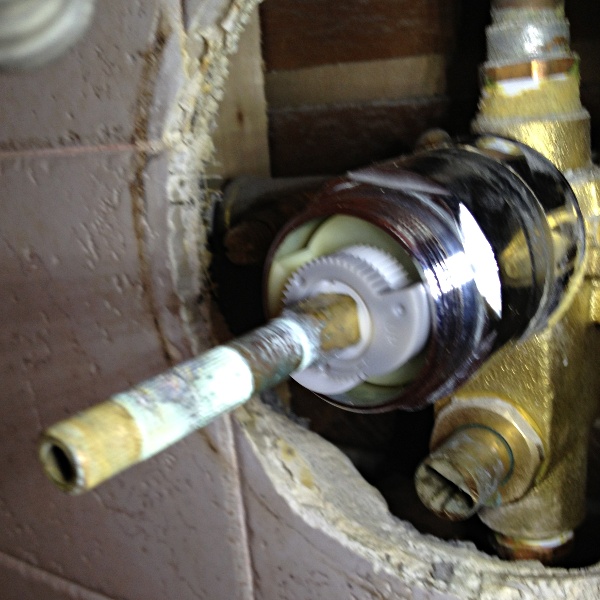 There are no obvious model or serial numbers or any identifying parts.

Is it possible that the little plastic toothed parts are just slipped in some way? I didn't want to mess too much for fear of making things worse.

It's actually a Danze. I had to replace mine as my hot water would not shut off. After alot of investigating and calling different suppliers ex: Moen and Delta, I was directed to Danze 1-800-487-8372. I sent them a picture of the cartridge and it was theirs.

if it is a MOEN Faucet just remove the handle from the stem & turn the stem 180deg. & re-install the handle & all should be back to normal again ... Hope this cures it!

I'm not a plumbing expert, but I installed a new cartridge in my shower and had this problem. I think a new cartridge was installed in your absence for some reason, and installed incorrectly. Should be an easy fix, shut off house water, take it out and rotate it 180° reinstall, turn water on, should work fine.

Looking back several years, is always easier to answer a mystery.

I drew this valve, several years ago for my company in their parts manuals.

This valve was ordered without markings. Oddly, it came for a while with the company name, until it was removed--GOBO. I drew its name in my proofs, which is how they found it.

Inside, each hot and cold has its own tear drop hole shape to control water volume.

Let's go over the cold operation. It has a spring with a hollow rubber cap on its end. When off, it is just outside a tear drop shape in the brass. Once you turn the stem, the spring slides over the tear drop, from smallest point towards the largest of the drop. This controls the cold water volume, as water flows through the spring and out the hollow rubber cap. The hot is the same action. Together, as you move the stem, they move off, to along their tear drop holes.

When I was finished, I had to put it back together. It took me a while to figure out how to turn the water off, and allow correct hot and cold controls, as I was never around water. That's imagination for you.

If you look at the image, that we have here, the dot would have been up and found on the square section of the stem. The gray and white cams are correct, as shipped, and before any personal temperature adjustment.

More than likely, yours may have been the early release without the dot.

In time, the springs and rubber caps wear, which is another issue on its own.

To defend that the blame is else where, there is a pressure balance piston. It moves in-and-out and rotates to control pressure, actually water flow through several of its tiny holes.

When I rubbed my fingers across the holes, I found barbs, which I brought up to Engineering. Later, I heard customers complaining, that their pistons had seized (frozen in place).

This would explain a sudden quick failure of water flow and temperature control, with no tampering by the customer.

Not the answer you're looking for? Browse other questions tagged plumbing shower faucet valve or ask your own question.