Can I use a circular saw for precise cabinet making

I will be building some cabinet boxes and my table saw has a short span in the fence so I can't cut to final dimensions on it.

I've made some cuts before using a saw board guide and a circular saw, but I'm not really sure if that will be precise enough. Even more when I think that I will have to repeat the same cut many, many times.

Can it be done with a circular saw? I thought about buying a Makita Track Saw SP6000 (we don't get Festool in Brazil), but it is expensive and I don't know if the result would be much better apart from being faster.

If you're making many similar cuts, it's often worth it to build a jig. Jigs will allow you to make many repeatable cuts, quickly and easily.

There are also loads of guides, slides, and jigs available off the shelf (or online anyway).

Also, don't forget to use the proper blade. You probably wouldn't want to make furniture with a 24 tooth blade, unless you don't care much about the cut quality. If you're cutting plywood or veneers, you'll want to use at least an 60 tooth blade.

Whether you use a table saw or a circular saw, precision isn't based on the tool but on how you control the tool.

With a circular saw, as long as your measurements are precise, you can get precision, if you can control the saw well. To that end, a track saw is a GREAT help. It can ensure your long cuts on lines are perfect (if your line is perfect, of course).

So yes - you can do it. Just remember, measure thrice, cut once.

Yes, a circular saw can be as accurate as a table/track saw. The only disadvantage is that it might be more time consuming to set it up for an accurate cut.

A guide/jig is crucial. You can easily build one, or buy one.

Hand-held circular saws also often come with coarser blades, so you might want to buy an aftermarket blade with more teeth, to prevent chipping on the bottom.

I have seen were people make their own oversized table saw by mounting a circular saw to the bottom of a piece of plywood. Personally I would use a piece of melamine for easy sliding. Put the plywood on some horses. Add a 2x4 frame to stop wrapping. Zip tie the trigger and use a powerstrip for power switch. Clamp or screw down a straight edge for a fence.

You want a panel saw: 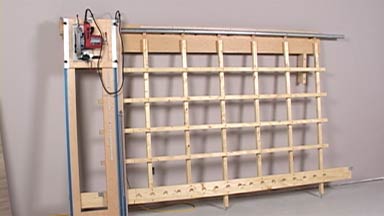 Some are dedicated saws designed for the rig itself. Others are the rig that you can attach your own saw to.

I have lots of experience making precision-cuts on sheet-goods with crappy tools, and tools which seem inadequate to others. It has always been impossible for me to hand-guide my trusty old SkilSaw - other than for rough carpentry work to anything below + or - 1/16".

Yes! You can use a circular saw for high-precision work, but I have found the fancy jigs AND REQUIRED saws (Festool and all) much too expensive for me.

For a good straight line, you can [usually] use the factory-edge of a sheet of plywood as an effective straightedge. Caution: You cannot always trust the factory edge to be straight, so you'd better check it to be true, or capable of straightening up the edge by hand!!. If you measure off the blade and set your marks carefully, you can clamp (or screw through both pieces if you can afford to have little holes in the Work) the guide-board to the piece being cut and slide the edge of the saw base along the straightedge.

One caveat is that the saw blade and the saw base must be in excellent alignment; if a problem, you can add an auxiliary fence to the saw-base out of wood and sand or plane it to perfect alignment.

Something better I have found, and certainly faster - if your project involves identical parts to be cut - is carefully making full-sized patterns out of 3/4 ply or MDF and then rough-cut the pieces to be produced oversize. I cut all the pattern edges with a straightedge and router. Then screw or clamp the pattern to the work and use a router with a pattern-cutting bit and trim off all of the waste around the whole piece. Once the Pattern is good, this method is VERY FAST. Good Luck!

Note that you can make something roughly similar to a track saw by throwing together your own saw guide. Cut about a foot off sheet of plywood so you can use the factory edge as a straight edge. Glue-and-screw that on top of another layer of plywood, with its straight edge set back from the lower layer's edge by a bit more than the distance from the edge of the saw's baseplate to the blade. After the glue has set, run the saw along the straight edge to cut the bottom layer to exactly match that measurement of the saw.

Now you can line up the newly cut edge of this jig exactly with the line you want to cut, clamp it in place, adjust the depth of cut, and once again use the top layer as an edge guide for the saw. It isn't as precise as a fully-guided saw, and it isn't zero-clearance on both sides of the cut as the track saws are --- but for most purposes it's more than good enough.

You can make this fancier by adding a right-angle stop at one end, T-square style, to make it easier to align.

The same concept works with routers too, if you want to cut a straight dado. Remember to think about direction of cut; you want to move the router from left to right, so the spin of the bit will tend to push it more rightly against the reference edge rather than pull it away. If you have a fresh right-angle piece on the router jig, your first pass can cut the dado into that as well, giving you a clear view of exactly what will be cut, which can help reassure you that you really do have the jig in the right place.

(Too many words, but Stack Exchange frowns on just posting pointers to articles elsewhere. However, a bit of websearching will find nice illustrations of exactly what I'm describing.)

This can also be turned into a poor man's panel saw, by the way: Set up braces to support the panel, attach this guide at the right place, clamp, crosscut or rip. One of the woodworking magazines had a cute set of wall-mounted supports for exactly that purpose in a tips column some time in the past few years.)

There are good answers here that involve using a track saw or making a jig so that a circular saw that was not originally intended to be used as a tracksaw can be guided accurately along a straight line (keshlam). When using a tracksaw, the wood needs to be sitting on a sacrificial surface to avoid blade damage. While saw horses can be used for this purpose, they do not provide support for every inch of a typically large piece of plywood. This lack of support can make it difficult to achieve the highest level of precision. I use an 8' x 4' sheet of 1/2" or 3/4" foam board insulation laying on a hard/flat surface and lay my plywood on top. This provides support for the entire sheet and allows me to walk/crawl on top of the plywood and avoid awkward cutting positions that are detrimental to accuracy and safety.

Sounds like you have a portable tablesaw. If you like your particular model, buy a second one, then clamp or bolt them together side by side for big stock. Leave them separate to have two setups available at the same time (e.g. two different blades or two cuts), or leave the second one set up as a router table. The two table saws do not need to be same make/model for this, and the second one could be bought used with a burnt out motor or cracked base.

Realizing it is a bit late to help the OP, I am personally a fan of the track saw.

One trick I have used to get a repeatable cut is to set a combination square to the desired width. It is very quick to lay the track on the wood, set the square in place, and slide the track to but up against the square. Do it at both ends, then double check for movement. Depending on what I am doing I may use track clamps to make sure nothing moves after it is set. Do a test cut to make sure you properly accounted for things like blade width and adjust the square as necessary. Once you have things fine tuned you can repeat the same cut as many times as you like with very high precision.

This technique definitely gives me better results than I ever got with my table saw, and, for me at least, is faster and easier than trying to run a full panel and keep it tight to the fence. Also, keeping notes or a reference block around means I can switch cuts and come back to the same spacing at a later time without having to make or keep track of multiple jigs.

Not the answer you're looking for? Browse other questions tagged woodworking cabinets or ask your own question.

10
What is the recommended number of teeth for making finish cuts with a miter saw?

5
Mitre Circular Saw blades for cutting Oak floorboards
0
Basic instructions for building a cabinet?
6
Can I build a vanity, or am I in over my head?
1
How to cut a 4x4 fence post lengthwise and at an angle?
5
How to connect two bed legs to make a bunk bed from two regular beds?
1
Tooth Count for 6 1/2 inch Circular Saw Blades
2
Alternatives to circular saw for cutting 2x6 wood?
0
Making a square - Joining two pieces of wood cut at 45 degrees with a circular saw
5
How can I square up slots cut with a circular saw?
4
Can i use larger/smaller circular saw blades on my circular / plunge / table / miter saw?