How can I repair this damaged air compressor?

I have an 8 Gal CH air compressor (HM700099AV). Purchased about 3 years ago. Used for a few months, then stored behind other items in a shed and never drained until a year later. At that same time, the bottom twist valve (underneath the tank in the center - it's an upright tank) broke off at the stem. I used another smaller tank since then but want to try and fix the 8 Gal tank now. Air leaks out the hole in the bottom of the tank now where a broken valve was.

The bottom twist valve broke off and I think a thin rod about 12-15" long came out. I don't recall as it was a couple years ago and I had 5 kids running around that day. I put the tank aside again, but am taking a shot at it today. It was about $160 new and worked great when it was cared for properly.

If a rod did come out, what parts do I need to fix it?
Is it possible that this not worth it to repair?

I'm not sure what the rod might have been, the inside of an air tank is pretty simple.

Replacement drain valves are available in a variety of configurations, and generally they thread into a nut welded into the tank. It's then just a matter of finding an appropriate replacement valve (relatively easy) and removing the old one (probably much harder). 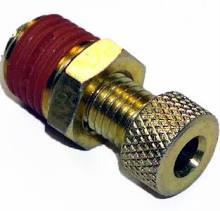 To help get the frozen valve out, you could (should) try penetrating oil to free what are almost certainly frozen threads, but you may need to step up to using a torch to apply heat to help break the part loose.

Not the answer you're looking for? Browse other questions tagged repair compressor or ask your own question.

1
How do I secure a steel rod inside a blind hole of a silumin part?
2
How can I repair these rusty electrical connections?
1
Does this tub repair method sound legit?
1
Propane tank to air tank conversion
2
Switching power to an air compressor
0
How can I repair a leak in my anti-siphon spigot?
0
Fridge coil won't get cold
3
Dual flush toilet woes
0
What is the best way to remove a broken screw from a deck board?