what is the woodworking technique used to build this piece?

I'm interested in building a side table similar to the one shown in this link. The woodwork technique looks complicated for an inexperienced builder (like me). How was this piece built? 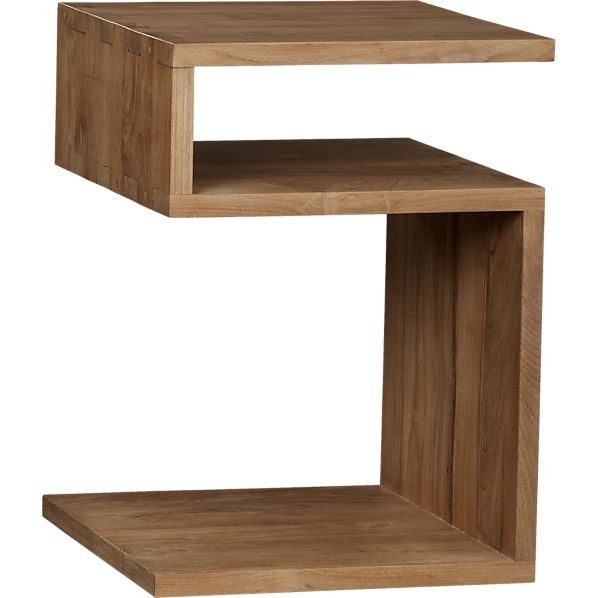 This is a box joint. Some might call it a finger joint. Here I've cut out a small piece of one of the blow ups on the site. 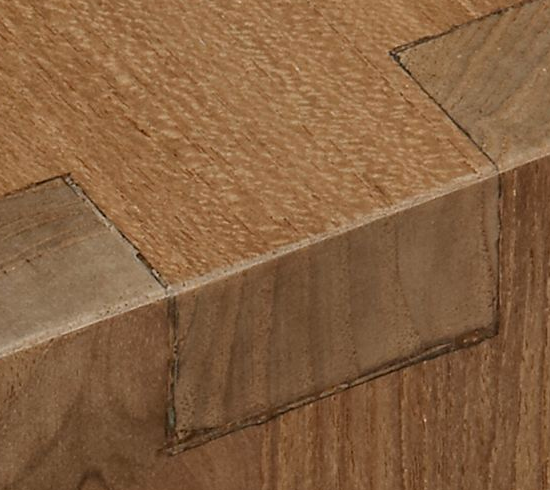 Note the straight sides. The idea is the pieces mate together, indeed like the fingers of two hands, set to cross alternately. Without glue of course, the joint would have no strength at all. By the way, in my opinion it is a relatively poor example of a box joint. See that there are voids along those joints, that were then filled, probably with a wood filler.

A dovetail joint would have angled sides on the mating pieces, looking something like this (from Wikipedia): 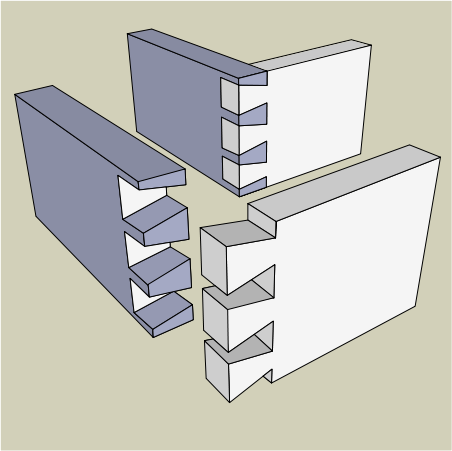 You can see the difference is in the angled faces.

How was the table built? It appears as if this was done by hand work, or if a table saw was used, measurements were not done with perfect accuracy. Were I to do this, I'd use a router table, with incredibly precise bit placement, enabled by a good router fence, like an Incra-fence. A table saw would not leave flat bottoms between the fingers (UNLESS you have a good dado blade. Cheap dado blades will not do that.) The cuts CAN be done by hand work with a saw and chisels, but to do that with sufficient accuracy, it would require a fair deal of skill with those hand tools. IF you were to try this by hand, start out with some practice pieces of wood. Make a dozen joints first, only then would I trust your skill with the tools. Practice joints are a good idea anyway, with any tools.

You might check out some videos about making box joints. Youtube has lots to be found, like this one, where a table saw with a dado blade is used. Or this one, where you can see it done by hand.

Can you do this better? The fact is, the table you would get from this joint will not be terribly strong. A far better choice would be to use dovetails, which will resist torsion better using the physical shape of the dovetails, as well as glue. See that the fingers here mate along faces that can resist the torsion ONLY by means of glue. A dovetail joint is clearly stronger.

If you cannot manage a dovetail joint (I assume this is to be by by hand work, so using only saws, chisels, etc.) then I would strongly suggest that a stronger joint will be found by having MORE glue surface. The fingers in such a joint are plenty strong enough. If a box joint like this will fail due to torsion, then it will fail along those glue joints. So I'd suggest at the very least, using more glue surface here. That is, instead of having fingers that are 2 inches wide, make fingers that are about 1/2 inch side, thus creating very much more surface to be glued because there will be more fingers. Yeah, I know, it will make for more work. Do you want it to last? Really, best would still be accurately cut dovetails.

It does not appear as if any dowels were used here. BUT, to be honest, were I to build this table, I'd consider finding a way to insert small dowels, hidden inside each joint so they cannot be seen. This is easily doable. Again, the idea is to build the joint so that it resists torsion by more than simply glue surface.

Finally, as people will state, a well made glue joint is stronger than the wood it joins. HOWEVER, the glue joints I see in the picture above are not that terribly well made. There are clear voids. The mating faces are not that tightly mating. If this joint fails, which can easily happen, it will be by the fibers of those fingers tearing in shear, but it will happen along those glue joints. You can see joint failure happening in this video. Essentially the fibers right next to the glue joint will be seen to delaminate.

This particular piece is joined with finger joints, also know as box joints. This joint is similar to the dovetail joint as suggested by DA01, but the straight shoulders of the "fingers" joining the boards (can be better seen in one of the pictures linked) mark it as the plain finger joint. Dovetail "tails" have an angle to them.

Finger joints are easier to make than dovetails, and can be done in a variety of ways - on the table saw, band saw, using a router or even with hand tools (just a saw and a chisel). Compared to the dovetail joint where you need precise angle matching, in the finger joint all the angles are 90 degrees. The strength of the joint comes from the increased glue area, allowing for long-grain to long-grain gluing, rather than the mechanical advantage of the dovetail joint.

It's board joined together using a dovetail joint.

4
Good technique for squaring-up hardwood edges?
22
How would I go about turning a tree in to a tabletop?
0
What is this technique of joining wood called?
2
What kind of joints are best used for a loft bed?
1
which is the best wood for a patio set?
0
How do you bend stair rails?
0
What does a Mitre Saw offer that a Table Saw does not?
0
How to transfer lumber cut with odd angles
7
How large should a hole be for a bolt to go through?
1
Floor standing U wood frame built at home - what to use for a 90 degree joint?