Do dryer sheets interfere with the dryness sensors in a dryer?

I have always used dryer sheets, specifically, to remove the static from my clothes.

I purchased a new High Efficiency Dryer/Washer combo from LG, and they sate that if you use Dryer sheets, you void the warranty.

I read somewhere that dryer sheets interfere with the dryer sensors of the machine, therefore, causing them to not work properly. Apparently, they have a residue that gets on the sensors. I also read that the sensors work by checking the static levels and I am assuming if their is static detected, maybe that signals the clothes are dry and dryer sheets interfere with all this. Are the above statements true?

The dryer sheets shed tiny bits of its fabric. They sometimes coat the sensor. Causing the dryer to work harder, thereby shortening the life of your dryer. This could easily be fixed (if there was an issue) with soap, water, sponge... The same thing goes with the lent filter. Even if you clean out the lint, the very small particles from the dryer sheet can get stuck in the cross-hairs. Also can be fixed with soap, water, sponge...

This is comparable to saying does soap cause tiles to get dirty. Yes but you need to use soap in a shower and can clean a little.

It is hard to tell from what I can find, but there may be at least two different technologies sensing moisture. Any particular dryer would use only one of them.

The first is two metallic strips inside the drum somewhere, maybe on the back wall. If wet clothes touch both strips, the resistance between them is low. If there is nothing but dry clothes touching the strips, resistance is high. Look inside for something like this. If the finish of those are shellacked, then indeed the dryer would stop drying prematurely.

The other is a temperature sensor in the exhaust system. As the clothes dry, the evaporative cooling effect decreases, so the exhaust gets warmer. There would have to be some smarts in the dryer to recognize a trend. However, I can't see how dryer sheets could possibly affect that.

I also found this video at YouTube from LG -- https://youtu.be/DJxkCgLCpgc -- it educates the consumer on where is the drying sensor. AND!!! in the last few seconds (1:51) it shows a dryer sheet IN THE DRYER before clothes are thrown in. THIS IS FROM LG, showing you how to use the dryer. 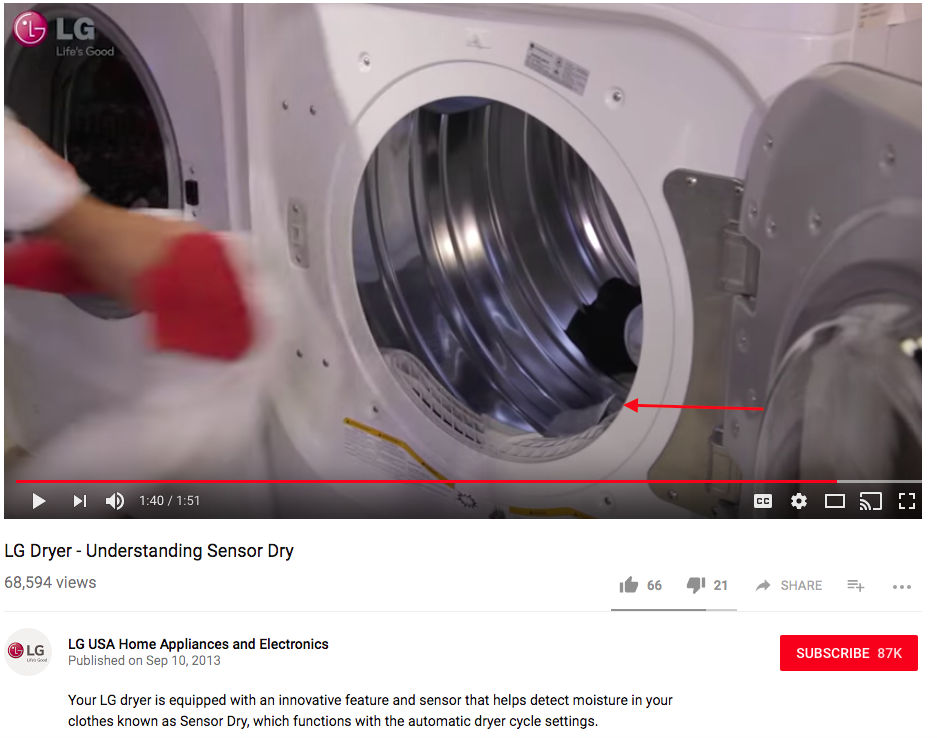 Nonetheless, there are other websites online that do say that the microfibers of dryer sheets do have anti-static chemicals on them which can get stuck in the inner workings of dryers and degraded their efficiency over time or get stuck on sensors. We found the sensor and have wiped it with some alcohol to clean it -- nothing came off it. It was clean to start with. After all, we're only 17 days since it was delivered. But I suppose that if it were a longer time of usage, perhaps there would be residue there that we could have wiped off.

Within the inside of the dryer's duct system, however, it could potentially be a problem. But one would hope that your lint trap would pick up most of those fibers and any related 'gunk' so that it wouldn't be a problem.

7
What could cause clothes to come out of the dryer with tiny burn or scorch marks?
1
What could be wrong with my dryer timer?
1
Can I switch all the stuff from my electric dryer to a gas dryer eliminating the gas burner
4
What is this thing inline with my dryer vent?
0
Frigidaire Dryer with error E64
11
Can a gas dryer be converted into an electric dryer?
4
Dryer Venting Woes - what to do?
1
Dryer vent hose not staying connected to the dryer vent even with clamp
1
Outside dryer vent clogs with lint