How do I move a slab of concrete?

I want to build a fence in my backyard by my garbage stand is sitting on a concrete slab and that slab is in the way of where I want to put the fence so I want to move it over a few feet.

The slab of concrete is 5' by 5'8'' by 6''. I popped those dimensions in an online concrete calculator and it says it weighs over 800kg.

I don't think it is a good idea to try to chain it to my car and drag it.

Would it be possible to move something that size with a lever of some sort? Or should I bite the bullet and just destroy the slab?

I don't agree with any of the comments. It is impractical to move it. First unless you use big equipment the chances of it breaking are solid. But lets look past moving it and say that is "easy". Where are you moving it to? The bottom is probably all over the place meaning that unless where you are moving it to has very similar ground characteristics then this thing will probably not sit the way you want it to.

Added Note: When we are breaking up big slabs like this we often break up concrete. Move the concrete out of the way. Dig down another 10-12 inches (I know it is hard work but doesn't take long). Then put concrete back or at least most of it with about 4-6 inches of dirt over it. You will be left with some dirt left over and maybe a little concrete. You will spend time digging but not time hauling concrete. Also the extra dirt is usually easy to dispose somewhere in the yard.

If the surface of the slab is flush with surrounding ground I'd consider building the fence across the slab. 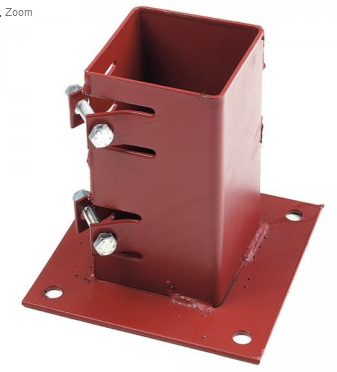 There are more options than "move it" or "break it and remove it." Check with a local rental store to see what sort of concrete saws and/or drill bits are available. You could then saw off a portion of the slab, chip out a trough for clearance for fence rails or drill out a smaller area to allow a fencepost to be inserted. It would save a lot of labor but would cost a bit for rental.

I agree with Mike, you never know what you can do until you try. I had a 8'x12'x3" slab from an old shed that we needed to move or destroy to plant trees for a screen. The slab had two cracks that ran front to back which essentially divided it into 3 smaller 8'x4' slabs which I was able to move by myself by prying each piece up, sliding 2x4 scraps to hold the elevation, used 1" pvc irrigation pipe (because I had scrap left from replacing the old system) for rails and pulled with my truck and a tow strap. I'm not sure if I could have moved the whole thing in one shot, but in six hours I had the three slices moved and replaced in another spot about fifteen feet away.

I agree with all said, but I'm more of a do or replace kind. Just wrap a tie rope around the edge an connect the other side of the rope/strap to the bumber of your car. Pull it where you want. If it doesn't sit right, sledge it and remove. It's fairly cheap to pour a new 25 sq.ft. slab. If it won't pull, sledge it. Otherwise, after you move it, hit the under side (edges of the slab) with water and see if it will settle (do arobics on the slab). Sounds like it's not a structural pad so not to worry too much if it takes time to settle.

Considering the enormous amount of brawn involved in demolition + transport + disposal and then the formwork + transport + mixing of 800kg of cement, moving the slab is far less work, far quicker, and far cheaper. Regardless of the labor and expense of demolition approach, the manufacture of cement carries a very large carbon footprint. R&R would be a -1 for the environment.

The underside is likely very rough. If you are willing to risk breaking the slab, it could be pried up, rails slipped underneath, then slid over. 3" pipe or some such could be used for rails. If you want to move it over N feet, the rails could be as short as 3+N. Pry up one side at a time, using something between the lever and slab to distribute the pressure. Lifting one side with a single 1:10 lever is: 0.5 * 800kg * 0.1 = 40kg = 90lbs ... that's completely doable by one person for anyone weighing more than 90lbs.

Alternatively, an off-center tripod could be built over the slab, and a come-along used to hoist the slab.

Alternatively, if it is to be moved it over N feet, then rails that are about N+1 feet long would suffice. This method combines the previous two. Pry up the slab and place the rails under the slab aligned with the far edge. Build an A-frame and stand it a foot away from the near edge. Run a strap around the slab at the near edge, attach a 30ft rope to the strap and route the rope over the A frame. Lean the A-frame towards the slab, then heave on the loose end of the rope while standing 20-25ft away. With enormous leverage, this will cause 1) the A-frame to become perpendicular, 2) lift the near edge of slab, and 3) pull the slab towards its new position by, say, 6", the far edge of the slab sliding along the 3" pipe rails. Reposition the A-frame and repeat.

Note: created this answer out of my several comments, added the 2nd alternative, then deleted the redundancies.

Not the answer you're looking for? Browse other questions tagged concrete removal reuse or ask your own question.