How to fix a ventilation pipe to the wall?

I'm doing some renovations in my toilet/bathroom, and am currently pondering the ventilation. Here's the current situation (click pictures to get bigger versions):

My toilet and bathroom are right next to each other (yes, they're tiny. It's a Soviet-era building). The bathroom is on the left, the toilet on the right:

The toilet has a 10cm by 20cm hole in the wall between it and the bathroom: 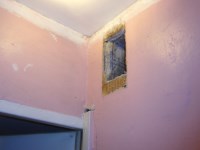 On the other side of the wall there's a metal pipe placed in the hole: 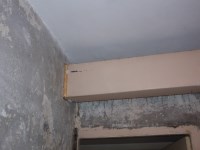 The pipe spans the width of the bathroom and enters a similar hole on the opposite wall: 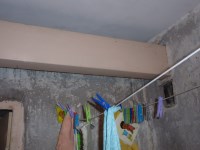 What I want to do is place fans in both ventilation holes (for the toilet and for the bathroom). The only fans I could find where of this type: 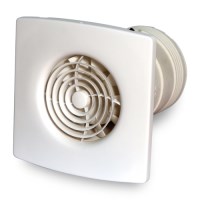 The smallest one had a diameter of 10cm; it's depth was greater than the thickness of the wall between toilet and bathroom (the rear end sticks out a good deal on the other side); and the face-plate (being a square) doesn't fully cover the hole in the wall. I even had to knock the holes in the wall a few mm bigger for the fan to fit in there at all; and the current metal pipe is about 1cm less wide than the hole, which means that the fan cannot possibly fit in it.

That pretty much means I'll need a new pipe. I don't mind, because the old one is pretty unsightly anyway. The new pipe will most likely be circular (I haven't seen rectangular ones like this in the store) and unlike the old one it won't be able to support itself by being placed inside the hole (since the hole is barely wide enough for the fan, there's no room for the pipe). That means that it will need to be somehow attached to the wall and the remainders of all the holes closed.

What is the best way to do this? I can imagine buying the right length of the pipe (which will then need to be very precise in length), and maybe three metal (or plastic?) plates with appropriate holes cut out... but how to stick it all together? And it would also very much then depend on the pipe being the proper length (exactly the width of the bathroom). A few mm longer or shorter, and it's unusable. That worries me.

Is there some other approach or some tricks that can help me?

There's a number of things you could do, this is one I would do in your situation. These fans are made to fit inside sheet metal ducts. Go ahead and get 2 lengths of this stuff. You will end up with a joint somewhere in the room, but then the duct can run fully through both walls and there's enough slop in the fit that precise cutting is not needed.

Because of the joint, you will need a hanger support that anchors into the ceiling, which I assume is concrete. You would need a hammer drill to make the hole necessary to insert an anchor stud to which the hanger can be attached.

This is not the most attractive thing in the world, but it can be painted so that it's not too objectionable. Painting exposed ductwork is done intentionally sometimes as a desirable (to some) "look". You could also construct a soffit box to contain the duct, you end up with a sort of stair step on the ceiling. Given the extra work for this, it's easier to like the painted duct look.

To fill in the holes, get some cement backer board and cut to the size of each opening. Also cut holes to fit the duct or fan. For the size involved, the boards can just be glued in place with construction adhesive. You can also glue in some backup cleats behind the boards to increase the glued surface area if you like. The boards should be recessed about 15mm from the wall surface. The remaining space is filled with portland cement plaster in 2 or 3 coats. It is an obvious patch, but it sort of matches the wall and would be hardly noticeable if the walls are to be painted.

Not the answer you're looking for? Browse other questions tagged bathroom pipe ventilation or ask your own question.

2
Bathroom vent pipe going down instead of up? Is it OK?
3
How to avoid water build-up in bathroom's passive ventilation shaft?
3
Can the drain pipe in my bathroom vanity be turned to the side?
3
How can I re-use a hole in wall for ventilation?
2
Which alternative will be more efficient and beneficial for Bathroom Ventilation? How?
8
Is there a way to thaw a frozen pipe, if you can't access the pipe?
3
How is a toilet flange attached to new flooring?
3
Bathroom vent where there already is one?
2
Best type of fan for sucking air through a small hole?