Should I redo my bathroom shower or try to waterproof it?

We just had our bathroom redone (including built-in tiled shower). The shower tiles are now leaking through the wall into our living area.

Our contractor suggested to just apply a waterproofing solution to the grout lines (especially floor/wall join where we suspect the leak to be), but I am worried this is only a temporary solution.

So, will a waterproofing solution (such as UFIXX No Leak) work permenantly, or do I need to get the tiles re-installed with the waterproofing re-done?

The bathroom is only about a month old. 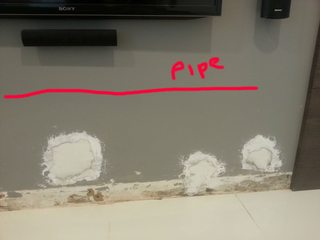 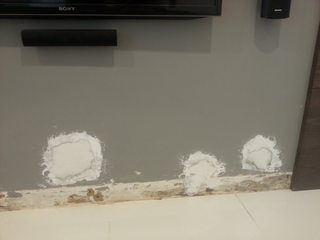 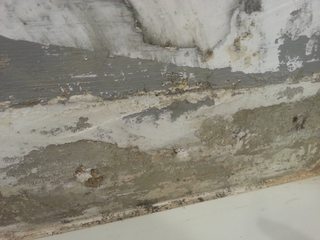 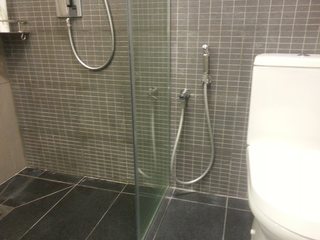 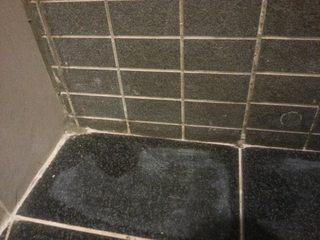 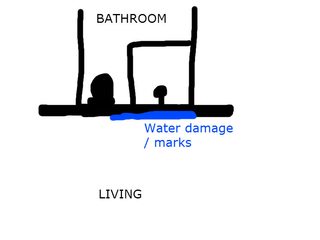 The white marks are where the contractor drilled/dug to investigate.

We noticed the water marks above the skirting, and when we removed it, it was soaking wet and the plaster was soft and you could dig it with your fingernail.

The contractor assures me it is not the pipes, as they are higher off the floor so we would see damage higher up. The damage is the worst at floor level, pretty much opposite where the shower cubicle is (and where water pools during showering, soon drains and leaves just a thin film that will evaporate)

Do you have a basement? What is under the shower?

It's a low-rise apartment (2nd floor) so it's another unit below.

Is that sheetrock or cement board? Is there any waterproof membrane (rubber, plastic or paint-on?) under the tile or board? Have you determined which side the water is coming from?

The floor (under the tiles) seems to be concrete, the wall between living and bathroom is solid but I am not sure of the material (he had drill/chisel the holes to investigate, brick or concrete or something similar). The water is coming from the bathroom, we have not used the shower in 2 days and the wall has dried up considerably.

Also: water pooling when you shower = sign of really bad contractor. At this point, I'd start over. Gut and rebuild

I maybe was unclear, it doesn't pool for long, drains in 30-60 secs until there is just a thin film of water that will evaporate.

Final Edit: After much investigation (5 different contractors/plumbers) it was determined that there was a leak in the building column next to my bathroom that carries waste water from all the units (5 high, I was number 2). Although the below accepted answer would probably be considered correct for most cases, in this case it was nothing to do with the work done in my bathroom (just happened to occur just afterwards).

Everybody got distracted looking for what was wrong with the new bathroom work, not realising it was an issue with the common pipes in the building column. Perhaps others will learn from this, to think of other possible causes too.

I honestly don't even see how a poorly done tile job can leak this quickly. I can tile and grout a wall pretty sloppy and it will be good for at least 4-6 month and possibly a lot lot longer.

The short-term fixes you can do now are exactly that at best - short-term. It is possible that you will spend money trying to waterproof after - which in no way is ever the answer - and it could possibly have no impact.

You need to get your money back from this contractor. Even a bad contractor puts up some sort of water barrier in a shower. A bad contractor would put up the tile with a bad grout job or wrong grout and maybe the drywall gets wet and eventually moldy. Your contractor either has no clue or is insanely lazy. You cannot let him back in your house.

Since the plaster wall (hopefully drywall) has gone soft, I'd open it up. Cut out a section from the floor 2' up (I pick 2' since you can see a lot but still use a half sheet of drywall to repair it, leaving the other half to repair your repair). You don't want to leave drywall that's gotten that wet installed anyway.

For it to get this wet this fast, I can come up with the following guesses:

That said, without a water barrier behind the tiles in a shower, you've got a time bomb. Even if you fix the current problem, the tiles and grout are porous and will slowly leak water into the structure of your home, causing it to rot and mold. They shouldn't leak so fast that you'd see the current problem, but they will leak. A surface water proofing will help, but it won't prevent it.

Not the answer you're looking for? Browse other questions tagged repair leak sealing tiling or ask your own question.

7
Is my shower drain leaking under the slab?
3
Locating a leak, water on top of kitchen cabinents, under two bathrooms and drain stack
3
How can I fix/polish a slate tile imperfection after it has been laid down and grouted?
2
How can I fix my leaking shower?
0
Damp on the ceiling of the flat downstairs looks like a leak - what should I do?
2
Unusual tub leak
1
Tile shower is leaking
0
How do i waterproof the joists under my bathroom floor?
2
How high is shower waterproofing treatment supposed to be?
0
Clear Marine Vinyl Sheet On Bathtub Surround To Temporarily Waterproof Walls?