How do I use a Stanley IntelliSensor to locate the joists/crosspieces in my ceiling?

Six months ago I posted a question about fixing a circular light fitting to my plasterboard ceiling and thank you to bib for a really detailed answer. Returning to the problem I have borrowed the above sensor but it seems to beep randomly so have not been able to find the wood behind the plasterboard. Does anyone know how these wretched things work? 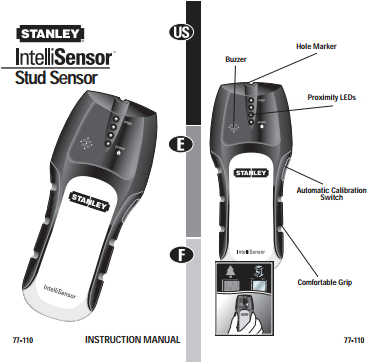 Note: While calibrating, the IntelliSensor™ Stud Sensor must not be placed directly over a stud, dense material such as metal, or over a wet or newly painted area, or it will not properly calibrate. Move to a different location and try again

The proximity of electrical wiring or pipes to the surface of the wall may cause the IntelliSensor™ unit to detect them as studs. You should always use caution when nailing, cutting or drilling in walls, ceilings and floors that may contain these items. Always remember that studs or joists are normally spaced 16 inches or 24 inches apart and are 1-1/2 inches in width. To avoid surprises be aware that anything closer together or of a different width may not be a stud, joist or fire break.

There will be no difference in the function of the IntelliSensor™ Stud Sensor on surfaces covered with wallpaper or fabric unless the coverings used contain metallic foil or fibers.

Unless lath and plaster construction is excessively thick, there will be no problem with proper functioning of the IntelliSensor™ unit.

When dealing with a rough surface such as a sprayed ceiling, utilize a piece of cardboard when scanning the surface. Run through the calibration technique described earlier with the piece of cardboard too, to assure best performance of the unit. Also, it is particularly important in this application to remember to keep your free hand away from the unit.

Utilizing the procedure of scanning and marking from two sides, the IntelliSensor™ unit will find the stud center within 1/8" accuracy for wood and 1/4" accuracy for metal.

When measuring a wood stud under 3/4" drywall, it is recommended the IntelliSensorTM to be used at 35-55% relative humidity.

Not the answer you're looking for? Browse other questions tagged drywall ceiling light-fixture joists or ask your own question.

1
How can I attach a light fixture to plasterboard?