Before anything else, here's a visual aid (embedded below) to help you through this wall of text.

My friends and I are renting a second-floor apartment that’s basically one long corridor split into rooms. On one end is the big(ger) bedroom, whose window faces a major thoroughfare (window A). On the other end is a smaller bedroom, whose window faces a quiet street in an adjacent development (window B). In between them is the living room, whose only window consists of a rectangular opening near the ceiling on the wall shared by the big bedroom (window C). The living room has no exterior windows at all, and is not near enough the small bedroom to benefit from any airflow through window B.

We always keep window A closed to keep out the noise and pollution, but that means the big bedroom and living room hardly get any air and, being in a tropical country, the heat builds up like whoa during the day. Since we didn’t want to depend on airconditioning and are unlikely to be allowed to implement major renovations, I did a bit of research and found that mounting fans in window A and C might be our best option.

For the big bedroom, I designed a vertical sort of housing to be fitted with four fans (or a pair of twin fans). The upper two should draw the hot air out of the room, while the lower two should draw air from outside, but through a filter sandwich. This setup is to be mounted somehow in between the sliding glass panels of window A. We should be able to turn off each fan individually, using switches. The whole thing should be easy to clean, with the filters easy to replace (or remove for cleaning).

For the living room, I have this vague idea of installing a pair of fans in window C, but that seems to mean that I’d be dumping the hot air from the living room to the big bedroom, which ultimately means that window A’s four-fan setup will be handling two rooms. I’m not sure if it can even handle that.

A note on the diagrams: the colors for the four-fan setup are just to help me distinguish surfaces/components. The actual product, should it see the light of day, will likely just be painted white.

Any feedback is appreciated. I’m no ventilation expert (obviously); I just google stuff a lot and spend way too much time with Sketchup. If you guys have any other ideas, I’d love to hear them. 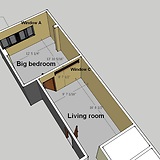 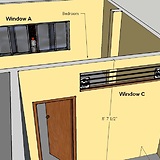 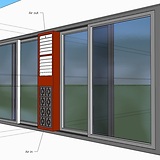 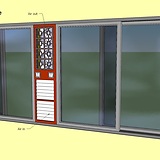 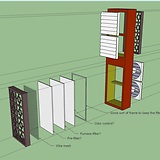 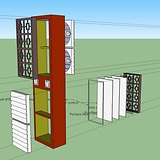 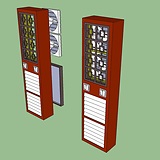 If you have ANY traditional AC system this is a terrible idea, it is allowing a significant amount of conditioned air to naturally transition outside.

If you already reliant on natural air flows and fans, can time it right to feed cool air in, and use some insulated panels to manually block either/both sides not in use it will help. Also, fans are typically (manufacturer specs can greatly differ) more efficient the larger they are, the longer the blades the more curved they get because they are laterally spinning faster at the same RPM; so if you double the width you could place a fan on each half.

Even with this, seal and insulate all areas possible. Most caulking is relative easy to remove so I'd caulk the fan in and remove during the cold season. Insulating and blocking off windows that you don't mind blocking, like bathroom windows already with heavy privacy shades or ones facing the non-sunny side. There are plenty of additional, and better, ways but I can't think of any other right now like these that you can do to a rental and on a budget.

Not the answer you're looking for? Browse other questions tagged ventilation fan or ask your own question.

3
How can I improve air flow in my basement?
3
Can I increase air volume by adding more fans?
2
How can I add ventilation to my basement office?
5
How can I improve ventilation in my room with a window fan while filtering pollen from a nearby tree?
2
How effectively a pedestal fan blowing inward can bring the outside air if kept 2 feet away from a fully open window?
2
Need a window exhaust fan with louvers that close automatically
1
Can I vent a window air conditioner through a joist space for 30 feet?
2
Curtains for a non-air-conditioned apartment in the tropics